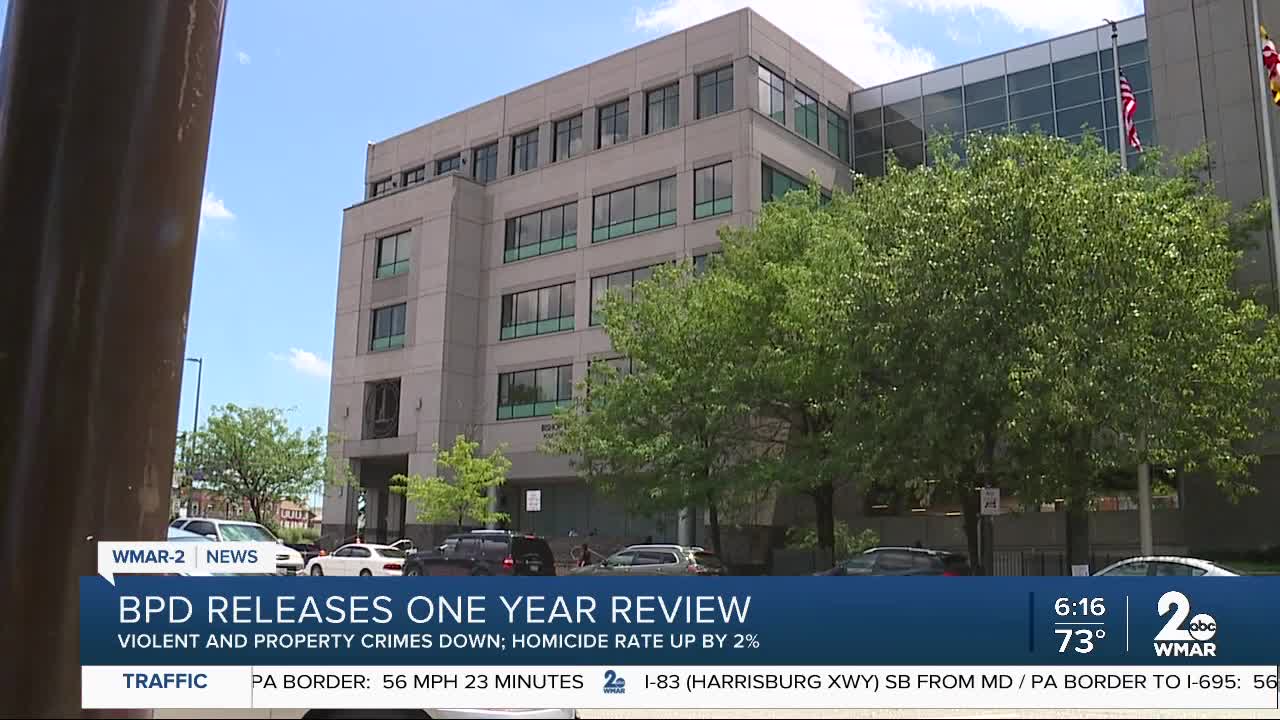 BALTIMORE — The Baltimore Police Department on Wednesday released a first year review of its Transformation Plan and Crime Reduction Strategy.

Some of the highlights in the 18 page update include the moving of the police training academy to the University of Baltimore and the Central District station to the old Baltimore Sun building.

The department also touted staffing changes including the hiring of 42 civilians to positions previously occupied by sworn officers, and the formation of a new unit that helped return more than 100 medically suspended officers to full duty.

According to the review, the department reduced their training academy by eight weeks, which gets recruits on the streets quicker and allows for six academy classes annually.

Hiring is also reportedly on pace to increase 33% from last year, the department says.

Though homicides are up from this time last year, the department says violent crime overall is down 12 percent.

Some of that credit they say goes to the launch of the Baltimore City Intelligence Centers, where analysts provide officers with real time information.

So far analysts have only been assigned to the Eastern, Western, and Southwest Districts.

Despite the apparent spike in hiring and decline in overall crime, the FOP has been critical of Commissioner Michael Harrison's leadership on both issues.

"While statues are being toppled in Baltimore, our citizens continue to pay the price for the devastating lack of leadership at the top of the Baltimore Police Department. They should demand change NOW! (BPD still 500 officers short!)," the FOP tweeted on July 5.

The FOP followed that up with this tweet the next day.

The department also reports exceeding their goal of responding to 911 calls within 10 minutes, even with two stations having to temporarily shut down, and 500 officers having to quarantine over possible COVID-19 exposure.

On July 9, the FOP criticized the department's response time to a water rescue at the harbor, tying it to the city spending board's recent decision to defund the Marine Unit.

Digital and technological improvements were among other subjects noted in the review.

Electronic Ticketing Software has been installed in patrol cars, which issues traffic tickets at a much faster pace than hand written citations.

The department says they've procured new digital records management systems that will transform the agency from being paper-based.

Officer wellness was also addressed in the review, though the FOP has repeatedly accused city leaders of not supporting their members.

The review claims 2,100 officers were given stress tests, while 24 were trained to provide emotional support to co-workers and their families.

Finally, the department says internal investigations are taking an average of 9 months to complete, down from a previous average of one year.

Officers facing minor allegations of misconduct are now having their cases handled more swiftly as part what the department call an "early resolution process."

Internal affairs has increased their staffing from 16 to 23 detectives.

The way complaints against officers are handled is one of the main components of the current consent decree.

Read the entire review below.

BPD - Year One Review[2] by Wmar Web on Scribd