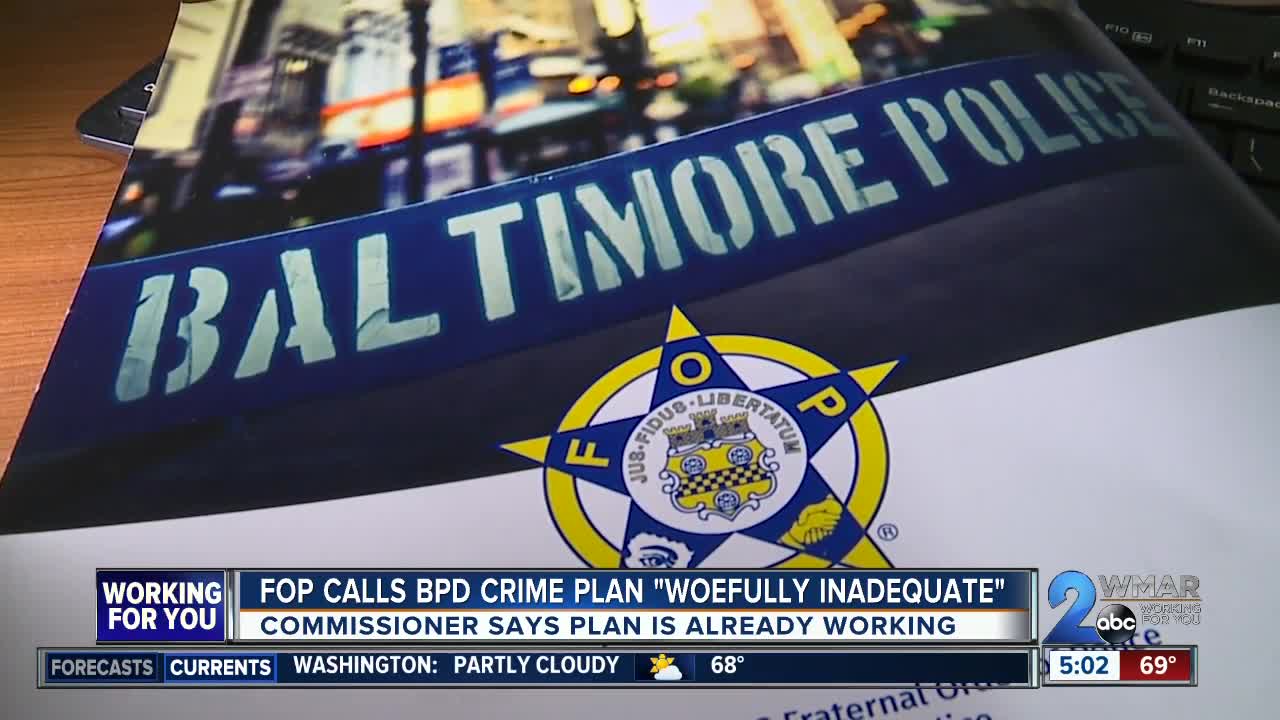 The Baltimore Police union on Tuesday issued a scathing report in response to Commissioner Michael Harrison's crime plan that was released in June. 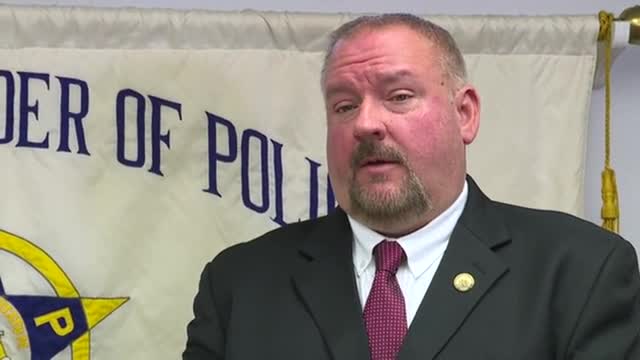 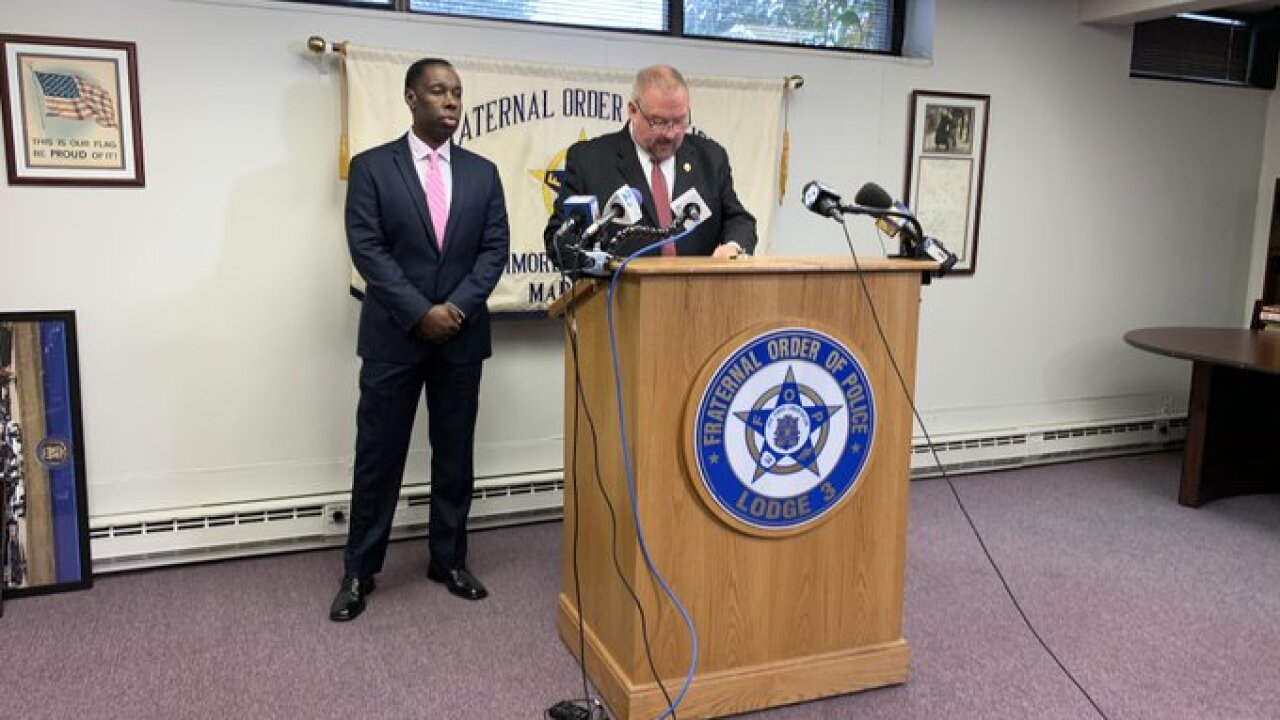 BALTIMORE (WMAR) — The Baltimore Police union on Tuesday issued a scathing report in response to Commissioner Michael Harrison's crime plan that was released in June.

In the report titled "The Mismanagement of the Baltimore Police Department and its Impact on Public Safety," the union describes a department in ruins.

The union says since Harrison released his plan, the City has averaged one murder per day.

At the time the report was written, the FOP says homicides in 2020 were up 23 percent while non-fatal shootings increased 24 percent, with gun crime overall up 23 percent.

Union President Mike Mancuso says Harrison's plan has zero specifics or promises on how to fix the problem, but instead focuses on political correctness.

A major concern the union raises in the report, is the mishandling of staffing and personnel.

The FOP says the department's human resources section uses two databases to track employees, and that each one has differing information and is inconsistent with the other.

In their research, the union says they found several examples of how the databases can be misleading on what staffing resources are actually available to the department.

According to the union, one of the databases shows two convicted former GTTF officers are still active and employed with the agency. The database also says 70 other officers that have left are still there, and 200 who are employed aren't even recorded in the database, including Harrison himself. Meanwhile former commissioners Darryl DeSousa and Kevin Davis are still listed as active acting commissioners.

The union insists the databases are capable of correctly keeping track of the department's staffing, and Harrison's wish to spend hundreds of thousands on improvements and a new vendor are unnecessary.

According to the FOP, the larger problem is lack of communication, real time data entry, and information sharing, all of which Harrison pledged to improve.

The union thinks the problem can be fixed with different allocation of sworn and civilian staff members.

The FOP says out of all the new civilian hires, they know of none that resulted in any administrative officers being placed back into the patrol division. They say 22 percent of the civilians have been placed on Harrison's executive team instead of where they're truly needed.

In their report, the FOP says practices like this have caused patrol to be severely understaffed.

The FOP says they found that 20 percent of officer's hired since 2018 have left the agency, while 15 percent hired in 2019 have already gone.

Union officials say 1100 officers are needed in patrol, and they're currently 450 short of that number, forcing officer's to work exorbitant amounts of overtime.

In addition to staffing more efficiently, the FOP says the department should attend more job fairs and offer better benefits and retirement packages, to compete with other local departments.

In the meantime, the FOP feels their members aren't getting any support from Harrison or his command staff in their effort to fight and reduce crime.

Another one of Harrison's goals was to create a streamline chain of command intended to better outline a commanders duties and to better hold them accountable.

The FOP says that hasn't been the case so far. They say Harrison suspended weekly commander accountability sessions that normally happen during Comstat, and accuse Harrison of missing more meetings than he attends.

Sometimes, according to the report, supervisor's order officers to do things conflicting with the consent decree, leaving them confused on how to do their job.

Harrison responded later by saying "The management they're referring to are now demonstrating reverse of trends and crime. The number they're citing is outdated because those trends have shifted in a different direction and we're seeing a very different number now then they're reporting that we saw in the summer. The management that was non-existent earlier, that's in place now with great levels of accountability and transparency, while showing a reduction in overtime spending with good systems of accountability in place to insure that happens to make us good stewards of the citizen's tax dollars."

The union also took a swipe at City State's Attorney Marilyn Mosby, saying her policies and decisions are based on personal biases and social beliefs as opposed to the law, causing officer's to hesitate when doing their job.

At a press conference Tuesday afternoon, Mosby said "I was hopeful with the new leadership in the Fraternal Order of Police that they wouldn't have sort of the same divisive political rhetoric. However we stand by and they don't represent every single police officer and that's indicative of the fact my prosecutors work with police officer's every single day." Mosby added she "Will always apply one standard of justice to everyone regardless of sex, race, religion, or even occupation."

In the report the FOP suggests better training, equipment, and communication with officers so they can understand their duties under Harrison's leadership and the consent decree.

When asked about his overall thoughts on the FOP's report, Harrison said "It appears they took what we wanted to implement and build in a crime plan and turned it into a complaint, but they basically regurgitated everything that's in my crime plan."