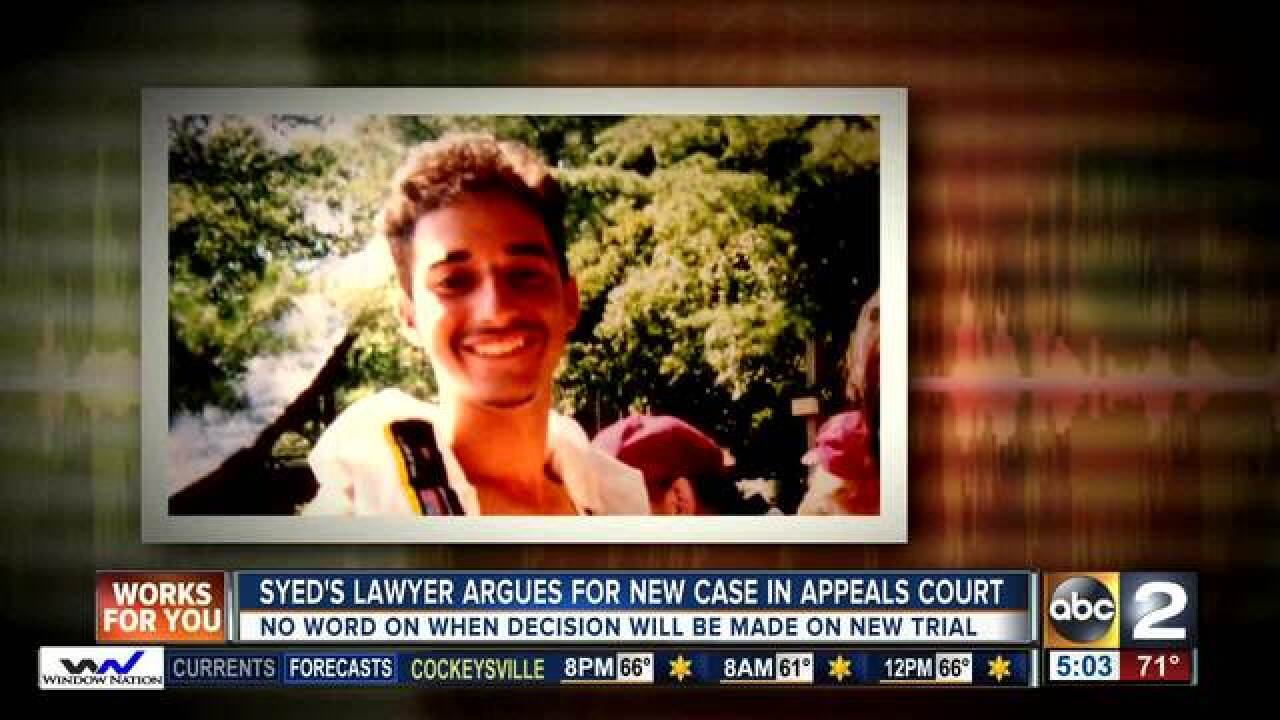 Adnan Syed could be closer to getting a new trial after an appeals hearing in Annapolis Thursday.

Syed was convicted in 2000 for the murder of his ex-girlfriend and Woodlawn High School classmate Hae Min Lee. He was sentenced to life in prison.

His story became national news after it was the subject of the popular podcast "Serial." The podcast raised questions about the case, which were brought up in a post-conviction hearing last February.

Syed's attorney argued he deserved a new trial because he had ineffective assistance of counsel. In June 2016, Baltimore City Circuit Court Judge Martin Welch vacated Syed’s conviction and granted him a new trial.

On Thursday, each side was given 30 minutes to state their case. Syed was not present and neither side was allowed to call any witnesses.

The court will issue a written opinion at a later date. The ruling can be appealed to the Maryland Court of Appeals, the highest court in the state.

On Thursday, Syed's attorney focused on holes in the State’s case, particularly a disclaimer included with cell tower records presented during the trial that specified that “[a]ny incoming calls will NOT be considered reliable for location.” Syed received two incoming calls the day Lee was murdered. The state used those calls to put Syed in the area of where Lee’s body was discovered, and they supported the state’s witness who said he was with Syed at that time helping to dispose of Lee’s body in Leakin Park.

Maryland Special Assistant Attorney General Thiru Vignarajah said the case and appeal highlights the importance of procedural rules. He argued that the Circuit Court erred when it considered a “novel, untimely” claim during the post-conviction hearing having to do with the cell tower records. He added that the court erred in misapplying standards but that it was correct when it denied post-conviction relief for the trial attorney’s failure to interview a potential alibi witness, Asia McClain. The court noted that the late Cristina Gutierrez made no attempt to contact McClain after she sent Syed a letter in prison stating that she remembers seeing him in the library in the afternoon, around the same time the state estimated Lee was killed.

The three judges pressed Vignarajah on whether he had heard of any case where the legal strategy was to not investigate an alibi witness. Vignararajah could not give any specific example but said that Gutierrez’ predecessors looked into the library aspect and interviewed a private security officer that worked there. Vignarajah also alleged that McClain’s testimony may not have been truthful. One of the three judges asked whether the appearance of inconsistencies should have been even more reason to contact McClain.

Vignarajah stated there was no obligation by Gutierrez to call McClain as she was focused on a bigger challenge of disproving a witnesses account that Syed was with him that evening when they buried Lee’s body.

While Syed did not tell Gutierrez about the library, he did ask her to contact McClain. There’s no record she ever did. Prompting a judge to ask how Gutierrez could have determined the testimony was irrelevant without ever speaking with her.

Vignarajah theorized not contacting McClain was a tactical decision by Gutierrez. She was focused on establishing an alibi and the library aspect was a deviation from the timeline she created.

Syed’s attorney Justin Brown, argued that even if it disrupted the defense’s alibi, Gutierrez had a duty to investigate and noted that Asia McClain even left her phone number on the letter sent to Syed. When asked whether any case supports his claim that she was obliged to investigate, Brown was also not able to provide any specific case but said “she just needed to pick up the telephone” and there’s “nothing more powerful for a defense than an alibi.”

In addition, he argued that the disclaimer that came with the cell tower records included instructions that told the reader about how to read and interpret the documents. “It’s like building IKEA furniture without instructions,” said Brown. The jury was not presented the disclaimer and it was absent from the trial record.

“This is a piece of paper that says incoming phone calls are not reliable. It says you can’t use this kind of information, this kind of proof in court. That’s how I interpret that document, so when someone fails to utilize that that’s a defense attorney’s dream,” Brown said in an interview following the hearing.

The state’s cell phone expert later said he was never shown the AT&T disclaimer and that his testimony may have been altered had he been made aware of the information.

Vignarajah saved 15 minutes of his allocated time for a rebuttal to Brown’s argument. He reiterated that McClain’s testimony would not have affected the state’s case that centered on the cellphone evidence. He stated that Syed did not have a defense attorney who did not investigate an alibi and that Gutierrez had reason not to contact McClain. In addition, the Circuit Court should not have allowed the defense to present an argument on the cellphone disclaimer that it was not covered under the limited remand.

“Some things are bigger and more important than technicalities. We’ve got someone who was unconstitutionally convicted, who I personally believe was innocent, who’s sitting in jail right now,” Brown said following the hearing. “We want the courts to look at the big picture and look and see whether this conviction was constitutional. Were all the rules followed in obtaining this conviction? We say there’s severe problems with it and we’re asking for a new trial.”

Vignarajah denied requests for an interview.