Anne Arundel community weighs in on another bay crossing 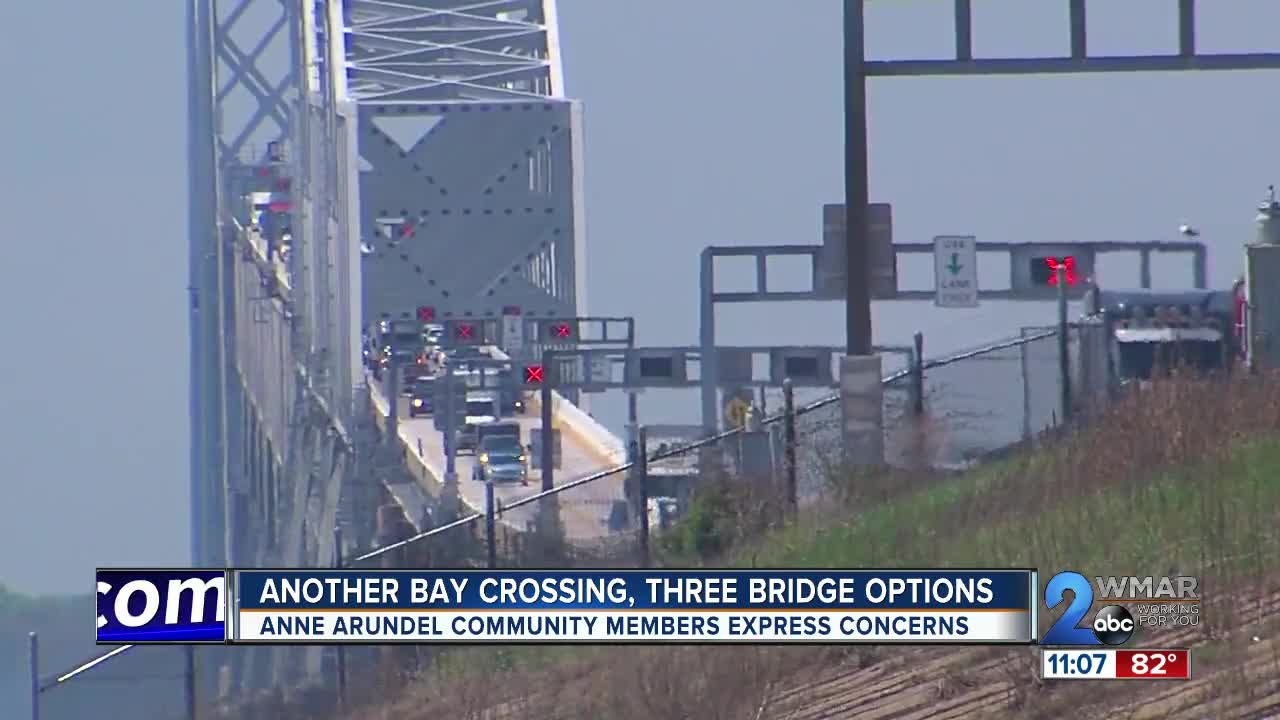 An open house for the Chesapeake Bay Crossing Study took place on Wednesday at Anne Arundel Community College. It was supposed to start at 6 p.m. but the student dining hall was busy before then.

ANNE ARUNDEL COUNTY, Md. — An open house for the Chesapeake Bay Crossing Study took place on Wednesday at Anne Arundel Community College. It was supposed to start at 6 p.m. but the student dining hall was busy before then.

"I was a little disappointed to see how quickly the alternative of public transportation or alternative transportation like ferries and things like that was quickly put off to the side as not a viable source," said Jacqueline Baldini, who lives in Arnold. She's been in the area for the last 13 years, dealing with the congestion.

"I don't think we need a third span if we do electronic tolling and if we do bus rapid transit, carpooling, electric ferry," said Pittman. "Rail line would be a great addition as well."

Maryland Transportation Authority looked into bridge options. Originally there were 14 bridge crossing that was narrowed down to three, all in Anne Arundel County. One is the expansion of the existing bridge, the others would be just north and south of the bay bridge.

"Those three corridors are the ones that best relieve congestion at the existing bay bridge per the studies we’ve done," said John Sales, public affairs for MDTA. He explained how research showed these three options have the least amount of environmental and community impacts. Which made sense to some.

"The northern and southern routes are clearly terrible. They go through parks and nature areas," said Pittman.

"Is relief needed? Does another bridge need to go in? Absolutely! I just don't believe it's in this area," said Peter Julian. He lives in Annapolis and is tired of roads becoming parking lots in the summer. He added, "where's the traffic gonna go? We can't handle it now!"

Most of the people at the meeting on Wednesday lived in Anne Arundel County and were not in favor of another bridge in the same area.

"I've been here when they had the ferry in 49 up to where we are today and every year it gets worse," said Harold Jarboe, who lives in Severna Park.

The community members left their comments and some left searching for answers.

"I'm interested in knowing a little more of the background of how they go where they are now," said Baldini.

The next open house is Thursday, October 3 from 6 p.m. - 8 p.m. at the Talbot County Community Center. You can also submit your comments to info@baycrossingstudy.com. For more information, click here.