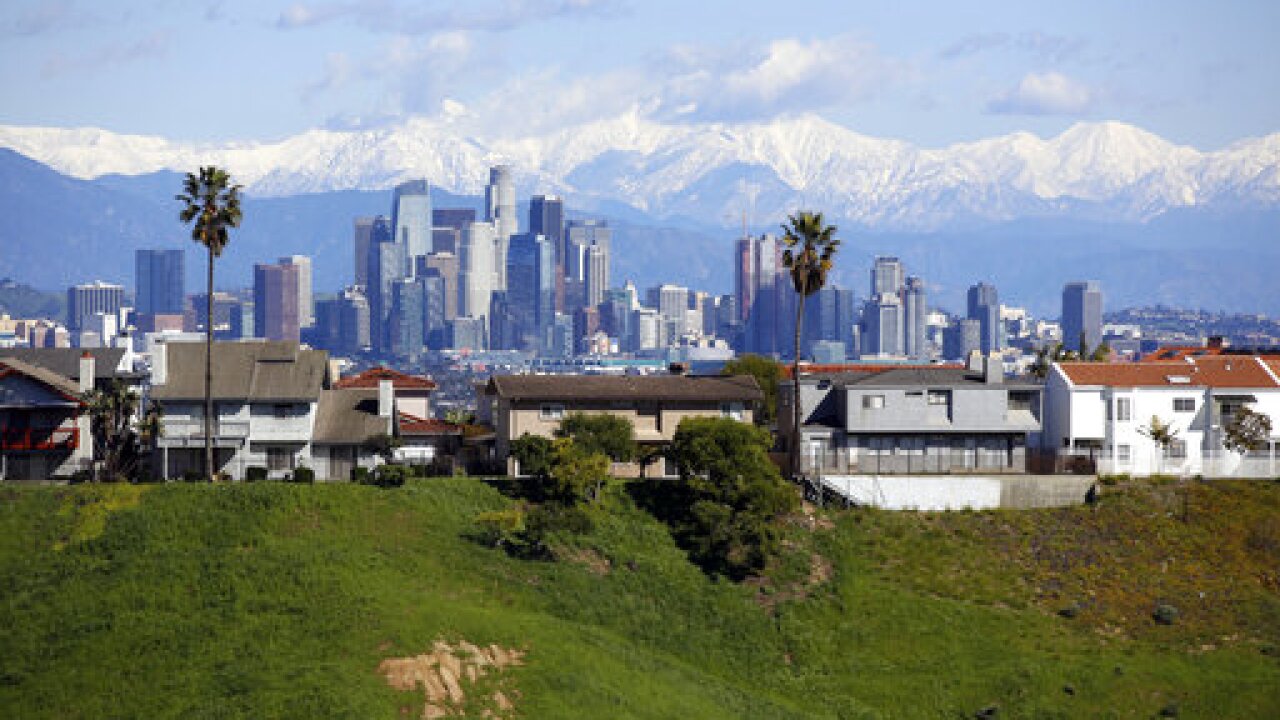 Copyright 2019 The Associated Press. All rights reserved.
Damian Dovarganes/AP
FILE - This Wednesday, Feb. 6, 2019 file photo shows California's mountains glistening with snow behind the Los Angeles skyline and homes above a normally-brown hillside. In just a matter of weeks, a very wet winter has greatly reduced drought conditions in California as a series of storms coated mountains with heavy blankets of snow and unleashed drenching rains. The U.S. Drought Monitor reports Thursday, Feb. 7, 2019 that about a third of the state has no significant dryness and only about 10 percent of the state falls into categories of drought. (AP Photo/Damian Doverganes, File)

After threatening to shut off city utilities to homes in Los Angeles violating coronavirus pandemic public health orders, the mayor has taken action twice so far. Both houses reportedly continued to hold large gatherings or parties despite rules limiting group sizes to limit the spread of the coronavirus.

On Tuesday, Mayor Eric Garcetti authorized city employees to shut off service to a home after its owner and residents held multiple large parties. The home is in the Cahuenga Pass area, near Hollywood Hills.

Los Angeles police responded to the home on August 24 after reports of a large gathering, according to the LA Times, and officers posted warnings on the property. The house hosted another large gathering on Sunday. The mayor then authorized services shut off.

On August 5, Mayor Garcetti said he would authorize crews to shut off city water and power to homes that violated city rules limiting gatherings during the coronavirus pandemic.

The first home to have their utility service disconnected was on August 19 in the Hollywood Hills area. In a tweet, the mayor said the action was taken “to stop the large parties held there in flagrant violation of our public health orders.”

The rental home was reportedly being used by Tik Tok stars Bryce Hall and Blake Gray, who are now facing charges. When he announced the misdemeanor charges, City Attorney Mike Feuer said he is not aware of any COVID-19 cases at the time that have been linked to their parties.

Police have left warning notices at another home after a large party this week, according to KTLA.

Garcetti and city officials are warning people to be safe and stay distant over Labor Day weekend.

“Gatherings — parties, cook-outs and the other activities we usually do with non-household members on holidays — can easily lead to increases in transmission, hospitalizations and deaths,” L.A. County Public Health Director Barbara Ferrer said in a statement.