"I Got a Monster" to be released next week 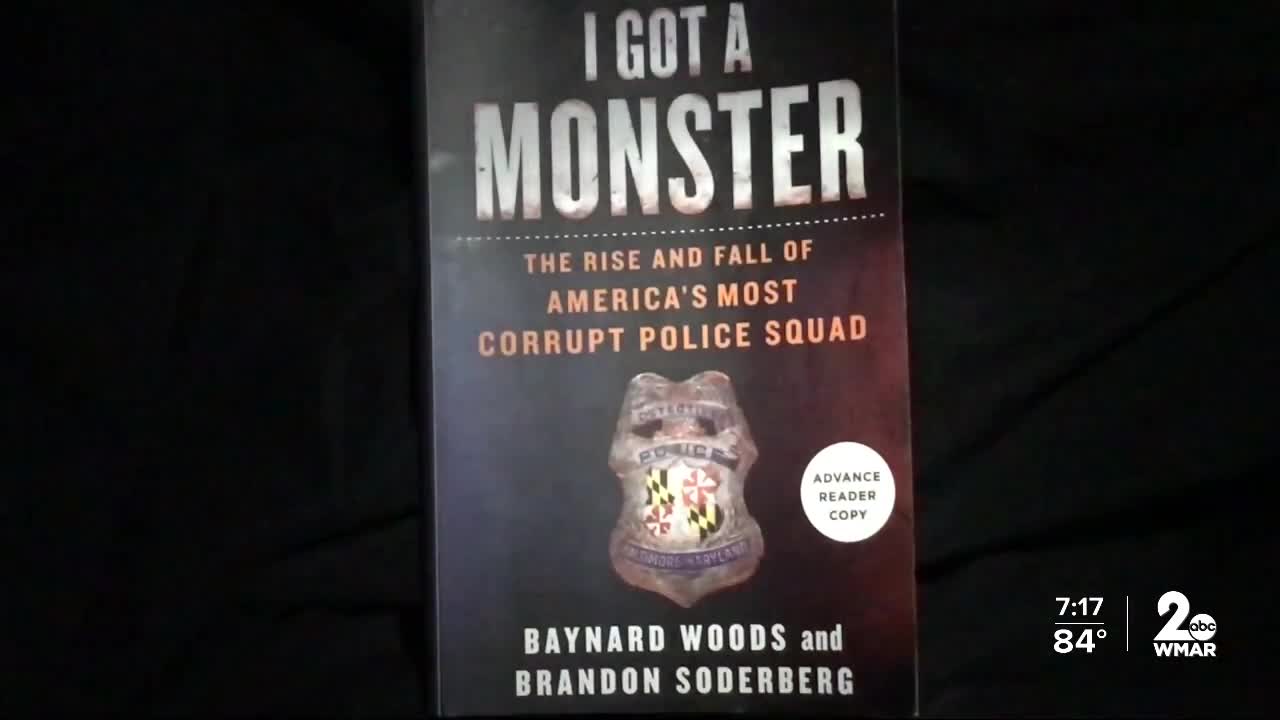 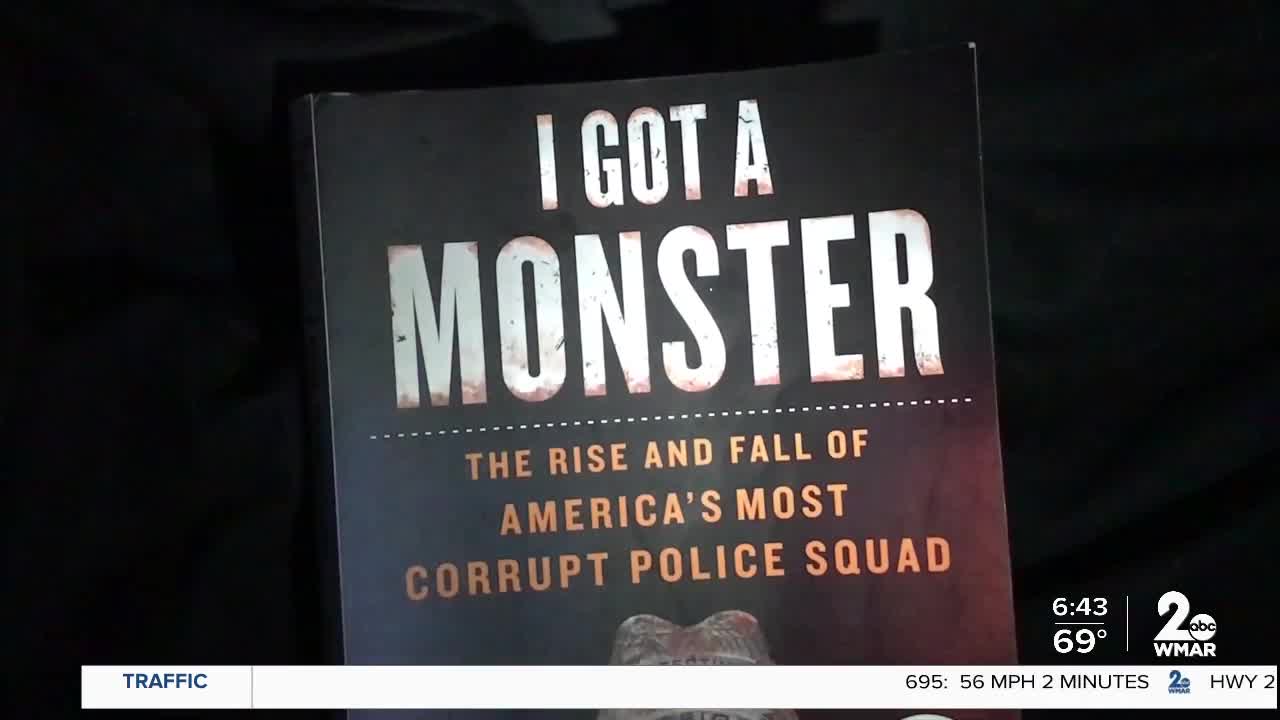 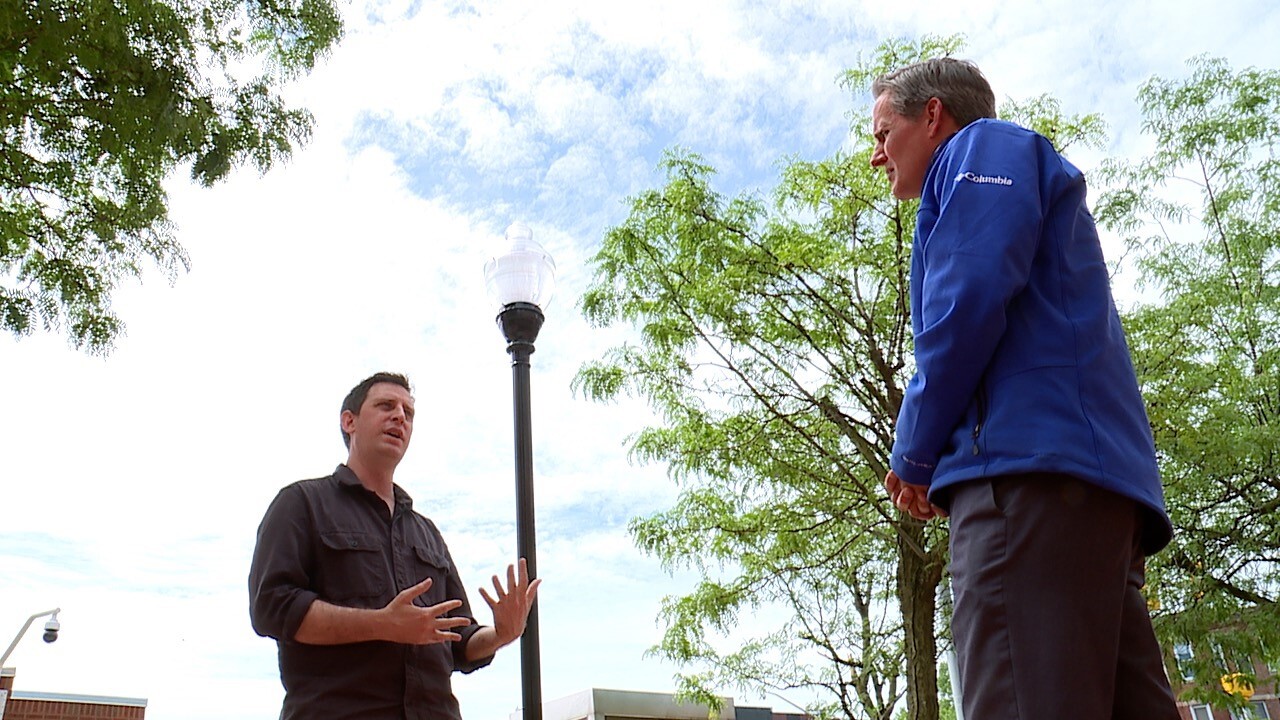 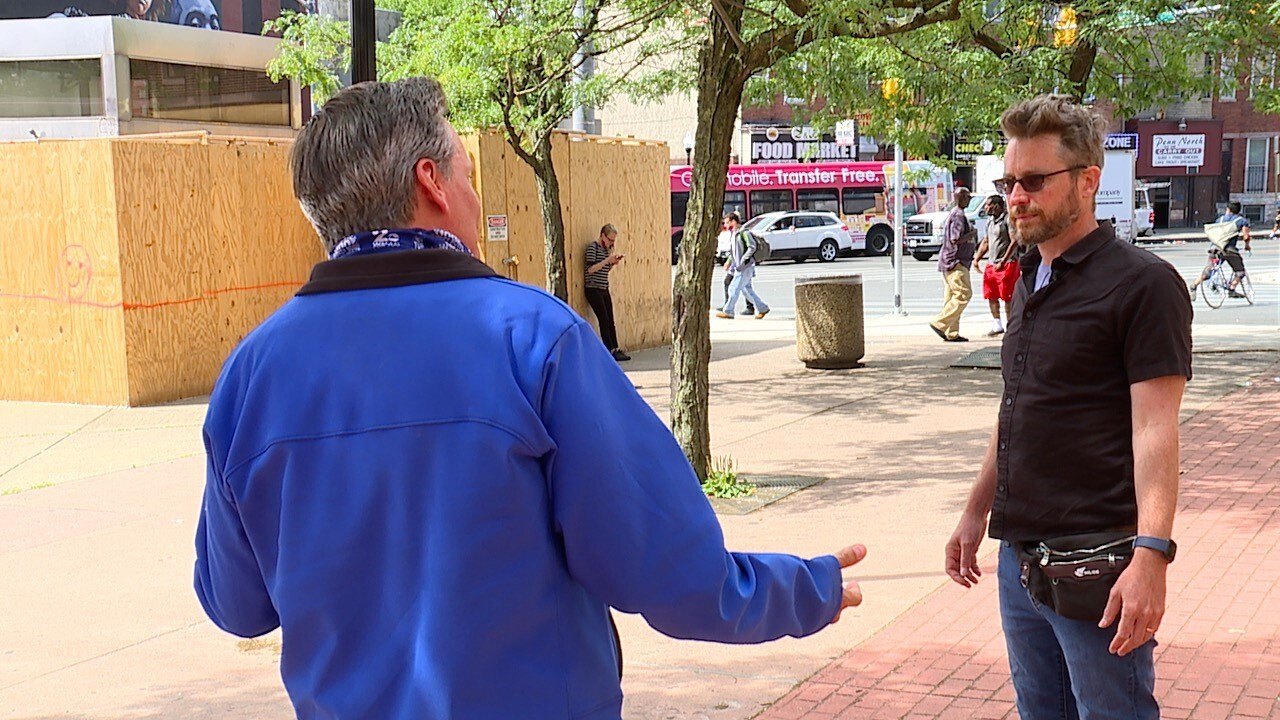 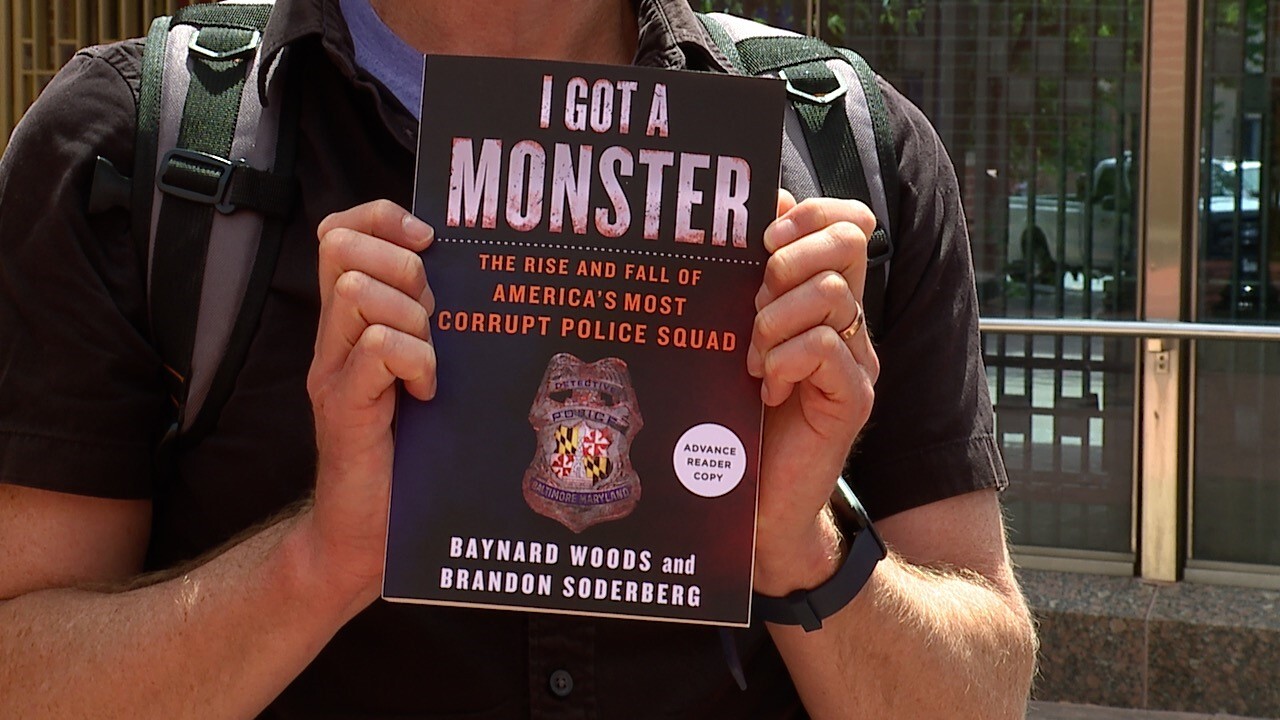 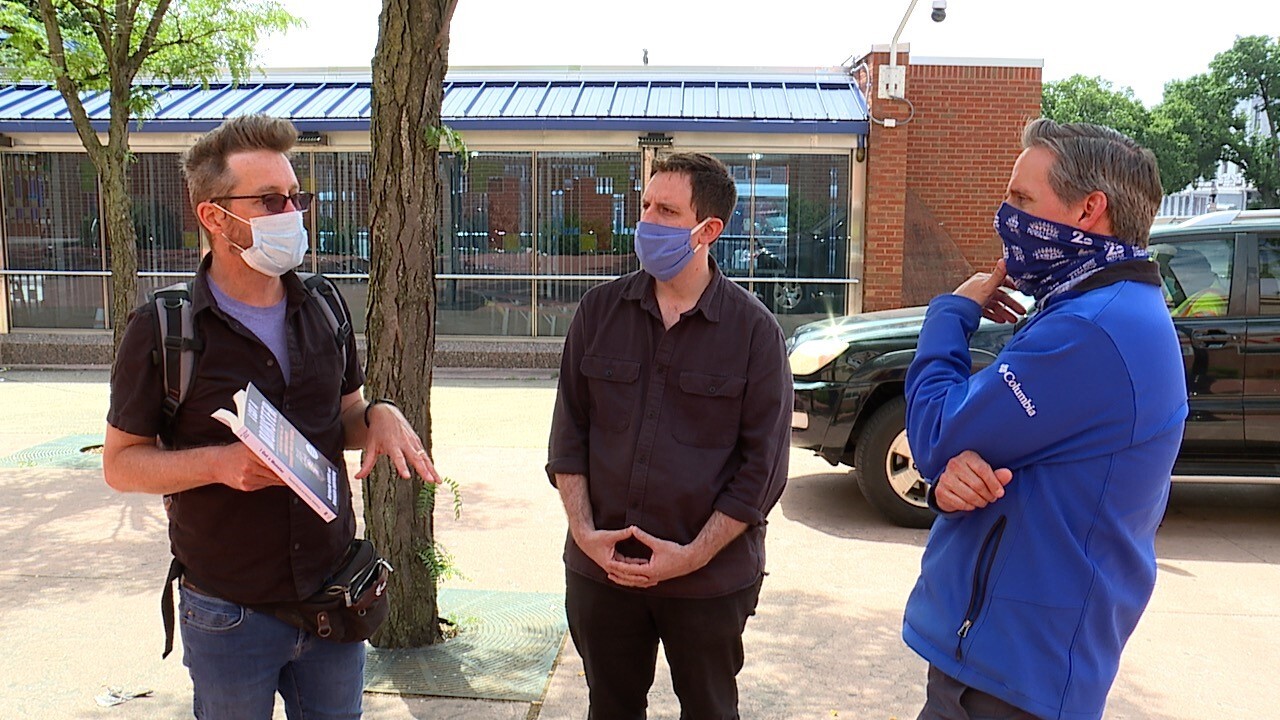 BALTIMORE — The rise and fall of the Baltimore City Police Department's "Gun Trace Task Force" is almost too unbelievable to be true.

The now-former police officers are all in federal prison, when just a few years ago they were winning commendations from the police department's leaders.

They started talking about writing a book while they were covering the trials of the two GTTF members who did not take plea bargains.

"We were like 'Why isn't this the biggest story in America?'” Soderberg said, “Which is a typical Baltimore thing; we wonder why the craziness happening here isn't the biggest story. But what we started to move into was thinking, ‘Well part of it is, it's really big and it's really confusing and it's complicated.’”

It is a complicated and confusing story, but it’s all true. And "I Got a Monster" departs in another way from the traditional crime novel.

“The way these things normally work, you have the criminals doing one thing - cat-and-mouse game - a detective tracking them down,” Woods said. “What we did for the detective role, since the cops were the bad guys, is we had the defense attorneys play the investigator role.”

Soderberg and Woods compiled years of illegal car stops, blatant burglaries of homes, thefts of 10's of thousands of dollars in cash and drugs, and lies about working overtime, into a devastating narrative.

Members of the GTTF operated without fear of being arrested themselves, especially after the death of Freddie Gray back in 2015. Gray died after being arrested in West Baltimore. Six other city police officers were arrested, and violence across Baltimore City spiked:

“That's when these Task Force officers really took advantage of the fact that there was a lot of chaos, a lot of shootings, a lot of violence,” Soderberg said. “If they could help get those guns of the street that they could get on a desk for a news camera, then they could kind of get away with all this other stuff.”

The leader of the Gun Trace Task Force, Sergeant Wayne Jenkins, got the longest sentence – 25 years in federal prison.

The book traces his early career with the city police force, the tragedy in his personal life, and his transformation into the leader of what might be considered his own criminal gang.

“I think that when you look at Wayne Jenkins' history as a police officer, there's a lot of seizing an opportunity, taking a moment of chaos – and Baltimore is often in chaos - and taking advantage of that,” Soderberg said.

Woods and Soderberg have spent much of the past three years watching hours of videotaped court proceedings - which they had to sue the Maryland court system to get.

They read hundreds of hours of transcripts of wire-tapped phone calls, and conducted new interviews with people directly involved with the GTTF, including Wayne Jenkins' longtime friend and accomplice, bail bondsman Donald Stepp.

“We kind of tried to think of it as like, how do we tell this as a story,” Soderberg said. “And not only because that made it compelling - because there's lots of characters here, like the cocaine-dealing bail bondsman – but the whole strange-ness of your drug dealers testifying against police.”

All over the country, there's been calls for change in the way police officers do their jobs. Those calls have gotten much louder since the death of George Floyd, earlier this year in Minneapolis

In Baltimore, the city police department had a head start on reform, prompted by Gray’s death in 2015. At that time, scattered calls for change started turning into a legitimate reform movement. The first line in the book, “I Got a Monster” is “Baltimore almost had a revolution.”

But instead of getting better, Woods and Soderberg write about how the members of the Gun Trace Task Force took advantage of the chaos to push back against reform.

“In many ways, what happens in our book, from 2016 until they get indicted is that the GTTF serves as a counter-insurgency against police reform,” Woods said.

The addition of police body-worn cameras serves as an example of that.

Like other officers, members of the Gun Trace Task Force did have to start wearing them, as part of a reform of the police department.

In August of 2016, GTTF members stopped a man named Albert Brown at a gas station in Northwest Baltimore.

The body worn camera that records the stop, is not switched “on” right from the start. The video does show the officers finding drugs and a gun in the driver’s side visor of Brown’s car.

After that stop, the GTTF members arrested Brown, then drove a few blocks away and burglarized his home.

“They took every measure that went in place to reform the police department and turned it on its head,” Woods said.

More than seven months after Brown was arrested, all charges against him were dropped.

Eventually, the FBI started a racketeering or "RICO" investigation. Usually, that type of investigation is used to target organized crime.

This time the FBI built a RICO case against men who had sworn an oath, to protect and serve. Seven Gun Trace Task Force members were all arrested on the same day - March 1st, 2017.

At a news conference later that day, then-commissioner Kevin Davis said: “It's a punch in the gut for the Baltimore Police Department but it's a reality and a necessity of reform.”

More arrests would follow - but even that was not the whole story.

“You start to think of, who let this happen. Who investigated these people. Who didn't investigate these people in the department,” Soderberg said. “It keeps going. It's hard to think of it as an idea like, it's contained. It keeps growing exponentially the more you think about it. The more you look at the amount of cases they had.”

Soderberg and Woods say they believe the outrage across the country after the death of George Floyd has moved people to stop debating whether reforms are needed, and start thinking about what should happen.

“In many cases, the victims that we talked to are the George Floyds and Freddie Grays who lived,” Woods said. “The same things that people were rising up against here five years ago, they are around the country now.”

If that's true, they say the GTTF scandal should serve as a warning for other cities.

“One of the things that our book is, is a blueprint for how not to go forward in the wake of an uprising,” Woods said.

They do support major changes to policing, including the abolition of plainclothes units like the GTTF.

“We need to radically change police. It doesn’t mean the kind of reforms that we've seen which are, more paperwork, more lists of bad cops, more use of force investigations. We've kind of shown in Baltimore that didn't work,” Soderberg said.

In all, 15 people have now been charged in connection with the scandal, including those initial seven. And the investigation is still not over.

“I Got a Monster" will be available nationwide on July 21st.

A second book on the Gun Trace Task Force called "We Own This City" is being written by Baltimore Sun reporter Justin Fenton. It is expected to be released in 2021.