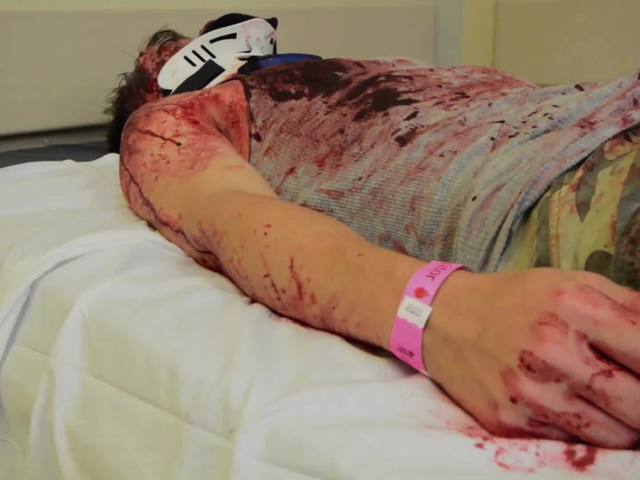 Surgeons undergo rigorous testing before moving on their residency. Their final test includes local actors from the community who portray accident victims. The doctors then have to diagnose and treat the patients. They fail if their patient dies. 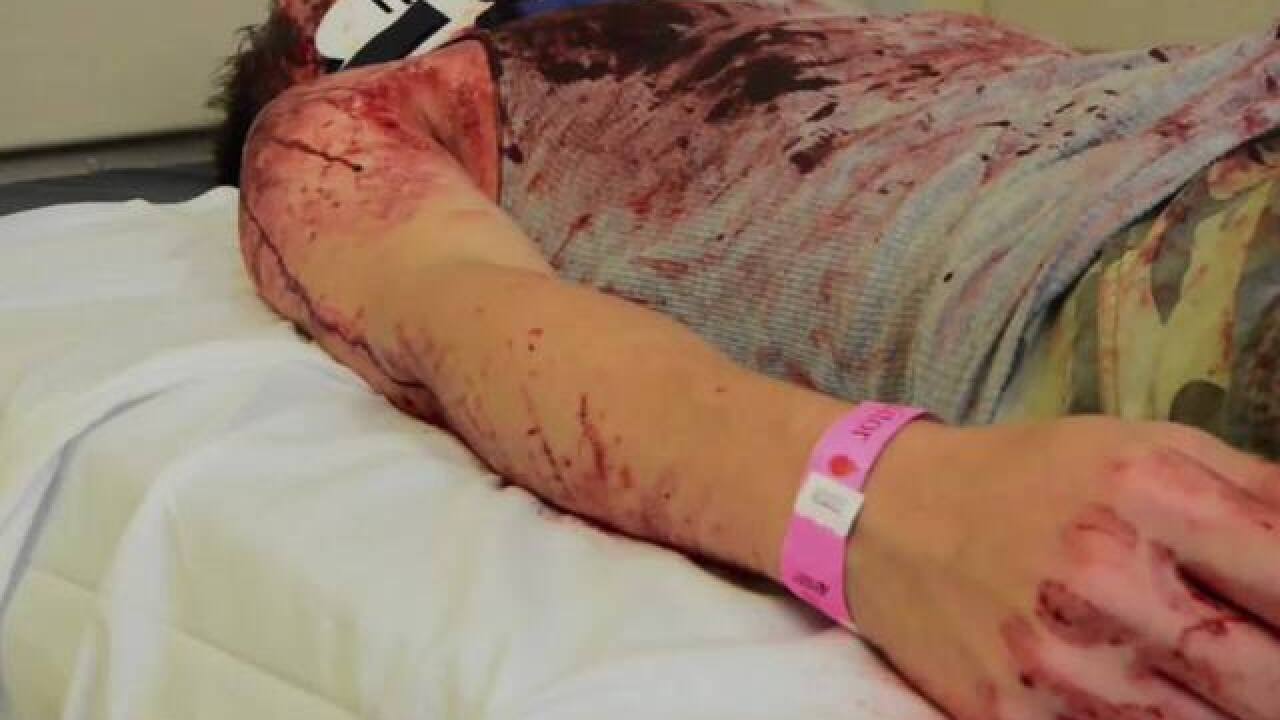 Stephanie didn't know she was slowly dying from a stab wound.

Stephanie paced around the room struggling to find her breath. She held a tissue up to her nose sopping the slow stream of blood. And she wore a purple and yellow badge tagged across the side of her face.

The diagnosis was clear.

Stephanie had been in a bar fight and lost.

Her attacker sunk a tiny blade into her back and now she was bleeding internally.

Stephanie's anguish was brought to life by Lutherville resident Marianne Wittlesberger as part of Advanced Trauma Life Support training at Baltimore's Shock Trauma Center. Wittlesberger and her husband Steve Bauer have for four years helped bring a professional realism to the two-day testing and training course that prepares young doctors for the residency phase of their careers.

Dr. Alex Blair, a 26-year-old man with thick-rimmed tortoise shell glasses and a scruffy goatee, shifted the curtain cautiously to meet his patient.

“Hello miss. My name is Dr. Blair. What is your name?” Blair asked putting his hand on the still-pacing Stephanie.

“Steph—phanie,” she said laboring through deep breaths. She began wobbling off balance.

“Can we have you take a seat right –”

Stephanie collapsed into Blair’s arms. He guided her onto the bed in the middle of the emergency room and tried to rest her on her back. She resisted, fighting to turn on her side.

He called for another doctor to hook her up to an oxygen machine. Blair jumped into his primary survey, the ABCs of care: checking her airway, assessing her breathing, circulation, disability and exposure.

For a moment, he confused her breathing with her airway. Her vital stats dipped slightly. He asked her again where it hurt.

“My back. My back,” Stephanie said, wincing in pain.

After 20 minutes, Blair pealed back her turquoise t-shirt and found the stab wound. He called for the nursing staff on duty to prepare the operating room.

Stephanie would survive. And Blair would go on to pass his test.

“Stephanie” or “Patient A,” was his practice run for a test that would determine if he would advance to his surgical residency at Johns Hopkins Hospital. Four years at Miami University of Ohio and three years at the University of Toledo came down to finding Stephanie’s stab wound.

Wittlesberger and Bauer work with Shock Trauma to bring these harrowing scenarios to life, or more actually, these simulated patients to near death through the practice of moulage. (More on moulage below.)

Wittlesberger and Bauer, also known as the performance troupe The Jokesters, are commissioned to bring a team of young actors and makeup artists to Shock Trauma to test doctors. Locally, the two are known for their annual haunted house fundraiser The Timonium Scaregrounds.

Together, the Lutherville couple worked for most major Hollywood studios as makeup and special effects artists over the 12 years they spent in Los Angeles. Now they work as teachers in Towson University’s Department of Theatre Arts and as producers on local horror movie productions. The actors they bring with them to Shock Trauma comprise students who have excelled in their class.

“If the doctors can handle our graphic violence, they can get out there and save lives,” Bauer said.

Bauer said there was no difference between preparing an actor for a day-long movie shoot and dressing up actors to prepare doctors for real life trauma victims. It's a responsibility he and his wife don't take lightly.

“If they make a mistake by being freaked out by a compound injury … they could potentially kill somebody,” Bauer said. “You gotta be able to handle that sort of thing. It’s an honor to work there and help train the doctors.”

Before The Jokesters, Shock Trauma would recruit part-time "actors," sometimes the hospital's custodial staff, to play the parts of injured patients. Organizers said the couple, who have been under contract for the last four years, have taken the program to new levels.

“The realism of having the patient respond physiologically like they might in the emergency department is what we want to happen,” said Dr. Sharon Henry, professor of trauma surgery for the University Of Maryland School Of Medicine.  “If the patient is short of breath, we want them to act like they’re short of breath."

Henry took over the Advanced Trauma Life Support program in 2003.

“There are a few things that ATLS prides itself on. One of those things is depth,” Henry said. “We teach certain things that you will need to know how to do to manage patients in their early care. … We have what we call skill stations, hands on opportunities to do those skills.”

ATLS training was developed in 1978 by orthopedic surgeon Dr. James Styner after a tragic plane crash that killed Styner’s wife.

Styner himself crashed the plane carrying his family into a line of trees, killing his wife instantly, he wrote in the Journal of Trauma Nursing.

Eventually, his family was taken to a hospital where Styner found the doctors did not know how to handle extreme medical trauma cases.

“They didn’t think of about the usual things that we took for granted as far as the early management of the patient,” Henry said.

In 1978, Styner developed the Advanced Trauma Life Support system with several colleagues. The course was adopted across the country in 1980. The Maryland Committee on Trauma implements the course at Shock Trauma, the state’s only testing center.

“When the course first started we tried to recreate the emergency setting. We used to put in a lot of distracters as well,” Henry said.

“We used to do all kinds of things to rattle the doctor, things that might happen in the emergency department like have someone run in and bother them while they were trying to assess the patient,” Henry said. “Just to sort of ruffle the feathers of the person was being tested.”

The course is updated every five years.  Organizers focus on realistic scenarios of the worst kinds of trauma, aided in large part by The Jokesters.

“The students handle it quite well for the most part. Do the students get nervous? You can see that often. There is a fair bit of realism when they get in the room,” Henry said. “Sometimes we put them in a setting that is so realistic … that they just freeze and can’t think of the steps that they went through with ease the day before.”

Walking from the lobby with The Jokesters and their team in full makeup drew stares from doctors and the occasional “somebody get those people some help!”

“You wouldn’t believe how many times I walk by a doctor who goes ‘can I get you to the ER?’” Bauer said.

Jon Loundenslager, one of The Jokesters’ former teaching assistants, was playing the part of a 19-year-old car crash victim. His scenario called for a severe head injury suffered from a bad crash at 40 m.p.h. into a tree.

But for Loundenslager, his time at Shock Trauma was also chance to give back.

"It's always fun to help out our doctors. It's just as important as any other profession if not more," he said. "I've actually been to Shock Trauma center before because I'm diabetic."

He suffered a diabetic ketoacidosis attack.

"I got sick one day and I had trouble breathing. It was a horrible experience," Loudenslager said. "I went in and experienced all of this and the doctors helped me."

Scenarios range from the obvious gunshot and burn victims to the more complex car crashes that present "distracting injuries" like compound fractures.

“You can bleed out from a femur, but what will kill you first is that collapsed lung,” Bauer said. "Most of these are distracting injuries.”

Sam Lukowski, a Baltimore actor, presented doctors in June with the most disturbing injury of the testing phase (see video).  Lukowski's character wasn't wearing a helmet when he crashed his motorcycle into the back of a semi-truck. As Lukowski described it, "this guy is screwed."

Lukowski used a sawed dog bone to craft a broken femur protruding from his left leg. He doused himself in fake blood, dabbing a few more droplets to his head for added effect.

In June, his character's roll only called for a response to painful stimuli. Proctoring surgeon Dr. Dylan Stewart, founder of The Healing Hands Foundation, paid him the ultimate compliment.

"That's about as real as it gets," Stewart said.