Carrie Boswell committed suicide on July 11, 2004. She had told her father Dave over dinner once that she believed organ donation was the right thing to do. Her lungs were donated to Debbie Johnson who is alive today and has seen the births of two gr

Debbie Thompson came down to Baltimore from her home just outside of Harrisburg, Pa. in search of a lifeline. Her doctor told her she had about two months to live.

Thompson drove home that night with her husband, Scott, in silence.

Thompson cried herself to sleep at about 1:30 in the morning that night. Then, the call came in at about 3 a.m. Doctors had found her a set of lungs.

The Thompsons quickly sped down I-83 toward the hospital in Baltimore. A Maryland State Police trooper eventually pulled them over because of their speed and that Thompson had to pull over and throw up because of nevers.

"He thought she thought was drunk," Boswell said. "When he found out what was going on he called his dispatcher and said 'put me on vacation.'"

The state trooper escorted the Thompsons "on an 85 mph run right to the hospital in downtown Baltimore," Boswell said.

"So many neat people in the world when you have a problem," Boswell said. "There really are."

"I came home from work one afternoon and found her hanging from the ceiling fan in her bedroom," Boswell said.

The "her" Boswell was referring to was his daughter, Carrie Boswell, who killed herself over a man she was dating.

Boswell said the image of his lifeless daughter was burned into his mind's eye and he'll see it "until they nail the lid shut [to his coffin]."

He acted as fast as he could.

"I put my emotions and my horror in my back pocket and I pulled her down and did CPR," Boswell said. "I couldn't save her life. But I did save her organs."

When the doctor came into the waiting room and told the Boswells Carrie was brain dead, Boswell said he was taken to the "deepest, darkest corner of hell you can imagine."

"We were in a hospital. There's enough light in there to get a tan. Darkest corner of hell," Boswell continued. "Then somebody from the organization came in and send the five words that changed my life: 'Have you considered organ donation?'"

"I said to her, 'do you mean to tell that we say yes, another set of parents won't have to be here?'" said Boswell, who told the medical staff to I said take every organ they could.

At least three lives were saved from Carrie's death. 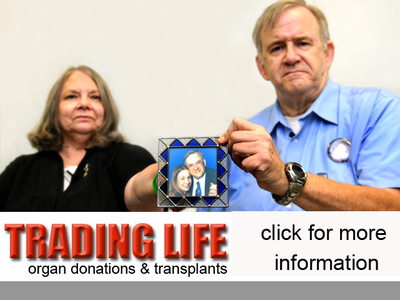 The Boswells have kept up with Thompson and her family, which has become an extension of their own family.

"Debbie, because of Carrie, has seen both of her kids graduate high school, both of them graduate college, both of them get married, and this past April, she saw the birth of her second granddaughter -- because of Carrie," Boswell said. "That's what's important. People live on. You go the hospital, you become a donor -- unfortunately -- but because you are, she'll go home and have dinner that night with her family. How important is that sort of thing? To me, it's everything."

Carrie was "a challenge" growing up, Boswell said.

One time a police officer had to respond to the Boswell's home because she was in a hysterical state. She was defiant and held contempt for authority figures. But at her core, she was a giver.

"She was inclined to do anything for anybody if they needed it," Boswell said.

Carrie was the girl who took up a collection from friends for gifts. She was always eager to pick out the Christmas tree. She was the first one to start "talking turkey" around Thanksgiving, Boswell said. The Boswells only a few years ago began decorating a Christmas tree again.

In her death, she gave the ultimate gift.

"It allows me to see her as the hero she is, instead of the foolish teenager who threw away her life," Boswell said. "And that's an important transition. Those first couple of months were awful. We're sitting around the house and the boss calls: 'Are you coming into work today?'"

About once a month, Thompson sends letters to the Boswells. They say the Thompsons have become their extended family.

"It gets easier over time," Anita Boswell, Carrie's mother, said. "You still get emotional. You still think about her over time. But it does get easier. At least once a month we get letters and pictures from Debbie; how her grandchildren are doing, how her children are doing, what she's been up to, what restaurant she went to, what movie she saw. And that really helps, for her to stay in contact with us. We really appreciate that."