For most Baltimore residents, seeing a cockroach is the kind of thing that ruins your day. The thought of the creepy pests is off putting enough, let alone the idea of actually touching one.

But for brave souls like Brixton Henfield, petting a pair of Madagascar hissing cockroaches was just one more exciting and unique experience as part of her special day getting a behind the scenes look at some of the animals housed at the National Aquarium in the Inner Harbor.

Despite her young age, Henfield knows a little about what is harmless and what is not. Diagnosed in May of 2017, Henfield has been battling Rhabdomyosarcoma, a rare malignant tumor involving muscle tissue. After the cancer metastasized she began chemotherapy treatment at the University of Maryland Children’s Hospital, as well as proton therapy at the Maryland Proton Treatment Center.

Proton therapy, or proton radiation, is a method of radiation treatment that more precisely attacks a tumor while causing less damage to surrounding healthy tissue, said Katarina Steacy, a nurse practitioner at the Maryland Proton Treatment Center, located in the University of Maryland BioPark in Baltimore. The technology has been around for decades, and it is particularly useful in treating tumors in young patients.

“For pediatric patients it’s so important because of all of the developing tissue structures,” Steacy said. “So you an really minimize the exposure to radiation at such a young age, hoping that they live a long, healthy life.”

Once proton therapy is chosen as a course of action, a patient undergoes treatment every day for a set number of weeks, depending on the dosage required, Steacy said. Because of it’s precise focus, it can at times be used even after other radiation treatments have been tried.

On the last day of her treatment, Henfield participated in the Proton Center’s “Magic Castle” program, where one of the center’s radiation therapists dresses up as a princess and grants the patient’s wish. Henfield’s was to meet some of the animals she adores.

“The animals are cute, and I love them so much,” she said before trainers Kristen Frizzell and Meredith Good, and Manager of Animal Programs Liz Evans began Henfield’s interactive animal experience.

Prior to meeting the cockroaches, Henfield got a behind the scenes look at the aquarium’s dolphins. After the insects, she got to try her hand as a practicing trainer with a charismatic yellow-footed tortoise named “Joey.”

The eight-year-old tortoise was trained to follow red bulbs on sticks, being rewarded with food as he touched his targets. After getting the hang of it from Good and Frizzell, Henfield wielded her own baton and led Joey around a conference room table, granting him lettuce, zucchini, and even a raspberry for his efforts.

Following her table session with terrestrial animals, Henfield got a guided tour of the entire aquarium, starting in the buildings underwater viewing area, where she got to see her favorite fish, the blue surgeonfish, better known to most fans Henfield’s age as the “Dory fish,” from the beloved “Finding Nemo” franchise.

“To see her smile and have so much fun with them, especially with everything that she’s been through and still going through,” Johston-Keisling said. “We’ve been waiting for this day for a long time. … It’s good to take your mind off of doctor visits, hospital stays, hopefully some of those are behind us.”

Click the picture below to see images from Henfield’s Magic Castle experience at the National Aquarium: 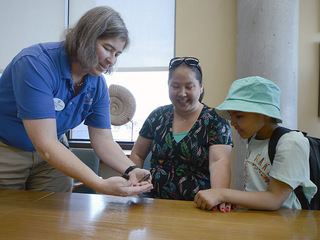