Nathan Sebo speaks about his life prior to his transplant

Nathan Sebo is actually excited about the start of the upcoming school year.

The 9-year-old from Middle River cannot wait to be with his friends, meet his new teachers and just enjoy being a kid. That’s because Nathan’s summer did not involve swimming, playing baseball or going to the beach: he got a new kidney and liver.

Nathan’s original liver was missing the enzyme that allowed him to metabolize protein. His condition was known after genetic testing at birth and was managed well until about a year ago. In recent months, Nathan had to spend weeks at the hospital and needed to receive 5,000 units of fluid a day through a tube because his kidneys had to work harder because of the liver issues.

“We got to the point where we knew Nathan would need a new liver, but his doctors felt the kidneys needed to be replaced at the same time even though he was not in kidney failure yet,” said Shawn Sebo, Nathan’s father, and a firefighter in Baltimore County.

So, for close to a year, the Sebos waited anxiously for a call letting them know that a life-saving surgery could be right-around the corner. During this time, Nathan was home-schooled in between hospitalizations to minimize the chances of him being exposed to illnesses from other students.

RELATED: Wait times on the rise for those in need of organs

Christine Sebo, Nathan’s mother, said this led to many anxious moments, as the family had to be prepared for anything. It led to bags being backed, plans in place to care for their daughter and nerve-wracking months of the waiting game.

“Every time the phone rang and we didn’t recognize the numbe, we were on eggshells wondering if that was the call,” she said.

The Sebos were also aware of many factors working against Nathan, including that because of him needing multiple organs, a living donor was not an option. Also, the donor had to be a small adult or a child because of Nathan’s small stature. In addition, Nathan needed a donor that could offer both organs at the same time.

RELATED:Vital time: A look at the role time plays in organ transplants

“The hardest part was knowing there was something out there that can help Nathan and the solution was out of our hands,” Shawn Sebo said. “Nathan just wants a sense of normalcy in his life and that was impossible until we got the surgery.”

That call finally came at 3:57 a.m. on June 8. Doctors at Children’s Hospital of Pittsburgh told the Sebos there was a potential donor and to be ready to leave on a moment’s notice. About three hours later, they got confirmation that the liver was accepted, followed by another call five hours later that the kidney was good too.

“We were trying to make the day as normal as possible for Nathan, because we didn’t want to get his hopes up in case something went wrong,” Christine Sebo said. “Thankfully it was finally all a go.”

The Sebos arrived in Pittsburgh late that night, and Nathan was quickly prepped for surgery. The prep work was taking place as another team worked hundreds of miles away to secure the organs from a child donor.

Nathan’s surgery took about eight hours. Overall, his doctors felt the procedure was a success, but admit there is a long road to recovery. 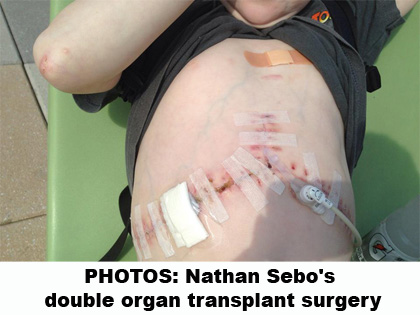 “Nathan was definitely more of a high-risk patient than others we had because of the metabolic issue,” said Dr. Kyle Soltys, assistant professor of surgery at Children’s Hospital of Pittsburgh. “But, we worked with our metabolic team to ensure the best outcome possible. Our hope is that his new organs will help produce the missing enzyme and allow Nathan to live as normal a life as possible.”

Soltys said cases like Nathan stress the importance of organ donations, especially when it comes to children.

“We have a lot fewer organs for children than we had 15 to 20 years ago,” he said. “Some of that is that medical technology has improved and there are fewer children dying. For the most part, parents dealing with the loss of a child are interested in donating their organs because it allows their child to live on through others.”

While Nathan is still recovering, his prognosis is good. He is still receiving treatment in Pittsburgh, but it is now on an outpatient program as he and his family are staying at a nearby Ronald McDonald House. His doctors are optimistic that Nathan will be able to return home in time to start school at Martin Boulevard Elementary.

The Sebos said they could not have reached this point without the help of friends, family and organizations like the Ronald McDonald House. They also set up a Facebook page to provide everyone interested a way to keep up with Nathan’s progress.

“It’s all about paying it forward,” Shawn Sebo said. “From those in the fire department covering my shifts, to friends offering to help with meals and child care, the outpouring of support has been impressive. It makes caring for Nathan much easier as that is where we are needed right now.”

Permastitch, a Middle River-based business is selling specially-made shirts to help support the Sebos and defray medical costs. The shirts are $7 each and those interested can call 410-686-6600 for more details.

We invite you to learn more about organ donations and the impact they have on every person involved.