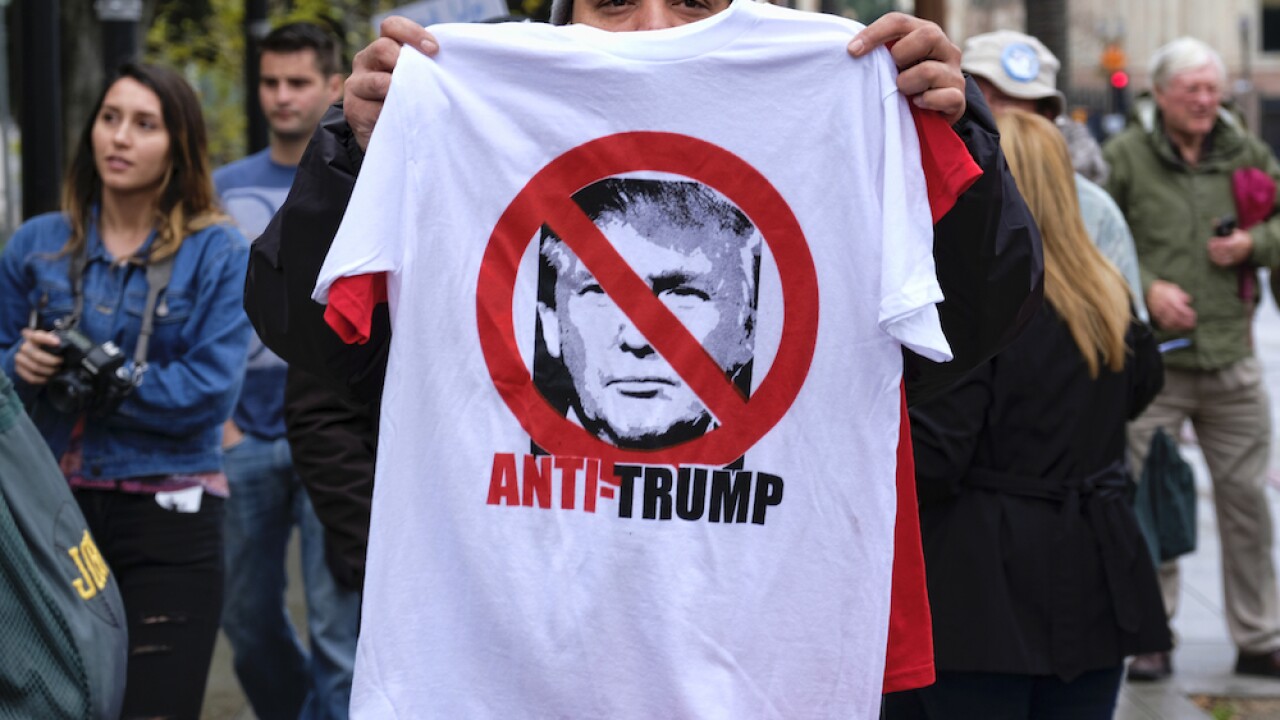 Copyright 2017 The Associated Press. All rights reserved.
Richard Vogel/AP
A street vendor sells an anti-President Trump tee-shirt during a protest on the outside of Los Angeles City Hall on Monday, Feb. 20, 2017. Several hundred people gathered in front of Los Angeles City Hall this morning to express their opposition to President Donald Trump and take part in a ''Not My President's Day'' rally. (AP Photo/Richard Vogel)

EXETER, N.H. — A voter bared her arms, and more, after she was told she couldn't wear an anti-Trump shirt at a polling place and responded by whipping it off and doing her civic duty topless.

In New Hampshire, voters are not permitted to wear any "campaign material" inside a polling station. Moderator Paul Scafidi told the woman that she could not wear the shirt while voting, according to Sea Coast Online.

Scafidi said the woman asked why another woman in the polling station was allowed to wear a shirt with an American flag while voting. Scafidi said he determined that an American flag shirt did not constitute as electioneering — a judgment call that he, as the moderator, is required to make.

Scafidi then told Sea Coast Online that the woman asked if she should take her shirt off, even though she was wearing nothing underneath.

"I said, I'd rather she not," Scafidi said, according to Sea Coast Online. "But she took it off so fast, no one had time to react. So the whole place just went, 'woah,' and she walked away, and I let her vote. She could've just gone into the hallway and turned it inside-out."

The woman could have faced public indecency charges, but Scafidi said he chose not to involve the police because he "didn't want to escalate the situation further." The woman put her shirt back on before she stepped out of the voting booth.

According to InStyle, electioneering laws vary from state to state, but most prevent voters from wearing clothing that directly advocates for (or against) a particular candidate, party or issue while voting. The issue gets trickier when considering articles of clothing with more generic political slogans, like "Make America Great Again" or "Resist." Ultimately, it may come down to a poll worker's or moderator's discretion.