Shooter and one victim had relationship in past

A gunman is dead and two other students are injured following a Maryland high school shooting Tuesday morning.

During a press conference, the St. Mary's County Sheriff's Office said that Rollins walked into Great Mills High School with a gun. Around 7:55 a.m., 16-year-old Jaelynn Willey, and a 14-year-old boy were shot in Hallway F.

Deputies say the School Resource Officer, Deputy Blaine Gaskill, was alerted, pursued Rollins, and fired a shot in his direction. Almost immediately the student shot back, but Deputy Gaskill was not hit. It is still under investigation whether the officer's shot was what killed the gunman.

The SRO, who Governor Hogan says was a former SWAT member, is being hailed a hero.

Click the picture below to see more photos from the scene: 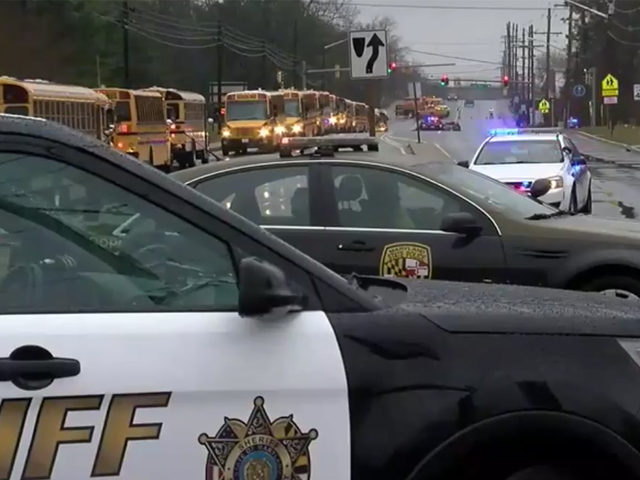 Deputies say Rollins and Willey had a relationship in the past. She is one of nine siblings and a member of the school's swim team.

Willey is in the ICU with life-threatening injuries and the 14-year-old boy is reportedly stable.

The Sheriff said that there were no pre-incident signs that show Rollins would have been a part of a school shooting, but they are searching his home for evidence.

Deputies are still investigating the motive of the shooting.

#GreatMillsHighSchool most likely closed tomorrow after shooting. Maybe rest of the week. Authorities still working to reunite students with parents at nearby HS. #greatmillsshooting

Special Agents with the ATF Baltimore as well as the FBI Baltimore are also at the high school.  The FBI tweeted that if anyone has information regarding the shooting to call 1-800-CALL-FBI (1-800-225-5324).

A fundraising page has been set up for 16-year-old Jaelynn Willey, or click here to help the 14-year-old boy.