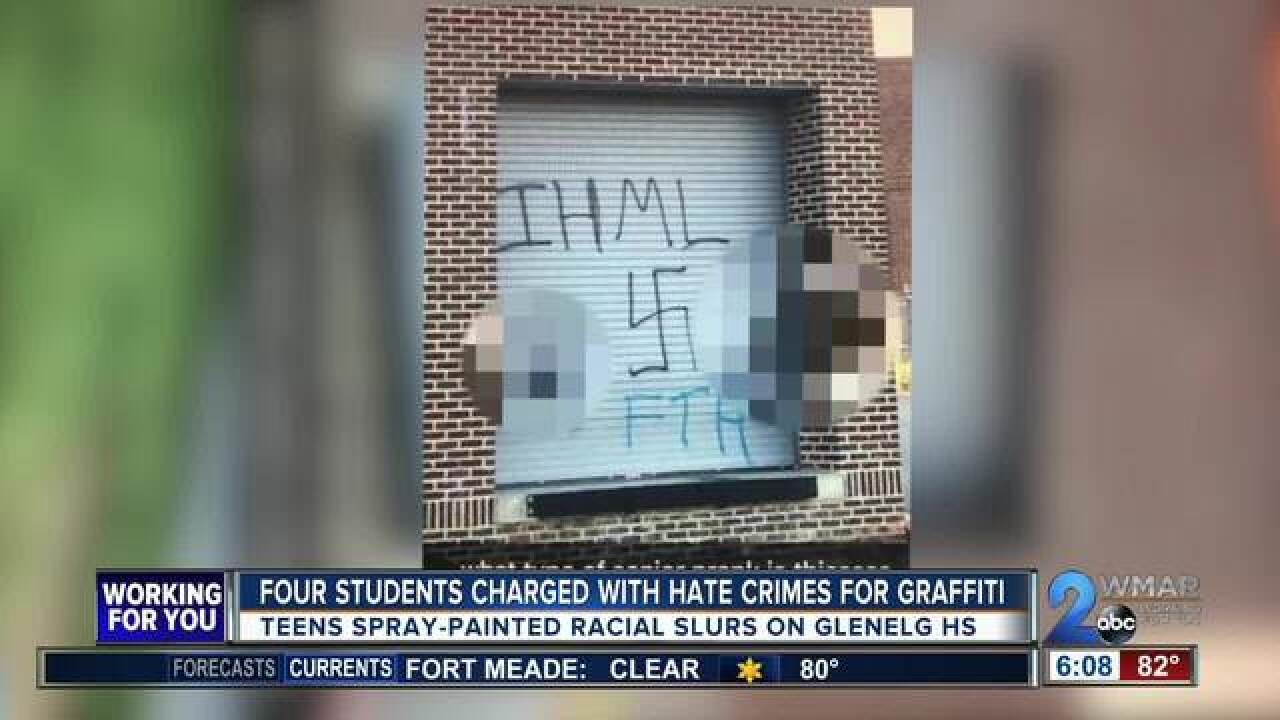 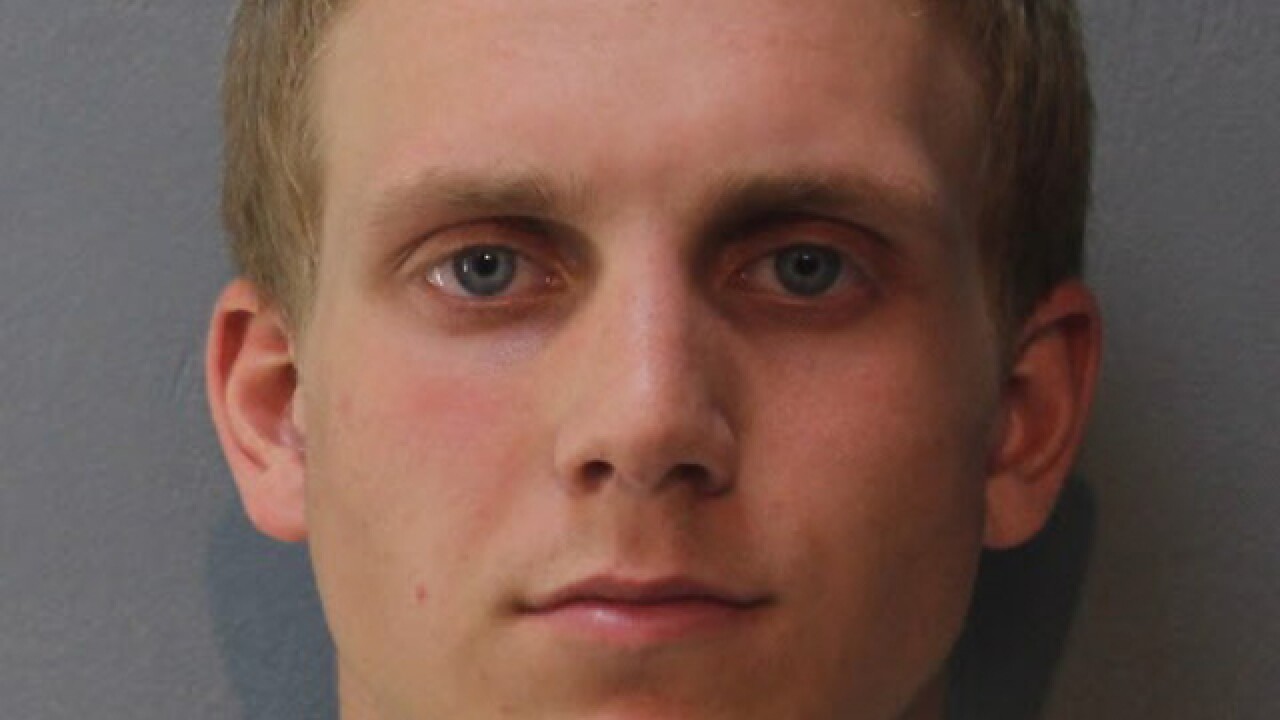 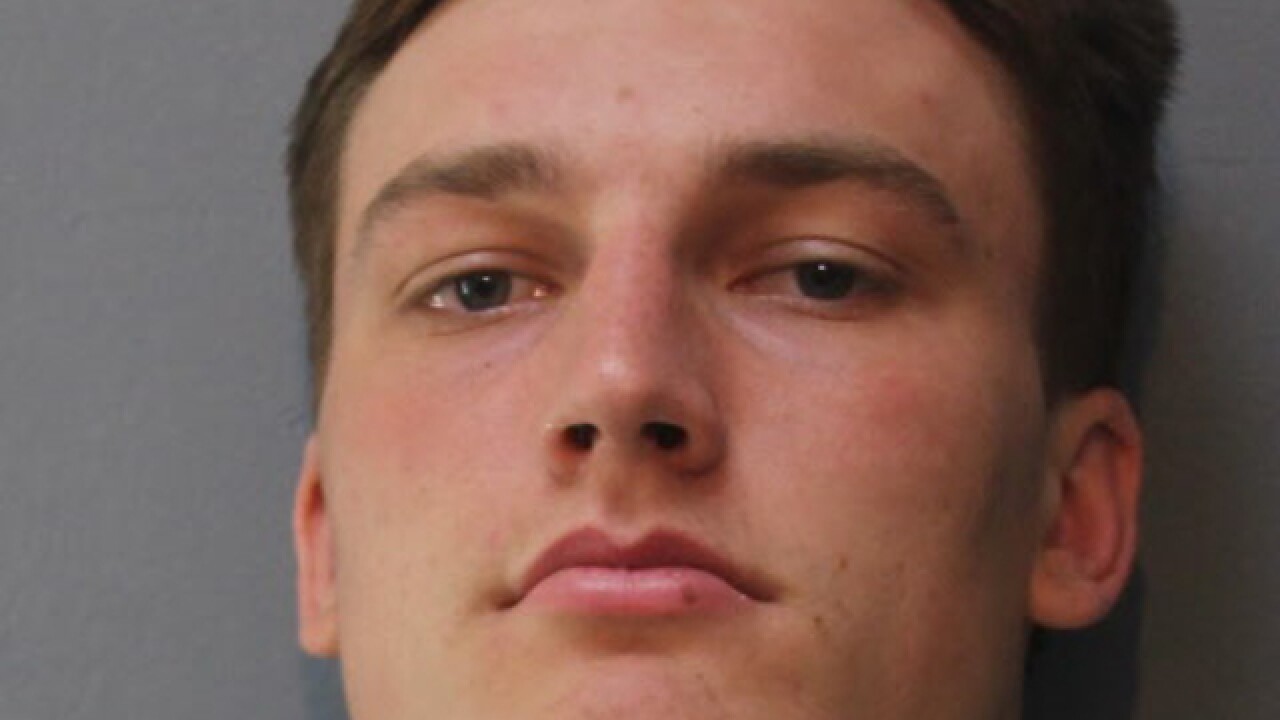 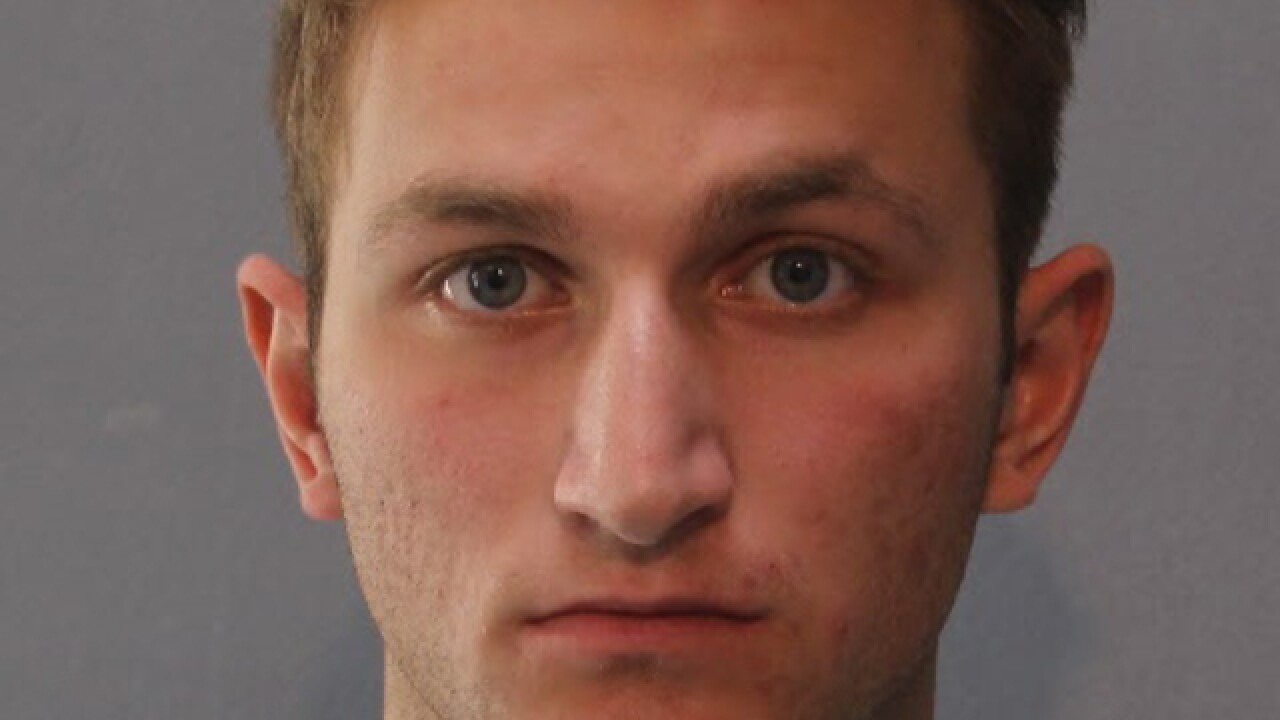 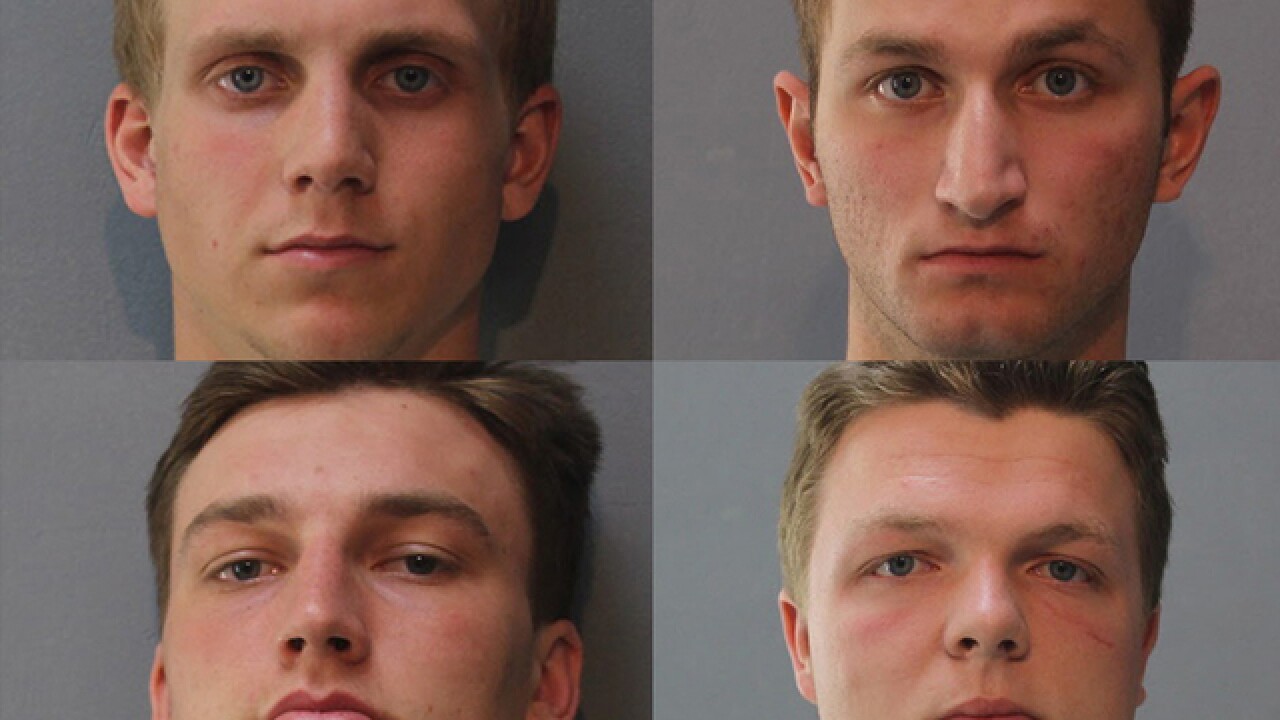 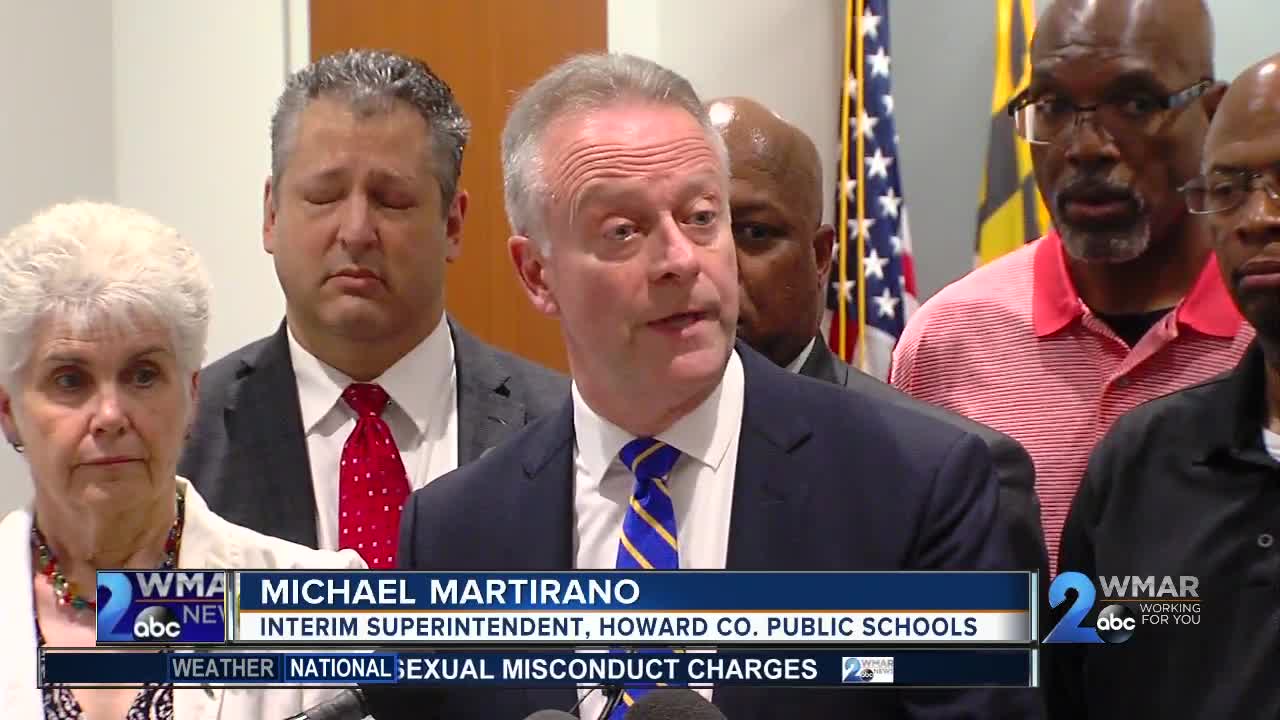 Four students have been charged with hate crimes after graffiti was discovered on Glenelg High School Thursday morning.

The teens are accused of spray-painting racial, anti-Semitic, and anti-LGBTQ slurs on the school. One of the slurs was targeted at the school principal.

Seth Taylor, 18, Tyler Curtiss, 18, and Joshua Shaffer, 18, were taken into custody at the school. Matthew Lipp, 18, was picked up by police at his home.

Glenelg staff and the School Resource Officer identified the teens from surveillance video.

In his 30+ years as an educator, Martirano said he's never seen this amount of graffiti at one school.

Martirano called the slur aimed at the principal of the school an attack.

"We have an African-American principal at the school who is a target of this, which in my estimation rises to the level of a hate crim. We will not tolerate this in Howard County or in the Howard County school system," Martirano said.

He added that if this was a prank, it is an "interesting definition of a prank" and that it is beyond belief that someone would think it's one when it falls into the category of hate.

There have been several other incidents at Howard County Public Schools. Last November, police investigated an Oakland Mills High student's social media post seen as racist in nature. Shortly after the presidential election, there were two other offensive social media posts by students and racially insensitive graffiti at another school.

"I'm asking young people to think. Think before you post something, think before you engage in an activity that can have life transforming ramifications for you. I'm asking our parents, once again, get involved with your child's social media," said Martirano.

In response to the initial incidents, Howard County Executive Allan Kittleman launched the #OneHoward initiative to promote diversity and inclusion.

“I'm frustrated when I think of all the people that have sacrificed in our community to make our community what it is today. We still have work to do. That is frustrating folks,” said Kittleman, whose kids went to Glenelg. His daughter is also a teacher at the school.

Below are statements from the various organizations in response to the incident:

The Howard County Branch of the NAACP supports the families and community of Glenelg High School during this period. These acts of unlawful vandalism during a graduation season were a mean-spirited bid for attention. We encourage the community and the many families at Glenelg to respond with love and unity.

All postings of racist epithets from individuals show a lack of love. To be promote racist statements, while provocative, reveal these culprits are in search of attention. The other affect is that it can help to fracture and divide our community. We should not let division happen.

Our Branch supports a full investigation with the goal of apprehending the individual(s) involved so they can repay the damage done to public property. They should be held accountable for these acts of racist vandalism.

We should all show that racial division has no home in Howard County and we stand together with the HCPSS school administration to continue to build the community. These acts are counter to our school district’s values of family and community understanding. We cannot tolerate racial division out of a lack of love in any form.

“An attack against any member of the Howard County community – but especially against any racial or religious minority member – is abhorrent; we must join together to condemn these sorts of hate incidents whenever and wherever they occur,” said Interim Executive Director Ralph Grunewald.

"As Jews, we are especially sensitive to persecution, intimidation, and being singled-out. The Jewish community stands united with the Glenelg High School community and with our elected officials and faith leaders in support of their rapid and unequivocal response to an unconscionable act of hatred," said Rabbi Susan Grossman.