Police: Suspect was there to kill as many as he could at Capital Gazette

Copyright Getty Images
Alex Wroblewski
<p>Police respond to a shooting on June 28, 2018 in Annapolis, Maryland. - At least five people were killed Thursday when a gunman opened fire inside the offices of the Capital Gazette, a newspaper published in Annapolis, a historic city an hour east of Washington. A reporter for the daily, Phil Davis, tweeted that a 'gunman shot through the glass door to the office and opened fire on multiple employees.''There is nothing more terrifying than hearing multiple people get shot while you're under your desk and then hear the gunman reload,' Davis said. (Photo by Alex Wroblewski/Getty Images)</p>

Prosecutors announced the Capital Gazette shooter had planned his attack and barricaded the back doors shut, so when people tried to escape, he shot them.

Police announced the Capital Gazette employees who were injured are Rachel Pacella and Janel Cooley.

“Most of the people who work at the Capital Gazette work with us daily, weekly,” explained Anne Arundel County Police Chief Timothy Altomare.

During a press conference Friday afternoon, Altomare thanked all of the help they got from their fellow law enforcement officers, saying that over 300 officers were there to help during the shooting and in the investigation that followed.

Altomare explained how the shooter had a past with the newspaper, including past harassment charges, but he would not mention his name.

"It doesn't serve us to talk about him one more second," Altomare said.

Altomare continued to say that police completed a search warrant on the shooter's house. There they found evidence showing the origination of planning of the event. He would not explain what that exactly meant or any additional details, but he did say that he was there to kill as many people as he could.

Also released on Friday was that the shooter bought his pump-action shotgun legally one year ago.

The shooter had a bail hearing on Friday and is being charged with five counts of first-degree murder. The State's Attorney, Wes Adams, said he will be held without bail.

Adams continued to say the shooter had barricaded the back door and when one person tried to escape through it, they were shot.

“In assessing the evidence in this case, we brought to the judge's attention the evidence that suggested a coordinated attack, the barricading of a back door, and the use of a tactical approach in hunting down and shooting the innocent victims in this case,’ explained Adams. “There were two entrance to the offices in which this attack occurred. The rear door was barricaded. Mr. Ramos then entered the front door and worked his way through the office, shooting victims as he walked through the office.”

Adams was not able to explain much more, saying that he could not discuss the pending nature of the investigation or the specific pieces of evidence.

The next steps in the case will be either a preliminary hearing or bring him out to a grand jury in the next 30 days. 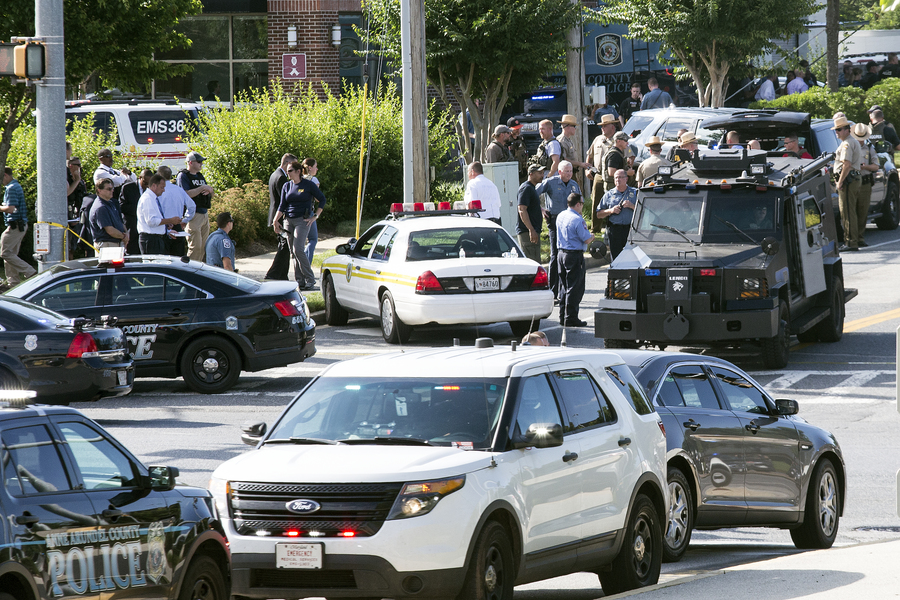