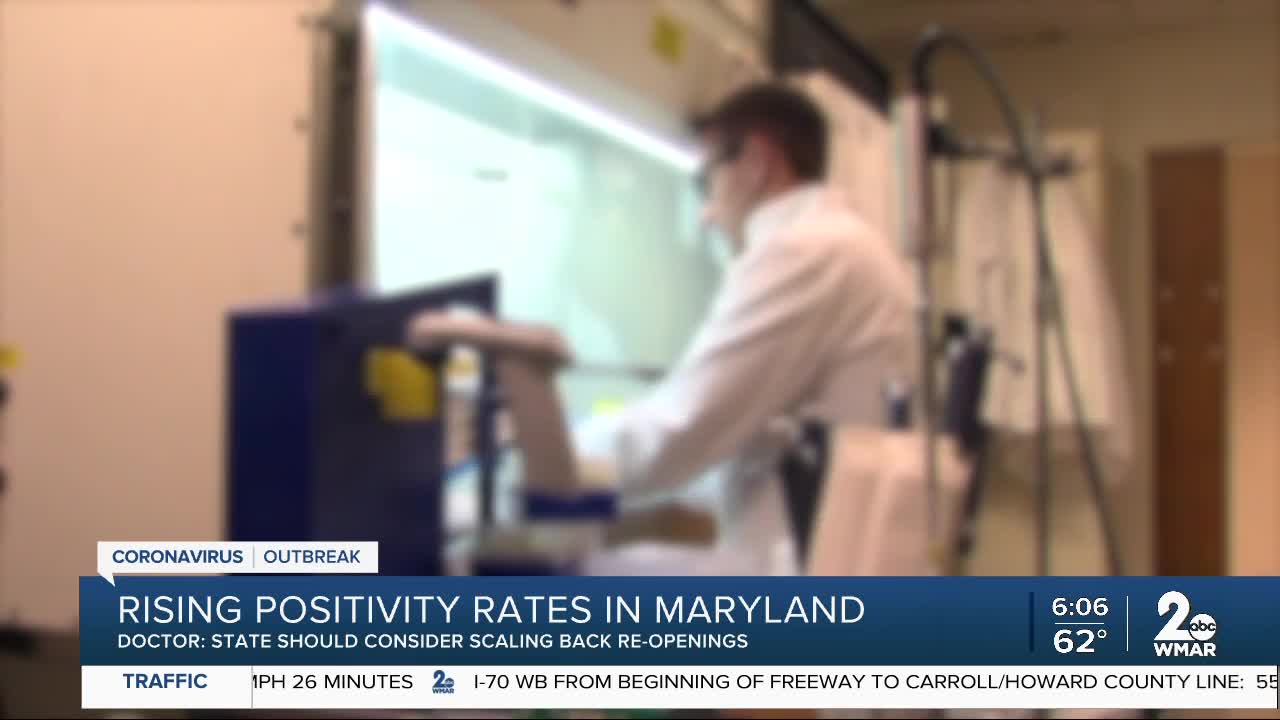 BALTIMORE — The state's COVID-19 positivity rate is increasing, which is raising some concerns for local health professionals, after most of the state moved into stage 3 of reopening last week.

According to Johns Hopkins University, Maryland's positivity rate has been above 5 percent for three straights days. As of Monday, Hopkins said the positivity rate is 5.84 percent.

However, the state health department is reporting a different number.

According to the health department's website, the state's positivity rate is 3.84 percent, which is up from a day ago when it was 3.63 percent.

Dr. Panagis Galiatsatos, who is a critical care physician running the ICU at Hopkins' School of Medicine, said the discrepancy in the numbers is because the two use a different formula. The state uses the total of number tests performed, while Hopkins' uses the number of people tested.

Dr. Galiatsatos said both methods are valid. He added even though the numbers are different, the main takeaway from both rates is that they are increasing, which is something he calls a concern.

“That rise to me concerns me," he said. "Ultimately, that is going to result in hospitalizations and people fighting for their lives so right now I'm concerned about the trajectory.”

He said reopening shouldn’t solely be influenced on a state’s positivity rate. He said other metrics such as hospitalizations and the number of ICU beds should be considered. According to the state, both of those metrics are up from a day ago.

Dr. Galiatsatos said it’s too early right now to say if the state should roll back reopenings, but he added if the trend continues state leaders should think about it.

“Physicians and my nursing colleagues, we are all going to hold our breath and hope it turns out okay and hope people abide by these public health requests," he said. "But, at the same time, we really want to emphasize if things look like they are worsening let's take a step back."

He added, “If it’s too late...unfortunately the outcome of that is people’s lives."

Now that more businesses are open, he said it's even more important to wear a mask, social distance and practice good hand hygiene. He added that is the only way to stop the spread and get back to as close to normal as possible.

Maryland reported 764 new cases on Monday, which brings the total number to 112,883. The death toll is also at 3,660 after five more people died.