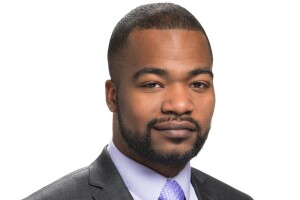 In January 2020, Ray Strickland joined the WMAR-2 News team as a news reporter for the 11:00 p.m. news broadcast after working in Cleveland, OH for nearly two years.

Ray was born in Akron, OH a.k.a. the home of LeBron James (his all-time favorite player) and grew up as an avid Cleveland Browns fan. However, he says he is willing to trade in the team's orange and brown for the purple and gold.

An interesting fact about Ray is that his mother was actually born in Baltimore. His grandfather is a Vietnam veteran, who earned a purple heart, was stationed in Baltimore at the time. Ray's grandmother worked downtown at the social security office.

Ray attended Kent State University, where he earned his bachelor's degree in Broadcast Journalism. In college, he interned at Voice of America for the semester in Washington D.C and fell in love with the DMV area.

After he graduated, Ray packed his car and drove close to 20 hours west to North Dakota to join KXMB in Bismarck. He says it was a blessing in disguise for his journalism career because he got the chance to cover a national story in the Dakota Access Pipeline Protests where more than 200 native American tribes gathered to protest the construction of an oil pipeline.

Nearly two years later, Ray joined KSDK in St. Louis, MO. He covered a number of national news stories there as well, including making his on-air debut when he covered the Congressional baseball shooting that injured several people including a member of Congress.

As much as Ray enjoyed the bi-state, when home came calling he believed he had to answer. He transferred to Cleveland to embark a journey back home. During his time in Cleveland, Ray was awarded an Emmy for his live coverage of a deadly house explosion that nearly leveled an entire city block.

Ray can't wait to explore the city of Baltimore and see what it has to offer. He is excited to be able to tell your stories as he hopes to become apart of your viewing pleasure. When Ray is not working, he enjoys watching LeBron, his Cleveland Browns (see above), working out and trying new food.

If you see him out and about, don't be shy. Say hi!