Sidewalk repairs: Who is responsible?

A tree pushing up the sidewalk is creating a hazard in Mondawmin. Is the city on the hook to remove it and make repairs, or are neighbors? When a woman couldn't get answers she called WMAR-2 News Mallory Sofastaii.

BALTIMORE — It's a stretch of sidewalk where people constantly trip.

“My sister uses a cane. When she comes to visit, they meet her outside and walk her around,” said Tina Burke.

Burke’s family has lived in Mondawmin for close to 70 years. She remembers the tree out front being there for at least 50 years. The sprawling canopy has created great cover and habitats for birds, but it’s clear the tree has outgrown its home. Roots have lifted up one side of the sidewalk, creating uneven slopes and making it challenging for seniors in the area to get around.

In addition to the walking hazard, the uneven sidewalk is a liability.

“Our insurance company came and looked at the property. They saw the damage on the sidewalk and they told us if nothing was done, they were going to cancel our insurance,” said Burke.

She filed a request with 311 in April and followed up with several phone calls, but the June due date came and went.

“It hurts because we’re trying to fix the community and you can't because no one is responding to your calls. You get a lot of promises when you do get the call, and nothing is being done. Nothing is being done,” Burke told WMAR-2 News Reporter Mallory Sofastaii. “You're the only one that responded to me, immediately you responded.”

So did the forestry division after it was brought to their attention. They pruned the tree, didn't remove it, and coordinated with the Department of Transportation to fix the sidewalk.

“So it's a minimal fix,” Klitsch said. 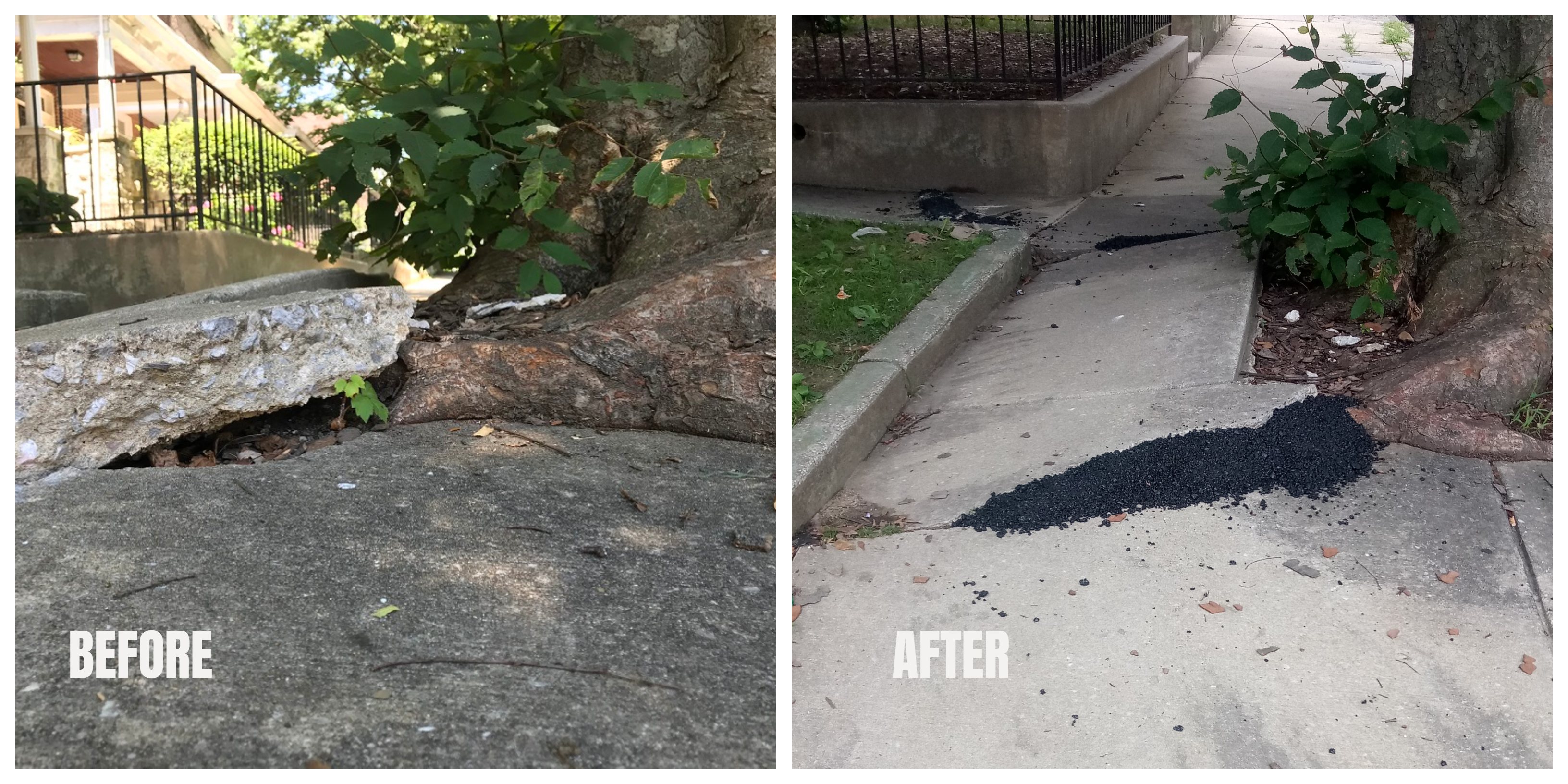 The patchy asphalt laid down by DOT reduces a trip hazard, but it doesn't serve someone with mobility issues.

“This particular section of sidewalk slopes about 6 inches in less than 3 feet and that is extremely steep. There are roofs in the city that aren't that steep,” Klitsch said.

And a little further up the sidewalk, another tree has created a rat problem.

“The tree has pushed up that retaining wall with the roots expanding and will continue to expand as they grow. It will raise that up even higher maybe allowing other rodents to nest into that space,” said Klitsch.

Again, Reporter Mallory Sofastaii brought these concerns to the city. A little more than a week later, a contractor was there taking pictures.

If they remove the tree and re-pave, Klitsch said it'll be costly, but the tree's on public property.

“It would be the city's responsibility and the taxpayers on this street are entitled to a repair, which I would think in a timely way,” he said.

However, if the tree were just a few feet over, Burke would be on the hook.

“Where we're standing right now, we're actually standing on private property, so the city doesn't have to take responsibility for that,” said Klitsch.

Same goes for cracks and broken walkways. Property owners must fix or replace, or receive a bill from the city for the repairs.

The city's "Sidewalk Sam" program is focused on repairing and replacing defective sidewalks. On their website, they cite Baltimore City Code, Article 26, Subtitle 10, that states property owners are responsible for maintaining their footways. In addition to keeping sidewalks free from ice and snow, residents are responsible for repairing their sidewalks should they become cracked or damaged. For more information on city sidewalk repairs, click here.

In a statement, a DOT spokesperson wrote:

We have reached out to our contractor to have this location added to their work schedule, and to contact Miss Utility for identification of any underground utility lines in this area. We are also coordinating with Forestry so that they can be available to assess the tree roots and take appropriate actions so that the new walk can be installed at the proper grade. We anticipate this work to be completed sometime in early August.

Forestry is a small department. According to their website, there are four in-house crews and nine contract crews to maintain the roughly 200,000 street trees in Baltimore.