Paying off debt during high inflation: How a Maryland couple tackled $100,000 in debt

Paying off debt during high inflation

BALTIMORE — While inflation drives up the cost of everyday items, many consumers are struggling with debt.

For Jane Spence and her husband, they owed more than $100,000 in mostly credit card debt.

The Spences refinanced their home mortgage several times, but couldn’t seem to catch up.

“We ended up using our 401K. I used some of mine and he used all of his and that hurt us a lot,” said Spence.

The couple contemplated filing bankruptcy, but then learned about debt management plans.

“In a debt management program, the creditors agree to reduce the interest rates to about 6.4% and have people on a plan to be out of debt within about four years on average,” said Thomas Nitzsche, the director of media and brand for Money Management International (MMI).

MMI administered the Spence’s plan. Their eight credit cards were consolidated into one account. MMI negotiated the interest rate down to 7 percent, and the Spences paid $1,900 a month, which helped them pay off all their debt.

There's a catch, of sorts. You have to close those credit card accounts so you don’t rack up any debt during the process. If you fall into old habits, you risk your creditors pulling out of the program.

The credit counseling agency is also paid a fee.

“On average, client fees are about $24 a month, there’s a nominal startup fee that averages $35,” said Nitzsche.

“What’s called a 'fair share payment.' Basically, in exchange for administering the debt management program, the creditor also gets a percentage as well so there’s a vested interest from both parties in making sure it’s successful,” Nitzsche added. 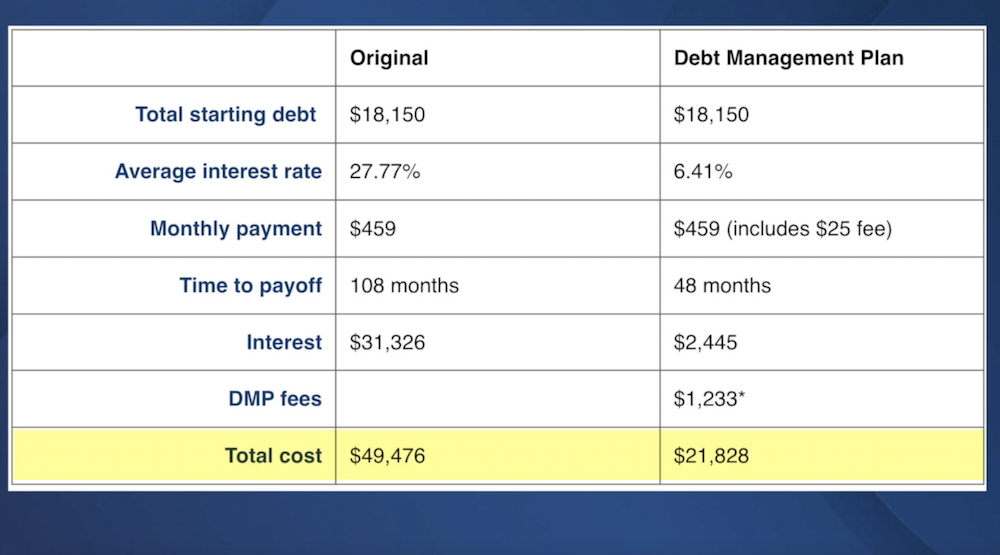 For example, if someone had $18,000 in debt and paid the same amount each month to their lender as they would on a DMP, it’d potentially cost them $27,000 more over time.

This plan, however, takes discipline.

Consumers obtain a new loan to consolidate high interest rate cards, but interest rates vary based on your credit score. The lower your score, the higher the rate.

Debt settlement
With debt settlement, a company negotiates down the amount you owe. Your credit though could tank while you withhold payments and hope that a settlement is reached. You also risk being sued by the creditor.

Bankruptcy
Finally, there’s bankruptcy. You ask a court to discharge your debts. This could have long term impacts on your finances and could cost you any assets.

While none may seem like a great option, they do offer a way out for consumers in over their heads.

“I think it really helped us a lot. We got used to budgeting our money a little better,” said Spence.

“If we can help people get those interest rates and payments down on credit cards that does free up money in their budgets to be able to allocate to real essential needs that they have,” said Nitzsche.

Debt management plans only cover unsecured debts such as credit cards and personal loans, not mortgages or student loans.

And you don’t need a credit counseling agency to reduce your interest rates. Call your lender and see if they’re willing to work with you then also speak with a counselor to compare the rate they’re offering.

Consumers should work with nonprofit credit counseling agencies that are accredited by the National Foundation for Credit Counseling (NFCC).

Click here to find a NFCC agency near you.

Copyright 2022 Scripps Media, Inc. All rights reserved. This material may not be published, broadcast, rewritten, or redistributed.