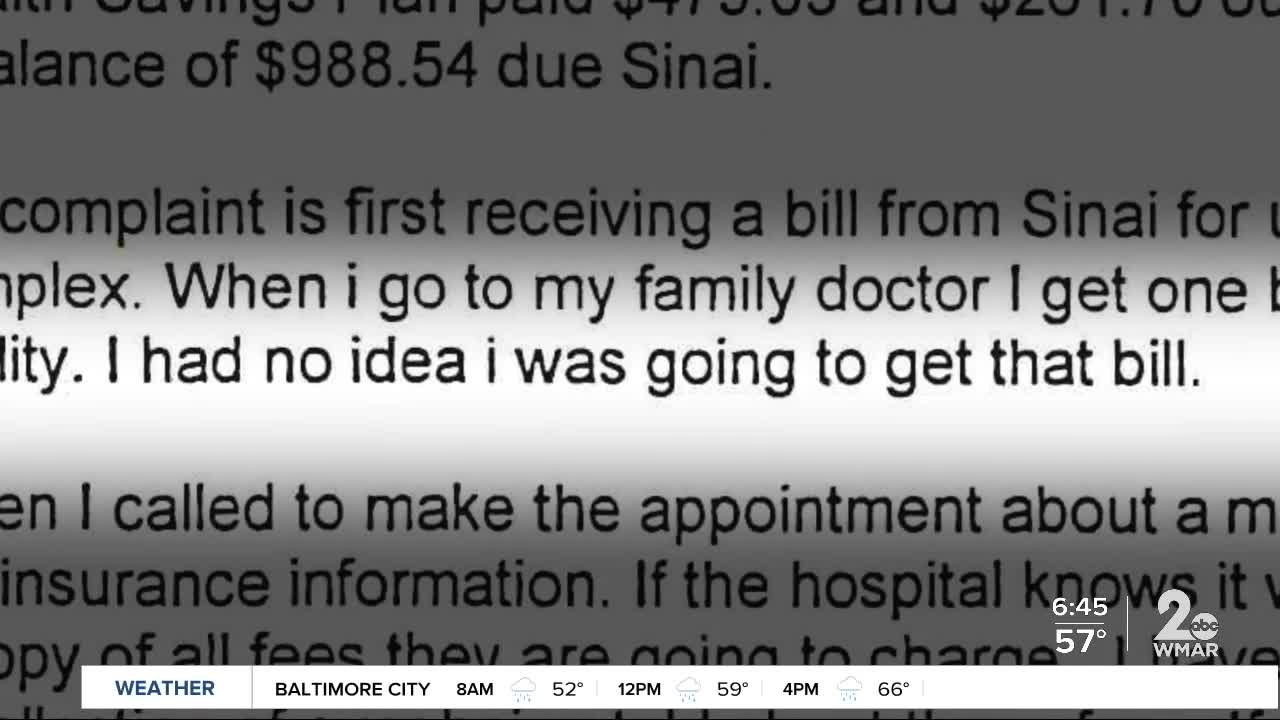 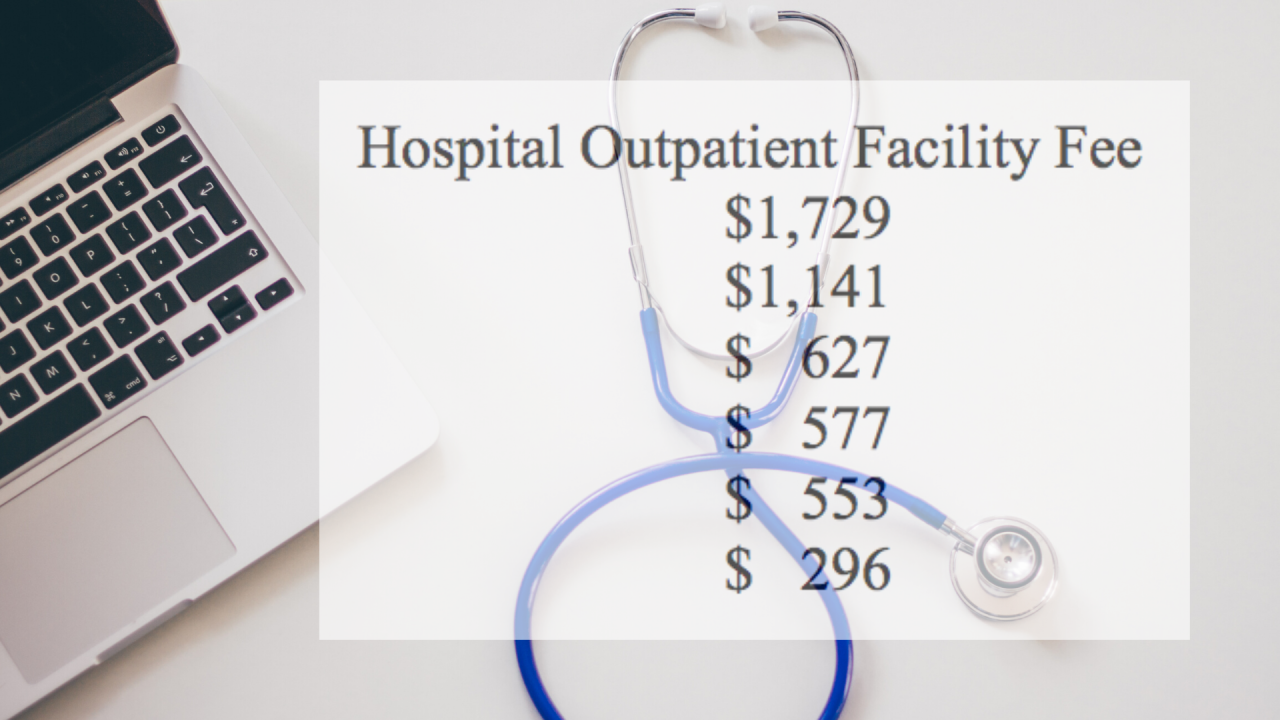 BALTIMORE — It's a hidden charge that could run you hundreds of dollars more in health care costs.

A facility fee is a fee charged by a hospital for outpatient clinic or emergency room services and is a separate charge from professional fees charged by the provider.

“Even though we never set foot in Sinai Hospital," said Speranza.

His wife, a two-time cancer survivor, received treatment at a physician's office next to Carroll Hospital.

“Not being able to associate the fee with a specific service we received was unnerving to say the least,” Speranza said.

In a different case, a patient, who normally saw his rheumatologist in the suburbs instead went to the University of Maryland office ‪building on South Eutaw Street because of scheduling issues.

The appointment lasted around 15 minutes and consisted of a brief discussion. The patient paid his usual $20 in co-pay, then two days later, he received another bill.

The amount billed by the hospital was an additional $1,684.80, and his co-payment was an additional $166.80, according to testimony submitted to the Health Education and Advocacy Unit of the Office of the Attorney General’s Consumer Protection Division (HEAU).

The bill was for a facility fee even though his appointment was blocks away from the main hospital.

Year after year, the HEAU receives complaints from patients blindsided by these fees.

“We think what we were seeing was just the tip of the iceberg,” said Kimberly Cammarata, Assistant Attorney General and director of the HEAU.

“How can hospitals justify charging patients this additional fee if they're not on the property of the hospital?‬,” asked WMAR-2 News Reporter Mallory Sofastaii.

“You know, that's probably a question you should ask the hospitals. We've been asking it. It does seem unfair,” Cammarata said in response.

Why hospitals charge facility fees
The Maryland Hospital Association said hospital-based outpatient service providers see all patients regardless of their ability to pay. And just like there's overhead costs and administrative fees at a private practice, they too need to bill for these services to be able to offer 24/7 care and specialists.

The HSCRC sets rates for services provided “at the hospital” including outpatient clinics that operate within the hospital system. The patient’s insurance coverage will ultimately determine what portion of the facility fee, and overall bill, the patient pays.

However, many of the complaints the HEAU recieves stem from a lack of clarity, including what's considered "at the hospital" and why fees in some cases are so high.

“Consumers are thinking I'm not in the hospital, I'm in the professional office building either right there next to the hospital, or in some cases, we had some patients who were seen in facilities that were blocks away from the main hospital,” said Cammarata. “Or certain floors can be deemed at the hospital but not other floors.”

Notifying patients of facility fees
Right now, the Maryland General Assembly is considering a bill that would inform patients about these fees before their appointment.

The Facility Fee Right-to-Know Act (HB 915) requires hospitals give verbal and written notice of any facility fees at the time the appointment is made and lists other locations the patient can see the provider without being charged a fee. If there’s not another location available, patients can choose a different provider.

“My wife loves her physician, one could suggest this oncologist has saved her life,” said Speranza. “My message to the legislature is it's not about communicating the charge, it's about finding another rider, another vehicle to pay these charges.”

“We certainly raised that option with the General Assembly‬,” said Cammarata.

Last November, the HEAU presented that option in a Senate committee hearing, but after the Facility Fee Right-to-Know Act bill died last year in crossover (even though it passed unanimously in both chambers), the HEAU’S priority is to get meaningful notice legislation so that consumers avoid surprise bills.

“They worked very hard to minimize the impact on hospitals, so you know, but it certainly held up the process,” said Cammarata.

WMAR-2 News reached out to the Maryland Hospital Association for an on-camera interview, but no one was immediately available.

Last week at a hearing on the bill, all parties said they were closer to compromising on amendments to get the bill through this year.

In the meantime, if you're making an appointment anywhere near a hospital, ask “Am I going to be charged a facility fee by the hospital?”

Patients also have the right to obtain a written estimate of hospital charges before receiving treatment.

With or without the bill, fees will be modified
The HSCRC said they've also changed how much hospitals can charge for facility fees.

Starting July 1, the HSCRC will reallocate hospital overhead away from certain outpatient services and spread that overhead to other hospital services.

"Because there are so many other hospital services to spread the overhead across, the changes will have minimal impact on patients receiving these other services," wrote Tequila Terry, deputy director for the Center for Payment Reform and Provider Alignment at the HSCRC, in an email to Sofastaii.

The HSCRC estimates patients should see a decrease in facility fees by approximately 25 percent on average.

This strategy is separate from the legislation in the General Assembly.

“After briefing legislators in November 2019, HSCRC did an analysis of facility fee charges across the State. During this analysis, we saw there was opportunity for improvement in an area that we had been receiving a disproportionate amount of complaints about. HSCRC Commissioners will need to formally approve the changes before they are implemented for in July but we will not need approval from any other entity,” wrote Terry.

In addition, the HSCRC will use a stakeholder workgroup process to review the methods hospitals use to determine facility fee charges for other types of outpatient services. This process will begin later in 2020.

Medical billing complaints
If you have a billing or coverage dispute involving a medical bill, you can file a complaint with the HEAU by clicking here.

The Maryland Insurance Administration also helps resolve disputes between consumers and their insurance provider. If you have a complaint you’d like to file with MIA, click here.