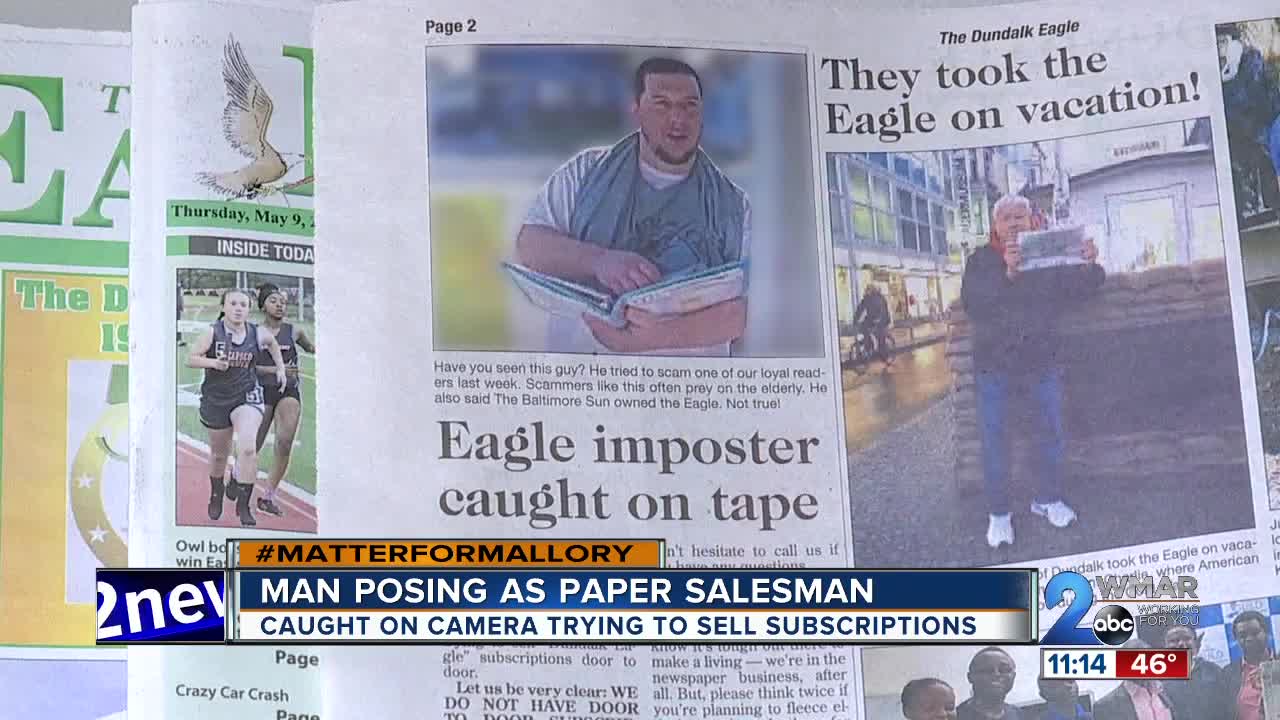 A man posing as a paper salesman in Dundalk has been identified and charged.

BALTIMORE — A man posing as a paper salesman in Dundalk has been identified and charged.

According to Baltimore County Police, Matthew Aldao was arrested Tuesday, December 10 on a warrant service.

On Sunday, Aldao was charged with theft of less than $100, a crime he's faced 31 other times this year. The most recent incident happened on November 5, according to online court records. Aldao has also been charged with four counts of obtaining property from a vulnerable adult with a value that's less than $1,500.

Mike Ursery, the editor of The Dundalk Eagle, first became aware of the impostor when he started receiving calls from readers asking if the paper had sent someone door-to-door to sell subscriptions. Ursery replied that they never do that. A reader later sent Ursery video footage of the man and his pitch.

"You know The [Baltimore] Sun owns The Eagle," says the man in the video to a woman in Dundalk.

In reality, The Dundalk Eagle has no affiliation with The Baltimore Sun.

The man then offers to have the paper delivered closer to the woman's door.

"I'm going to write in the comments spot to put the paper closer up to your porch for you. Not a big deal," he said.

Ursery said he doesn't recognize the man in the video, and he's heard from other people who've encountered him.

The paper published a photo of the man in their October 31 print edition. WMAR-2 News Mallory Sofastaii also spoke with a woman who gave $40 to a man that offered her a deal for subscriptions to both The Baltimore Sun and The Dundalk Eagle.

"That is bad publicity for us because someone is buying a subscription they're never going to get, so that just looks bad on us," Ursery said.

The paper that's been serving the community since 1969 wants to remind people they'll never go door-to door collecting money for subscriptions, to report impostors to the police, and they're asking the culprit to take a long look in the mirror.

"We know it’s tough out there to make a living — we’re in the newspaper business, after all. But, please think twice if you’re planning to fleece elderly people and others for their money. There’s another way. There’s always another way. You can do better than this, and you can be better than this. We hope you’ll take a step back and think about your actions, and how it harms the community and yourself."

"We don't know how many people have been scammed by this person but more people talking, getting the word out, the better," said Ursery. "People love their Eagle, I can tell you that."

Charging documents state that on October 15, Aldao visited a home claiming to be an employee for The Dundalk Eagle and was there to pick up a subscription payment. He didn't try to enter the home and wasn't threatening, but he did make off with $20.

If you want to support your local paper, you can buy a subscription online or drop by their offices.

And if you have a Matter for Mallory, she wants to hear from you. You can email her using the form below or find her on Facebook or Twitter.