In addition to federal and state tax credits, BGE is offering a rebate for customers who purchase their own EV chargers.

BALTIMORE — Maryland is making a push to get more electric cars on the road. The state is working towards a goal of 300,000 electric vehicles on its roadways by 2025, but currently, there are only around 20,000.

EVs are advertised as economical and better for the environment, so why aren’t more people making the switch?

"I think people are kind of afraid. It's a different way to think about fueling your car," said Jones. "They think, 'Oh well, what if I get stuck, there aren't so many places to charge as there are gas stations.'"

According to AAA, in Maryland in 2018, electric vehicle owners placed 231 rescue calls. Of those, nine were for battery-related issues, and one was for fuel delivery.

Jones said if you plan accordingly, you'll be fine. Plus, the savings are hard to beat.

She doesn't miss the mechanic's bills, or stopping at the gas station, however, she does pay more for other parts.

The Economics of Going Electric
Her personal charger cost $500, plus $1,200 for professional installation. A Tesla Model 3, the most affordable model, starts at around $40,000 and costs an additional $10,000 for a long range model that gets you around 310 miles.

Jones was able to offset some of those costs with tax credits reserved for plug-in electric vehicles.

The federal government offers a tax credit of $2,500 up to $7,500 per new EV. Jones received $7,500 and an excise tax credit from Maryland for $3,000. In addition, Maryland’s EVSE Rebate Program offers 40% of purchase and installation price, up to $700 for residential installations. Jones received $700. And, starting this month, BGE is offering another $300 rebate toward a qualified Level 2 smart charger.

"It's an investment in the home; it's going to become something that's a marketing piece in the future," said Kristy Fleischmann Groncki, manager of strategic programs for BGE. 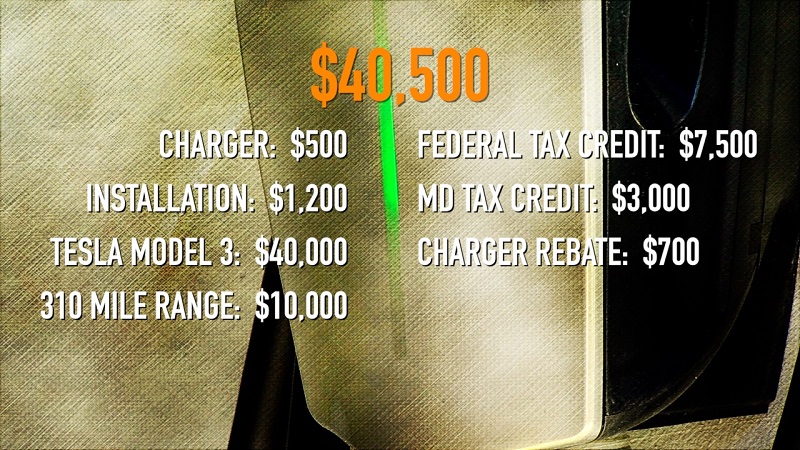 BGE also recently launched an educational campaign showing drivers how much more they spend on gas. Consumers can put in their car's make and model and compare the costs and mileage per gallon. For example, a 2006 Jeep Liberty would get around 17 miles per gallon, whereas a 2019 Tesla Model 3 would get a range of 116 miles for the same amount of $2.95. To see your savings potential, click here.

Downsides of making the switch
There are still some bumps. EV drivers need the right charger adapter for public charging stations and to plan road trips around charger locations. Also, Jones seems to have bought her EV at the right time. The federal tax credit reduces once the manufacturer sells 200,000 qualified vehicles. The tax credit is now around $1,875 for the Model 3, then goes away on January 1, 2020. And funding for the Maryland excise tax credit for Fiscal Year 2020 has been depleted. According to the Maryland Department of Transportation Motor Vehicle Administration's website, no funding has been authorized for Fiscal Year 2021 yet.

As far as costs to your electric bill, Jones said she's seen an increase of around $20 per month, but that can vary based on her mileage and other electric use. And because Maryland has energy choice, she uses a renewable energy company as her electric supplier.