However, auditors found that during that same period, work hours and overtime at the facility increased by 14.6 and 43.5 percent.

And auditors found manager and supervisor vacancies and attendance issues impacted the efficiency of operations at the downtown Baltimore facility.

Between December 2020 and November 2021, the facility had as many as three of its six manager positions filled, and up to five of its 26 supervisor positions vacant.

Auditors said the lack of managers and supervisors resulted in inadequate oversight of operations and contributed to a decrease in productivity.

In addition, a system used to transport letter trays within the facility has been inoperable since March 2019.

This requires employees to load mail in containers and manually transfer it from floor to floor using elevators. Management told auditors that this process adds two hours per day to operations to move the mail. 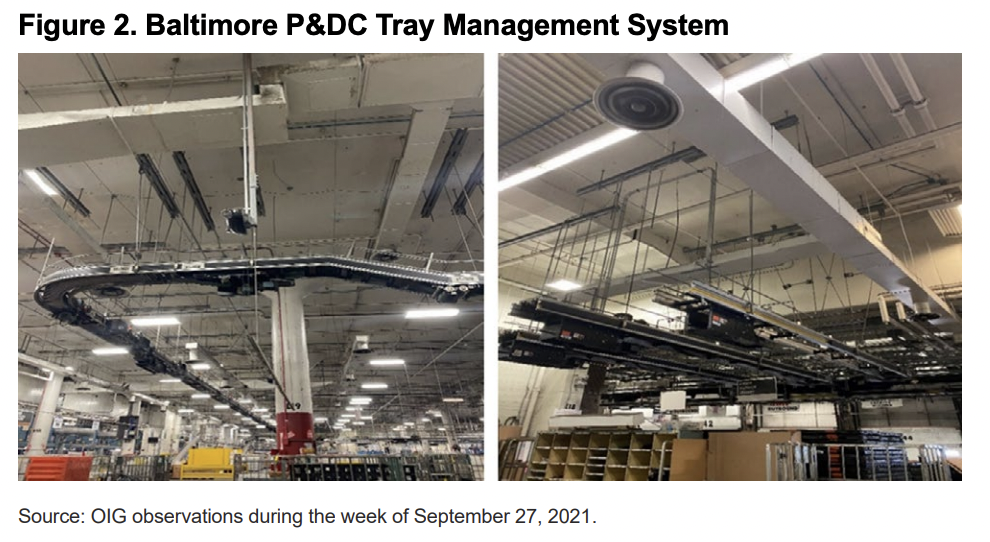 “Management stated that mail was often ready to be dispatched, but the mail handlers failed to bring the mail to the dock in a timely manner because of a lack of supervision, communication, or coordination between mail operations and dock personnel. When the Postal Service uses more late and extra trips, there is an increased risk that the mail will be not be delivered on time and can adversely affect Postal Service customers, harm the brand, send mailers to competitors, increase operating costs, or cause the Postal Service to lose revenue,” according to the audit report.

Management responded to the report by filling several vacancies, stating it will evaluate attendance issues on a weekly basis, and has implemented an operating plan that better allows for appropriate scheduling of employees and supervisors.

Management, however, disagreed with the auditor’s recommendation to prioritize the replacement of the tray management system, writing: “Management disagrees with this recommendation. USPS is developing a Network Modernization Plan in line with the Delivery for America plan resulting in some of our existing facilities being updated, expanded, or replaced that no longer meet the requirements for reliable and efficient processing operations.”

The USPS OIG responded: “We view the disagreement on recommendation 3 as unresolved and will work with management to identify a solution through the audit resolution process.”

In November, the USPS OIG conducted another audit at the request of federal legislators.

Members of the Maryland delegation requested an update from USPS Postmaster General Louis DeJoy on the Postal Service’s efforts to ensure timely delivery of mail during the holiday season. Their letter asked that the Postmaster provide a response by December 1.