Maryland overpaid $1.8 billion in unemployment benefits; claimants worry they'll have to pay it back

Maryland overpaid $1.8 billion in unemployment benefits; claimants worry they'll have to pay it back

BALTIMORE — Many people are back to work, but their struggles with the Maryland Department of Labor aren’t over.

Claimants have been told they were paid too much, in some cases, tens of thousands of dollars. They've filed waivers to get those debts cleared, but WMAR-2 News Mallory Sofastaii continues to hear from claimants who say they haven’t heard anything back from the Department. 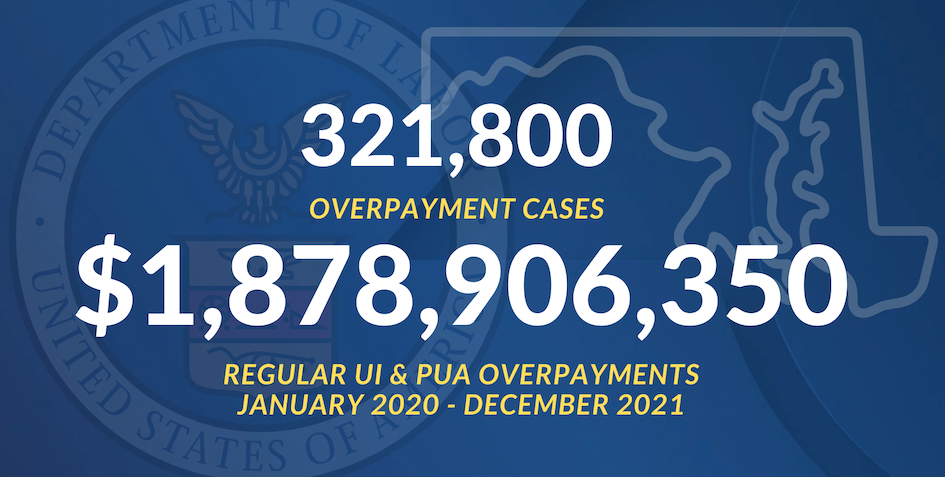 The state is only second to Ohio in total Pandemic Unemployment Assistance (PUA) program overpayments. 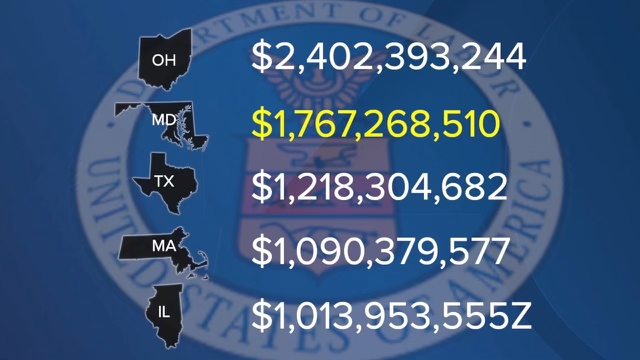 The Department said most of these overpayments are due to claimants not providing accurate income information and federal guidance not requiring verification before issuing payments.

Claimants blame the Department for not issuing the correct amounts or say the overpayment is an error.

“It says you have an overpayment of $14,700 something,” said Ethan Montgomery.

“They said I had an overpayment of $10,972. Not fraudulent,” said Janice Singletary-Mugar.

Before the pandemic, Singletary-Mugar demoed products at BJ’s.

“Being 70-some, you’re right in people’s faces, we couldn’t do the job, so they shut it down,” said Singletary-Mugar.

“All their customers stopped coming, everything stopped, so my job was lost,” Mann said.

And Ethan Montgomery is a sound engineer.

Pandemic-relief programs made these workers eligible for unemployment benefits, so they applied not thinking they would have to pay that money back.

“It was them that determined this is what my benefit should be. They were giving me the minimum until they looked at the documents that they asked for and then they said, 'No, you actually max out the benefit,'” Montgomery said.

Montgomery said he provided accurate income information and shouldn’t be responsible for the $15,000 balance.

USDOL data shows 99.98 percent of overpayments were non-fraudulent, which means it could’ve been due to an error by the Department or the claimant.

The Department has received nearly 8,000 overpayment waiver requests since August. Roughly half have been waived and the other half is still pending. A spokesman said the Department has a dozen people working on these waivers on any given day. They’re processed in the order received and they’re currently working on waiver requests from late November. 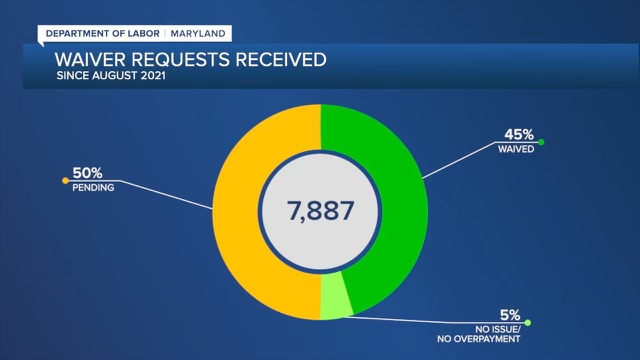 Montgomery and Mann filed waivers several months ago but haven’t yet received a response.

“I was supposed to get a certain amount and they took half of it every week to go to the overpayment. And I’m like hey, I kind of need that, I have a baby. I have to pay my rent,” said Mann. “I was trying to get a hold of them every day and it started weighing on me."

Claimants, like Mann and Montgomery, say they want more communication as the decision on these large debts hangs over their heads.

“I’m supposed to be getting married next year, hoping to buy a house. Well, I can tell you $15,000 goes a long way in terms of a down payment on a house, so if I have to give them $15,000, buying a house after I get married is probably off the table. I don’t know,” said Montgomery.

Sofastaii reached out to NASWA to see if they’ve received a response yet and if they support waiving non-fraudulent overpayments in the regular unemployment insurance program. This story will be updated with their response.

Overpayment refunds
The Department is also issuing refunds to claimants who had started paying their overpayment balance, then had it waived.

According to a Department spokesman, the total calculated refund amount to claimants is roughly $6 million. Out of this $6 million, $2.2 million has already been refunded. The Department did not provide a timeline for when the remaining amount will be issued but said they are working as quickly as possible to process refunds and are hiring additional staff to assist with this process. Checks are being sent through the mail.

Claimants can still file overpayment waivers. Click here for a link to the form.

Copyright 2022 Scripps Media, Inc. All rights reserved. This material may not be published, broadcast, rewritten, or redistributed.