BALTIMORE — There's more relief for Marylanders struggling to pay their medical bills. Free and reduced cost care is now available to more people, however, not everyone knows they have this right.

“You shouldn’t be going into poverty because you sought care,” said Marceline White, executive director with the Maryland Consumer Rights Coalition (MCRC).

MCRC, along with several other organizations, issued a report proving the need for better protections by analyzing court records.

“What we found is there were more than 145,000 people in Maryland that were sued because they went to the hospital and were ill and couldn’t pay their bill, and moreover, what we found is the median amount owed was under $1,000,” White said.

Erika Dworkin hated the feeling of being in debt.

“Maybe to some $600 isn’t a lot, but it really weighed on my conscience,” said Dworkin.

Her debt accumulated through co-pays and fees. She was jobless at the time and said she couldn’t afford to pay her bill.

This debt, however, could’ve potentially been avoided.

New protections passed by the Maryland General Assembly in the last two years expands the number of people eligible for free or reduced cost hospital care. Eligibility is based on federal poverty guidelines and programs vary by hospital.

“So what we’ve done is launched a medical debt protection guide,” White said.

MCRC's new website includes step-by-step instructions on how to check if you qualify for free or reduced-cost care, where to find hospital assistance policies and applications, how to get help if you’re denied assistance, and explains the rules surrounding debt collection.

“Because of the new legislation, hospitals are supposed to tell you multiple times that you qualify and that you should look into it, but you can wait until you get the first bill. And because of the legislation that we passed, if your circumstances change, you have 240 days to apply,” White said.

And if you still incur debt and don’t have the means to pay it, MCRC’s Medical Debt Freedom Fund covers certain debts under $1,000.

“I applied and I received a call immediately,” Dworkin said. “It was only a matter of a week and a half before I had the bills paid.”

At the start of this year, a federal law required all hospitals to post pricing information online. Maryland hospitals have been doing this for several years, however, Ben Steffen, executive director with the Maryland Health Care Commission, said this still doesn’t give patients a full picture of the costs they'll incur.

“You rarely see information on what the surgeon or what the post-hospitalization rehab services will cost,” Steffen said.

So, the commission compiled data on the total cost of care and made it so patients can price compare what it considers to be "shoppable procedures."

“I’m going to do the hip replacement, it’s a personal favorite,” said Steffen demonstrating how their website works. 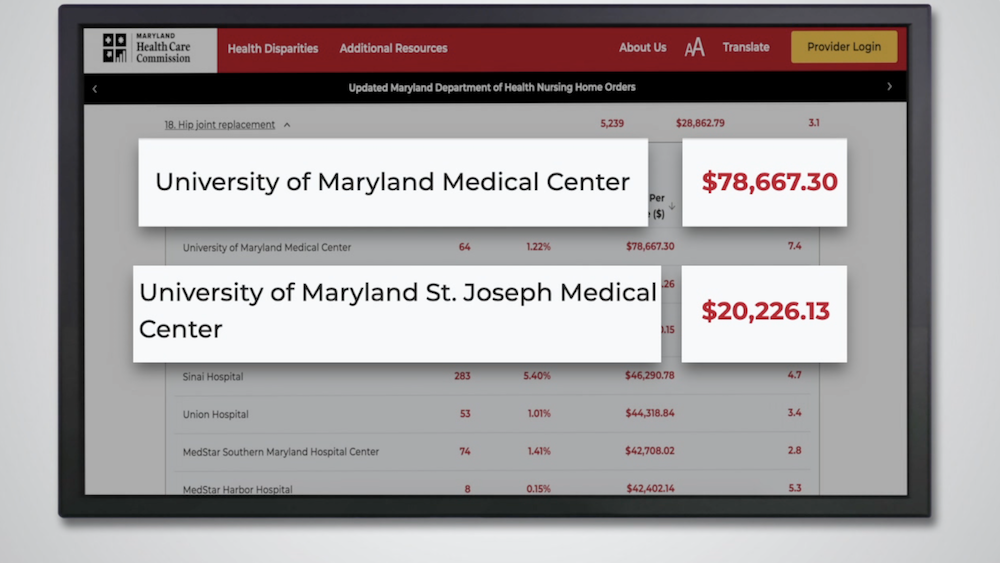 Everyone wants the best care, but Steffen said not to confuse cost with high quality.

“The hospital costs at an academic center will be higher because there are associated costs related to teaching that a community hospital like St. Joe’s wouldn’t necessarily have to absorb,” Steffen added.

And consider the volume of procedures, which tends to be lower cost. There were around 640 hip replacement procedures in 2020 at UM St. Joseph Medical Center versus 64 at UMMC.

Steffen realizes it’s not practical for consumers to simply select a hospital based on money alone. Choosing a physician that’s in-network is the first step. And he knows patients have relationships with doctors who can only operate at certain hospitals. However, it's sometimes possible to choose a hospital first, especially for births, where the costs can still vary by thousands of dollars. 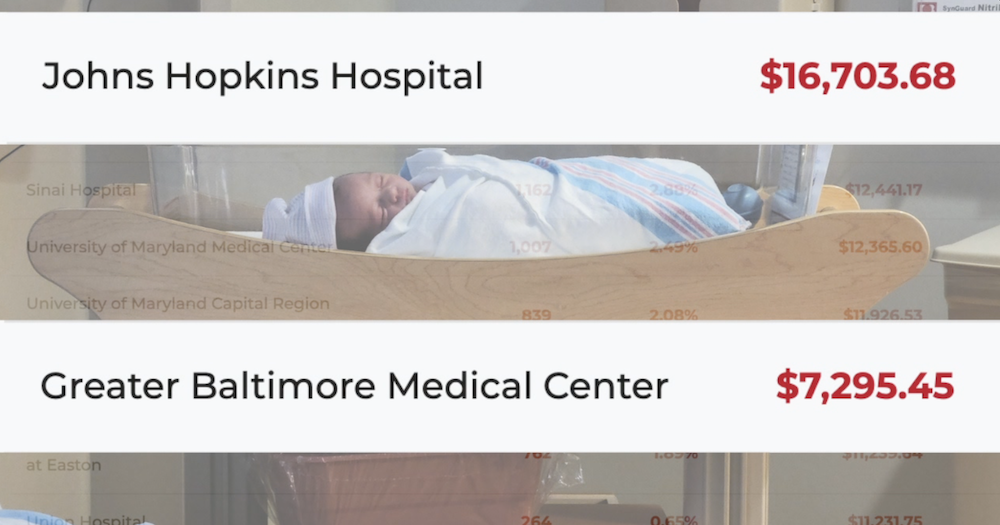 And while your insurance will foot the majority of the bill, Steffen said picking a lower cost hospital drives competition between hospitals, and impacts how much you pay for insurance coverage.

“It may not affect you directly, your coinsurance or copayments may not change, but the dollars to the insurance carrier are going to be higher and they’re eventually going to percolate down into your insurance premiums,” Steffen said.

For emergency procedures, patients aren’t able to shop around, but patients or a loved one can still request that providers treating the patient are in-network.

And when it comes to billing, patients can call the hospital and ask to negotiate a payment plan as well as request an itemized bill, so you can question any charges that seem high or unnecessary.

On Wednesday between 12:30 p.m. and 1:30 p.m., MCRC will host a medical debt and health care virtual town hall with Senator Chris Van Hollen and several other leaders. The topics include access to health care, medical debt, and federal and state policies. Click here to watch the town hall.