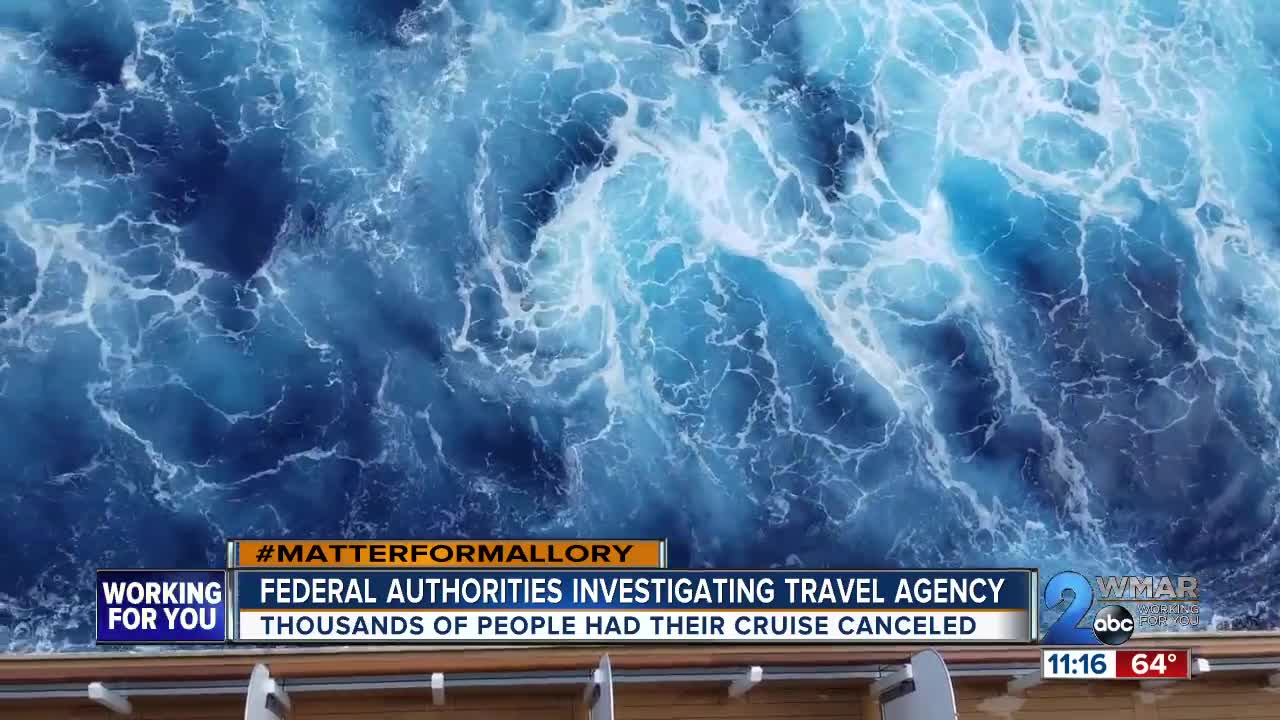 BALTIMORE — Thousands of people who booked cruises through a Florida travel agency are learning their trips have been canceled.

Diana Hopkins of Hopkins Travel Services sent out an update on Facebook over the weekend saying the change of plans was due to "unforeseen circumstances."

"This matter is currently under investigation by the federal authorities. It would be inappropriate for us to comment. However, please know that we are actively working with those guests affected."

Robert Dorbit was scheduled to go on a seven-day roundtrip cruise from Venice, Italy to the Greek Isles in May of 2021. He first saw the deal on Facebook in May. Hopkins Travel Services was offering a "buy one, get one free" promotion that would save customers nearly $2,000. Before paying for the trip in full, he first paid the company a small deposit.

"Once I put the $100 deposit down and realized that my reservation did show up on NCL.com, where I created my profile, logged on, saw my wife’s name was in there, the date was on there; it even said 656 days until you sail. Once I saw that it was legit, I did pay the balance in full," Dorbit said.

"I actually have a honeymoon couple my wife and I met almost 10 years ago flying in from California to go with us on this cruise," said Dorbit.

The deal continued to travel on social media and throughout Dundalk and Pasadena.

"A lot of my family, friends, my whole church crew, everyone booked and got into the spirit of it," said Jennifer Shaffer who was in a crew of around 14 people who used the agency. "It was incredible. I've never been to Europe, this was going to be a great anniversary cruise for us."

Then last weekend, Hopkins notified customers that the trips were canceled.

"A simple Facebook post that the trip was canceled due to circumstances outside of her control," Dorbit said.

On Tuesday, Hopkins sent out an email saying they're working to process refunds and are no longer working with the cruise line. She also offered to rebook customers. "We are working on another fantastic deal for you and changing to another cruise line! Unfortunately, we are not able to discuss the reasons for this decision at this time," wrote Hopkins.

Norwegian Cruise Line now has a voicemail set-up specifically for customers of Hopkins Travel Services. The voicemail message belonging to a NCL supervisor states in part:

"... please note there have been hundreds of calls to my number in the last two days and it will take some time in getting back to you each individually. For further information, please note that we are canceling all the reservations and due to the fraud issue, if your card is on the reservation, it will be refunded."

Customers who paid with credit card were also encouraged to contact their credit card companies.

Dorbit tried calling his credit card company. He was told the transaction was outside of the 60-day dispute window, however, he may have other recourse since the trip hasn't happened yet.

WMAR-2 News asked NCL for details on the "fraud issue" and whether customers who paid in cash will be refunded. The cruise line did not share any additional information, but said guests can contact the FBI Tampa Field Office at (813) 253-1000.

WMAR-2 News also reached out to the FBI for comment. This story will be updated with their response.

WMAR-2 News Mallory Sofastaii tried contacting Hopkins by phone, email, Facebook, and at a Cockeysville residence previously tied to her business and home. Hopkins has not yet responded.

If you have a Matter for Mallory, she wants to hear from you. You can contact her using the form below or by Facebook or Twitter.