Nyla was on a grain-free diet when she was diagnosed with dilated cardiomyopathy. Her owner has since switched her food and believes it's now saving her life.

BALTIMORE — For the first time, the Food and Drug Administration has released the names of pet foods potentially linked to heart disease in dogs.

This is the third status report the FDA has issued on its investigation into certain diets and canine dilated cardiomyopathy (DCM). While the FDA still doesn't know how certain diets may be associated with DCM in dogs, they've seen an increase in the number of reports, particularly in atypical breeds. The public health agency received one report of DCM in dogs and cats in 2014, compared to 320 in 2018. From January 1, 2019 through April 30, 2019, there have been 197 reports of DCM in dogs and cats.

Alison Sheaffer's 5-year-old double doodle Nyla was diagnosed with DCM this year. She learned in February that Nyla had an enlarged heart and may only have a year to live. Sheaffer immediately switched Nyla's diet from grain-free, and five months later, she's showing improvements.

"They are unsure if it will ever reverse, but she has definitely has had some improvement, so we're hopeful for that," Sheaffer said.

Sheaffer's also been giving Nyla medications, up to five pills a day, however, she believes it's the food that's made the biggest difference. Of the 16 pet foods named in the latest FDA update, Sheaffer said she fed Nyla five of the brands.

"I thought I was feeding really good food; it was not cheap food," Sheaffer said.

Dr. Steven Rosenthal, a board-certified veterinary cardiologist with CVCA Cardiac Care for Pets, has also seen improvements in his patients after their grain-free diets were discontinued. On the other hand, he's seen pets' health decline and pass away. He suspects grain-free diets play a role in the disease, but said there are other factors to consider.

"Is it just diet? Is it environment? Is there some potential genetic factors that might be predisposing them to these dietary mediated disorders?," said Dr. Rosenthal.

And he doesn't necessarily think grain-free diets in general are the cause, rather the ingredients that are replacing grains in the different food brands may be to blame.

"Our concern is that a high percentage of the reported cases have both lentils and chickpeas, or at least one of those two in the diet, so we wonder if that may be related to why we're seeing this," said Rosenthal.

More than 90 percent of the dog foods named in the FDA report were "grain-free," and 93 percent of reported products had peas and/or lentils. 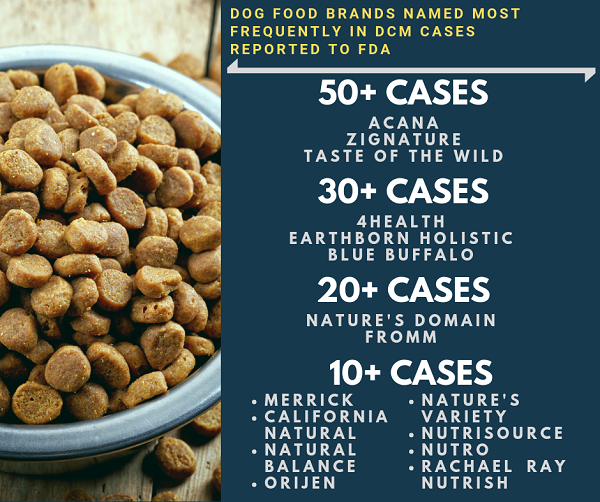 While these are all still theories, Sheaffer feels it's important for pet owners to continue to educate themselves. Not all dogs show symptoms of the disease. Looking at Nyla run circles on the lawn, you'd never know she has an underlying disease.

"I personally let her play and jump. I want her to have a quality of life, so if she wants to play and jump that's what she wants to do, and if something happens, it's going to happen. It's all in God's hands, that's how I feel," said Sheaffer.

DCM symptoms
Dr. Rosenthal recommends bringing in your pet for evaluation if they show the following symptoms:

Researching dog food companies
The FDA is urging pet owners to work with their veterinarians, who may consult a board-certified veterinary nutritionist, about dietary advice for their pet's specific needs.

"Breeds who are specifically at risk for cardiomyopathy, I would suggest not choosing a grain-free diet and choosing a diet that hasn't been implicated as a part of the diets listed by the FDA," Rosenthal said.

WMAR-2 News reached out to The Pet Food Institute (PFI) for their response to the FDA's investigation. They sent WMAR-2 News Mallory Sofastaii the statement below:

“As the pet food makers for many of America’s dogs and cats, PFI members are committed to the production of safe, nutritionally balanced pet food. Our member company experts, who bring decades of experience in companion animal nutrition, are collaborating closely to advance the understanding of any potential relationship between certain dog food diets and a type of canine heart disease known as dilated cardiomyopathy (DCM) in dogs not genetically pre-disposed to the condition. The U.S. Food & Drug Administration has not advised any dietary changes based on the available information. Millions of dogs are thriving on grain-free dog food every day. We remind pet owners to consult their trusted veterinarian with any questions regarding their four-legged family member’s health and well-being.”

If you have a Matter for Mallory, you can email her using the form below.