Accusations date back to 2016 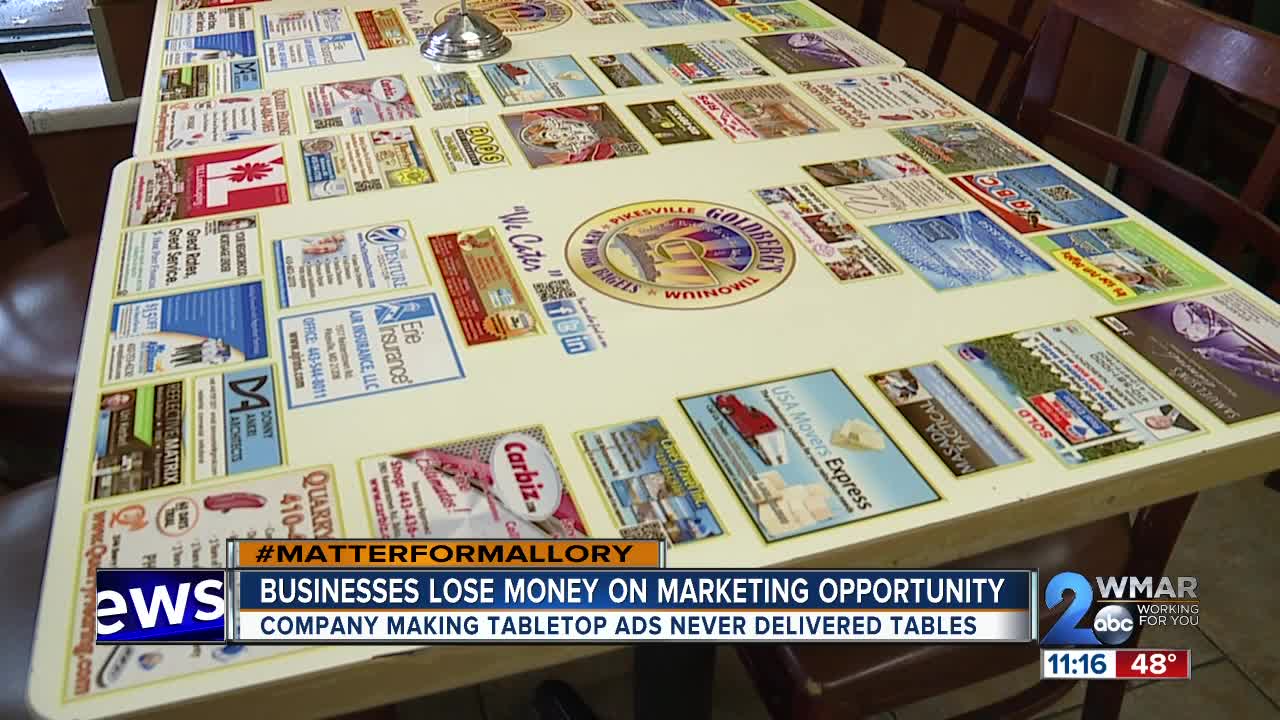 A tabletop marketing company is accused of bilking local businesses out of thousands of dollars.

BALTIMORE — A tabletop marketing company is accused of bilking local businesses out of thousands of dollars.

Gregory Asch, owner and operator of GA Eldercare and Wellness Services, was looking for a way to spread the word about his business. He saw an ad on Facebook to have his company's name plastered on the tabletop of a local restaurant, and he thought it was the perfect marketing opportunity.

"There was an ad to be on a laminated advertisement at a local Pikesville bagel shop and the tables were to stay in place for like 2.5 years," said Asch.

He says he messaged the business, Marketing Pros 4 U, and immediately heard back.

"This woman contacted me back, Angela Gordon, and we had a conversation or two and then all in one day, I believe, she wanted to meet me at the appointment I was on with a client. And she said, if I paid in full, I’d get a 10 or 15 percent discount," Asch said.

Gordon met Asch at his appointment where he gave her a check for just over $1,400. The check was cashed the next day but Asch said it took around six weeks to receive the proof.

“I was hounding them, and every time I called, a doctor’s appointment, getting on an airplane, I’m in the dentist’s chair, we had a flood in the warehouse that was a good one," Asch said.

Asch finally received the proof, but the tables were never delivered.

"The way it works is I get the tabletops, I don't make any money," said Drebin. "The company I was using was working out fine, but they dropped the ball on me, so another company happened to walk in right when I needed them and he seemed like an honest fellow."

Another local business told WMAR-2 News that he paid Banks nearly $2,000 for a tabletop advertisement at Goldberg's Bagels and never received a refund from the company.

A news station in Missouri recently reported about a local store that gave Marketing Pros 4 U money and received nothing in exchange.

And back in 2016, a Virginia Beach business owner won a judgment against Marketing Pros 4 U, according to online court records. Shirley Dale of Cherish Pet Cremation Services said she paid the business around $1,300 but the tabletops were never delivered. Despite obtaining the judgment, Dales said she was unable to collect money from the business.

WMAR-2 News Mallory Sofastaii reached Davell Banks, owner of Maketing Pros 4 U, by email. Banks wrote: "We have had our problems." He added that the project at the bagel shop was canceled and they've since shut down the company. Sofastaii asked whether he plans to issue refunds to Asch, Dale, and the third business owner. Banks said "2 of the 3 will be refunded in 90 days."

WMAR-2 News also confirmed that the business hasn't been at the Florida address listed on their website for several years. And online records show the company's Florida business license expired in 2016.

Asch lost his marketing budget on the deal and is trying not to let the situation impact his customers.

Even though the company stopped responding to Asch and Drebin, the tabletop ads are still in the works. Drebin said he's working on finding a new company to fulfill the orders.

"I'm going to pay for it to cover these people's losses. Not because I'm responsible, but I feel that it's the right thing to do," Drebin said.

If you have a Matter for Mallory, she wants to hear from you. You can contact her using the form below or find her on Facebook and Twitter.