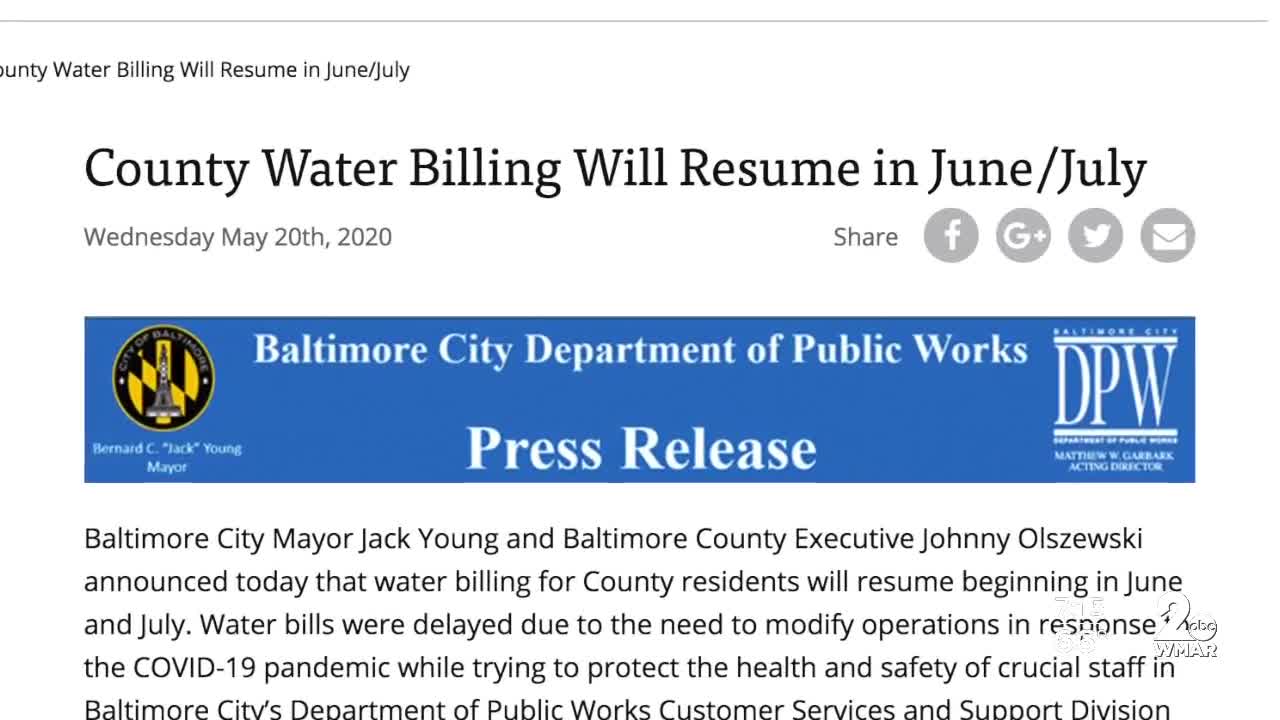 BALTIMORE — The pandemic has put a lot of things on hold, including bills, but many in Baltimore County are wondering when they’ll receive a water bill again and how high it’ll be.

In May, the Baltimore City Department of Public Works announced billing had been put on hold for county residents in order to modify operations to keep staff safe, however, it would resume in June and July.

Her account shows the current billing information as January 29, and a penalty date of January 2021. Otte continues to check the online billing site, but there hasn’t been any update.

“I spoke to someone in Baltimore City and said, 'I haven’t received my bill since February, do you have an update on when we will be receiving a new one?’ I gave her my address and she said that oh, you live in Baltimore County, we have no estimated time as to when Baltimore County will be sent out,” Otte said.

According to a press release issued in May, it should’ve come in June or July. Officials said water bills were delayed “due to the need to modify operations in response to the COVID-19 pandemic while trying to protect the health and safety of crucial staff in Baltimore City’s Department of Public Works Customer Services and Support Division which manages the water billing system.”

“I understand with COVID that things were shut down, but I think it’s past time that we should have received a bill,” said Otte.

After multiple requests for information, a DPW spokeswoman sent WMAR-2 News Mallory Sofastaii the statement below:

"DPW is working closely with the County on how to obtain reads and generate bills in an effective manner. Bills are prepared differently than those for City residents. A plan to resume is forthcoming very soon."

Sofastaii sent follow-up requests asking how the process is different, aside from the billing increments, county is quarterly while the city is monthly, and why billing didn’t resume in June and July as stated earlier. DPW didn’t answer her questions.

The spokeswoman said they will know more by the end of the week as they are continuing to work with the county.

A Baltimore County spokesperson sent the following statement in response to the delayed bills:

There are options for customers concerned about paying a high water bill. Baltimore City Mayor Jack Young reinforced that water service will not be shut off due to nonpayment and that late fees will be waived while residents deal with the implications of the coronavirus. DPW also has repayment plans for customers who fall behind in their water bills, as well as the Emergency COVID-19 Discount program. The program will remain in place until 90 days after the end of the current state of emergency or December 31, 2020, whichever comes first. The discount is good for one year.

To apply for the program, click here or call (410) 396-5398 to request an application. Applications by mail will also be accepted.