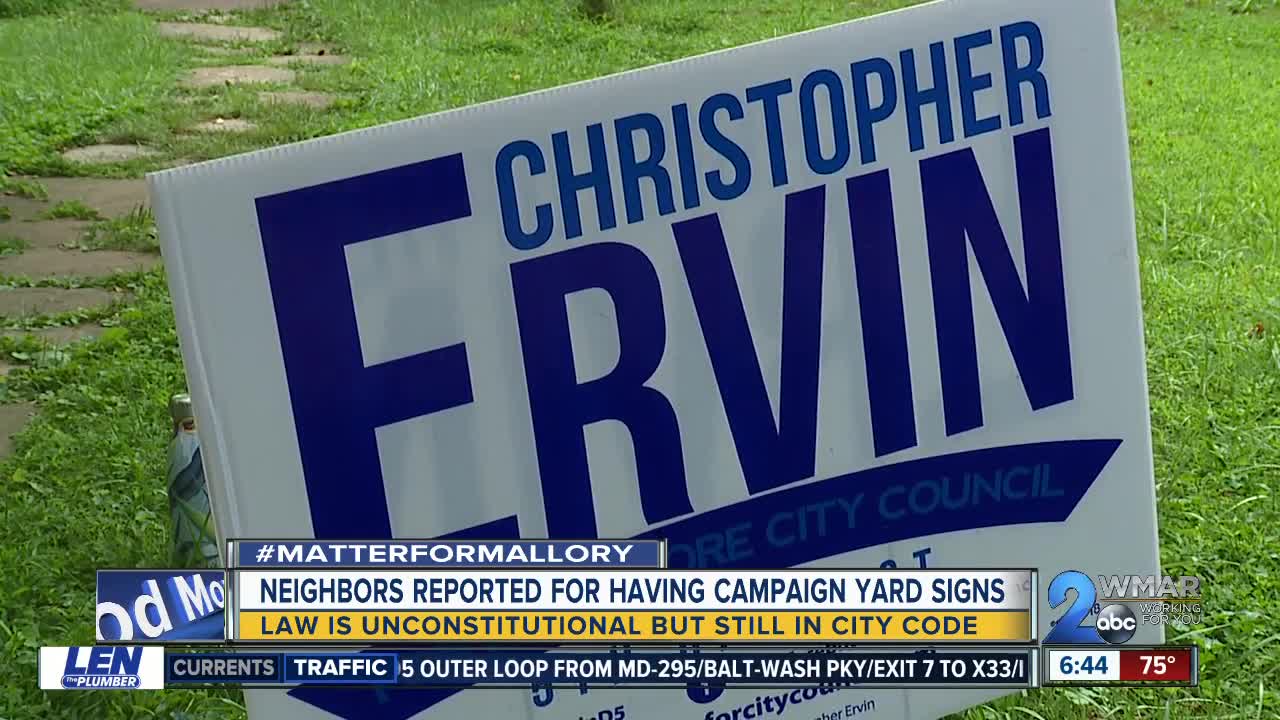 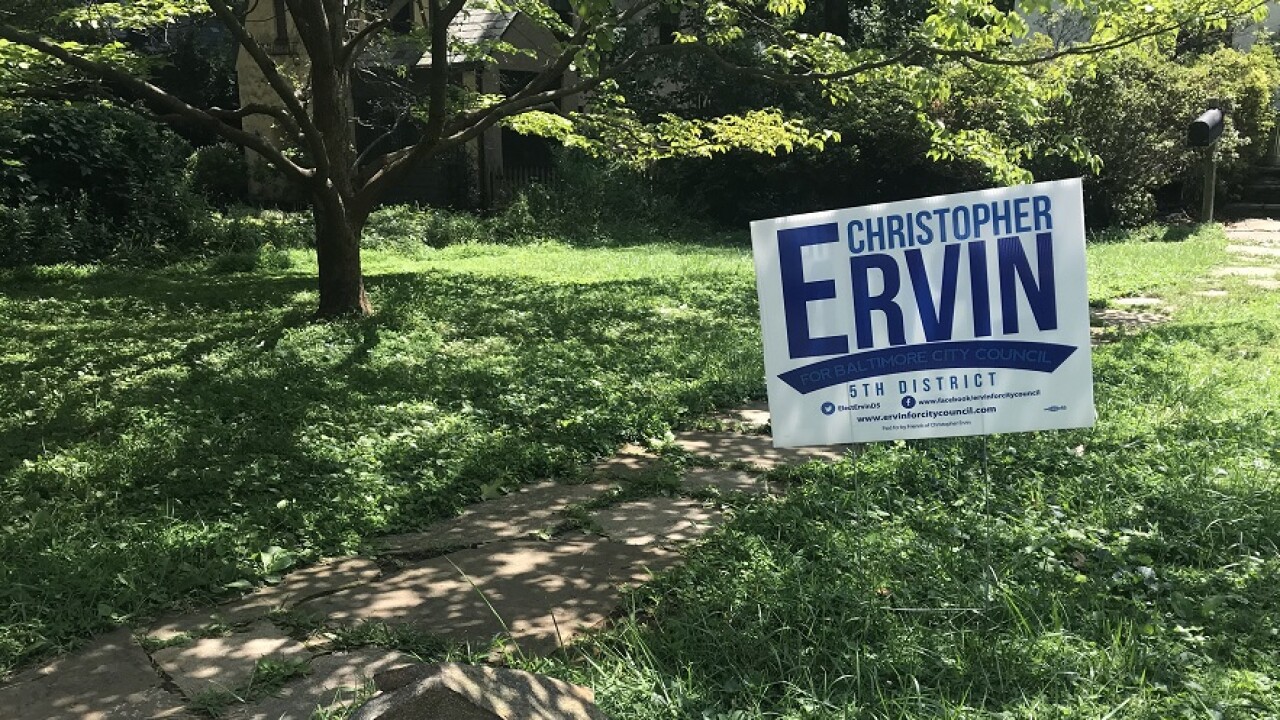 BALTIMORE — Neighbors in Mount Washington are being reported for their campaign yard signs. The complaints allege that signs are being displayed too early before an election.

Eight neighbors within three months were all reported to 311. Aside from the location, the neighbors had something else in common – the signs reported as illegal were all for Christopher Ervin, a candidate running for Baltimore City Council, District 5.

Seema Shah-Nelson’s friend took a picture of the 311 complaint when a housing inspector came to her door to investigate. The complaint was for an illegal sign on public property and the description said “$500 fine for displaying political signs 45 days before election.”

“I was scared that I would have to pay $500 for something that I didn't know was against the rules and then confused about why this rule exists,” said Shah-Nelson.

After some digging, she found out it doesn't exist, and the law is unconstitutional.

“We don't enforce it based off of some litigation that occurred about 10 years ago in Baltimore County and when that occurred, we removed the violation from our index of violations that inspectors can issue,” said Jason Hessler, deputy commissioner of permits and litigation with Baltimore City Housing and Community Development.

And yet, the law is still in the City’s Code.

“It is. Yes, it's just something that's never been addressed by the council,” Hessler said.

He said the neighbors won't receive a citation, and the inspector was only there because it was entered into the system incorrectly.

“[The person who filed the complaint] fit it in under something that was close, but it's not in the 311 system, and I can't remember, it's been over 10 years since we've received a complaint of this nature,” Hessler said.

While not enforceable, neighbors still want the code corrected and a full investigation. Earlier this month, they sent a letter to Mayor Jack Young expressing concern that “someone may be manipulating the system in an effort to keep residents from exercising their first amendment rights.”

“We moved out of an apartment last year and I got my own home and it's exciting to have a place on my private property where I can put up a sign and there's a candidate I'm excited about,” said Amalie Ward, another neighbor whose Christopher Ervin sign was reported as illegal to the city. “I don't want people to feel intimidated like they can't have a sign on their private property.”

When signs are illegal
What is enforceable, and illegal, are signs on public property. They’re prohibited in the median, on phone poles, even flyers can be reported as unlawful. Signs on private property also need to be smaller than 16 square feet.

“I go on weekly walks with the mayor and I carry a pocketknife with me so I can cut them down and I'll take photos and give it to the investigators,” said Hessler. “We do cite people and we've even gone to the extreme of when we can't track someone down electronically, we'll set up and call and try to sell them a city property so they'll come out and we can identify who they are and get their tag.”

The fine for illegal signs on private property is $500 per sign.

“I can remember where we got like $40,000 against one company that was going around, and they were kind of the captains of the ‘we buy houses,’” Hessler said.

He added that the illegal signs are litter and more work for city inspectors.

“Somebody coming from outside posting these things all over the place, and they're usually yellow corrugated plastic and with a marker, it just makes everything ugly,” said Hessler.

City inspectors are somewhat lenient on yard sale signs and community fundraisers, but if you're a business cluttering the city's roadways, expect a call from code enforcement.

And if you're complaining about campaign signs in someone's yard, the city isn't going to help you.

Hessler brought the unconstitutional law to the attention of the City’s Law Department. WMAR-2 News Mallory Sofastaii spoke with City Solicitor Andre Davis on Monday who confirmed that he is working to remove the provision and will forward the matter to the Department of Legislative Reference.