Moving company's license revoked due to safety, not the 250+ violations

A moving company's failure to submit to a safety audit was the reason the government took away its moving license. But it was also cited with 256 violations, according to documents obtained by ABC2 News through a Freedom of Information Act Request.

Presidential Moving LLC, based out of Arlington, Texas, had its interstate moving authority revoked on March 19, 2018 by the Federal Motor Carrier Safety Administration (FMCSA).

The company will need to reapply to be granted operating authority again. 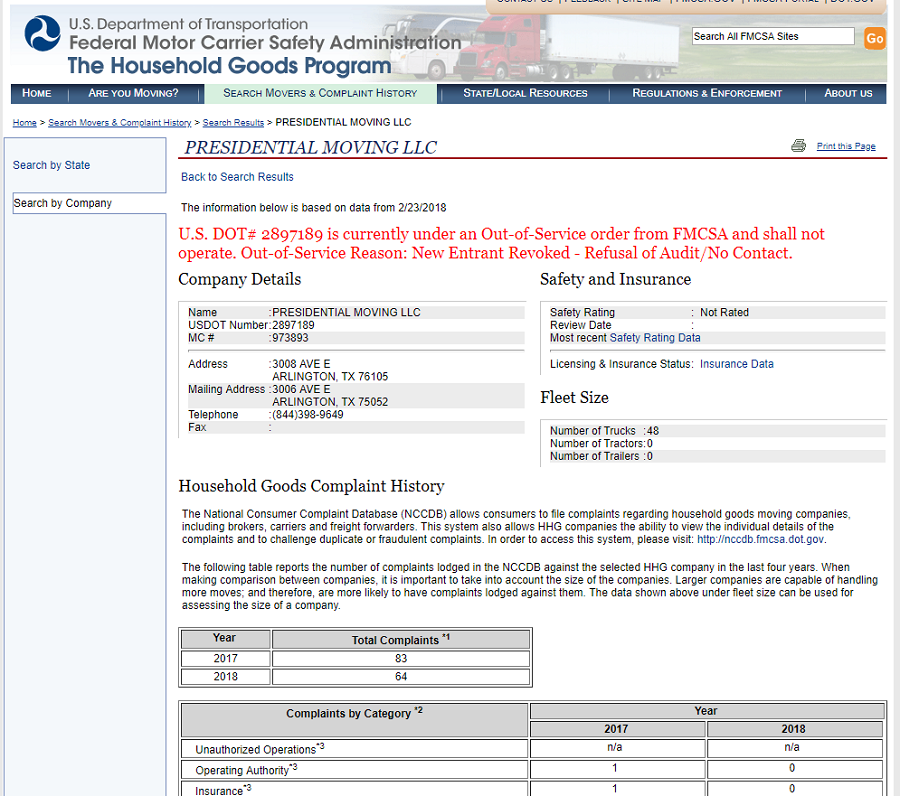 Nearly 150 complaints have been filed against the moving business. The FMCSA and Texas DMV launched a joint investigation into Presidential Moving LLC on October 17, 2017. The investigator, Amber Ott with the Texas DMV, reviewed 17 complaints including that the company was holding several shipments hostage.

The investigation also looked into whether the company was a reincarnation of nine other moving companies.

The investigator found, that in many instances, Presidential was acting as a broker and contracting out moves to other carriers who did not have authority to transport household goods. Customers also reported that Presidential demanded more money than the binding estimate.

Back in October, the investigator tried three times to visit Presidential's principal place of business, but no one was there. There was no company signage, mailbox, and an "available" sign was on the front door.

On October 31, investigators sat down with Andrey Shuklin and a woman who identified herself as Phyllis Ricci, however, she was not able to provide identification. Shuklin said he was the IT Coordinator and Ricci was manager of customer service for Presidential Moving LLC. Both had flown in from Florida. Shuklin told investigators the listed owner of the company, Sanjar Fayziyev, was out of the country.

Ricci told investigators that since Presidential started operations in August 2017, around 100 household good moves had been conducted. Of the 20 moves investigated, 10 were done by a broker but a written broker agreement did not exist. One of those moves was done by Public Moving Services, a company traced back to Shuklin through business filings. When asked about Public Moving Services, Shuklin could not answer who the company was or why it was booked by Presidential.

Over the course of the investigation, the FMCSA continued to receive complaints about the company.

Andrey Shuklin was identified as being affiliated and the owner of four other companies including JBR Underground LLC, National Relocation Systems LLC, and Public Moving Services.

ABC2 has also connected Shuklin to 15 other companies, some that are still active.

Public Moving Services also had its moving authority revoked due to the cancellation of the company's insurance, which is on file with the FMCSA. However, its website is still active.

The FMCSA concluded their investigation on December 6. The investigator recommended a safety audit and that enforcement actions be taken against Presidential Moving LLC.

Sharon Worthy, director of external affairs with the FMCSA, said she is unable to disclose whether any penalties are forthcoming. Currently, none are reflected on the FMCSA's website.

For consumers who haven't received their shipments, Worthy said they should file a complaint using the FMCSA's hotline 1-888-368-7238. Presidential is not authorized to transport interstate shipments.

Presidential Moving's website is also still active and does not reflect this information.

If you have a Matter for Mallory, you can email her at Mallory@wmar.com.