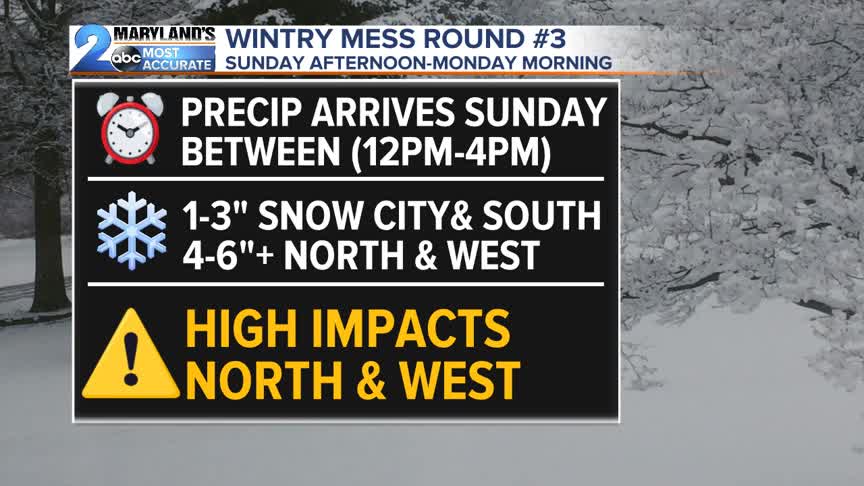 We had a bit of a preview Friday of what's to come winter weather wise Sunday with our morning snow and evening wintry mix. This past Friday's weather will be nothing compared to what we could be dealing with Sunday as a moisture rich system rolls our way. Snow, ice, and rain are all potential weather hazards but totals look to be in question based upon the track of storm system. Here is what we know right now based upon the current setup regarding timing, totals, and impacts.

A complex area of low pressure ejecting out of California gathers rich Gulf of Mexico moisture dukes it out with a blocking area of high pressure over Canada and an incoming cold front west to create this wintry mess. The high supplies a healthy wedge of cold air in which the precipitation overruns Sunday afternoon into early Monday morning giving us a classic winter storm set up. Questions remain to the the strength of this cold air pool which will be determined by the final track. A more "southerly" system gets the I-95 corridor involved in some big time wintry problems.

Best Case Scenario: The cold air pool is shallow and we get snow for a period of time at the onset before the warm air wins out transitioning everything over to rain. This would limit totals to a degree but with ample moisture we could still have a variety of winter weather woes combined with localized flooding since the ground remains saturated.

Worst Case Scenario: The cold air pool is deep and we get snow that transitions to ice as temperatures warm slowly. With a deeper cold pool dangerous wintry precipitation could hang around through the evening hours of Sunday into Monday morning leading to more "stickage" at the surface since sun angle would be non-effective here.

TIMING
As of now models push snow in from the south early Sunday afternoon (12PM-4PM) with intensity picking up between transitioning precipitation types into the evening hours. Snow will overspread all areas of Maryland with mixing south of US-50 as warm air wins out.

Cold air at the surface will likely be stubborn to erode from Baltimore points north toward the PA/MD State Line which will allow for an all snow event with a little sleet mixed in at times. I-95 from Baltimore and Havre de Grace south to Annapolis remains the dividing line for all precipitation types. The storm system departs pretty quickly Monday morning before sunrise ending as a little snow and sleet.

NORTHERN BALTIMORE, NORTHERN HARFORD, FREDERICK, CARROLL, & WASHINGTON COUNTIES (WINTER STORM WATCH 7AM SUNDAY-7AM MONDAY)
Snow moves in Sunday afternoon between (2pm-5pm). Light sleet/snow takes over from there before a change to heavy snow late Sunday evening. Road conditions are likely to be impacted fairly quickly as temperatures hover around 29-34 degrees during the duration of the event. Areas around South Mountain and along US-15 toward the Catochtins could see snow amounts around 6"+. US-340 toward Boonsboro/Brunswick and I-70 West Hancock/Sideling Hill likely to see 6-8"+ amounts as well due to extra lift from the mountains.

Slick travel is likely especially on elevated surfaces such as I-83 from the Hereford Zone north to Parkton. Problems are also likely to occur north of MD 136, MD 152, and the PA/MD line even with amounts there around 4-6".

BALTIMORE CITY, CECIL, KENT, CAROLINE, & HOWARD COUNTIES
Slippery roads are likely especially on elevated surfaces such as I-83, I-97, I-695, US- 301, and I-95 from Canton to Glen Burnie/Columbia. Problems are also likely to occur north of MD 29 and MD 32 back toward Mount Airy with amounts there around 4-6". Most areas like Towson, Hampden, Middle River, Essex, Columbia, Catonsville, Ellicott City, West Friendship, White Marsh, & Middle River are looking at 2-4" of snow with some localized spots topping 4". Mixing will also take hold for a period of time with even a change to rain since this will be the battle zone for the storm.

SOUTHERN BALTIMORE, ANNE ARUNDEL COUNTIES, & LOWER EASTERN SHORE POINTS SOUTH
Light snow to start Sunday with a Coating-2" expected before a changeover to mix and all rain. Rain will be heavy at times through the overnight into early Monday morning. A brief period of slick travel is likely along I-95 SB, I-295, I-97 SB, US-50, and US-301. Everyone south of US-50 just looking at plain rain.

ALLEGANY & GARRETT COUNTIES, I-68 WEST
Snow amounts upwards of 6-8"+ likely. Those areas above 2,000 ft such as Cumberland, Frostburg, Keysers Ridge, Big Savage Mountain and Oakland could see the snow amounts closer to 8"+.Snow covered roads and dangerous travel concerns as temperatures hang out around 26-30 degrees.

Stay tuned to the forecast in the coming days for fine tuning on time, totals, and overall impacts. Keep checking back in on our free WMAR2News mobile app, online, on the air, and on Facebook and Twitter for the latest updates.