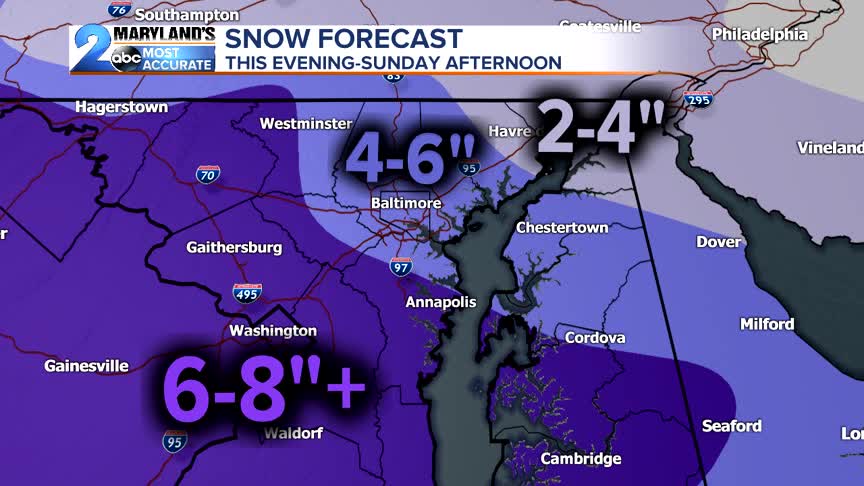 Snow totals have increased as our storm moves further north and slows down.

Winter Weather Advisories and Warnings have been posted for much of Maryland from Saturday afternoon through Sunday afternoon. Tis' the season for cold and snow as the significant snowfall of 2019 moves into the area. Heaviest window for snow looks to be between 10pm Saturday to 10 am Sunday.

A "Southern Sliding system looks to storm our way early Saturday afternoon and does not look to depart until Sunday midday. The main precipitation type looks to be fluffy snow with a little mixing at the coast. Here's a breakdown of what you need to know.

Wintry weather starts to move into the Baltimore metro and surrounding suburbs early Saturday afternoon (12-2pm). Most locations will start as light snow before a transitions over to moderate and heavy snow during the overnight hours (10pm Saturday-10am Sunday) . Placement of the storm system and storm speed will be important to how much snow we do see.

Here is a quick look at one of our short term models (European) regarding the onset of the wintry precipitation Saturday morning.

Snow totals with this storm look to be fairly uniform across the area with the exception of Harford and Cecil Counties where lesser amounts are expected. The reason for this is the fact that the storm center will be south of the area. So the farther south you go the better chance that you see heavier accumulations.

As of now Southern Maryland and the Lower Eastern Shore are likely to see the highest accumulations. Mixing is also likely to occur as warmer air tries to surge in. This is where Winter Storm Warning are now in place and where the worst road conditions should be late Saturday into Sunday.

Either plan accordingly for slick travel. Anything that does fall will stick on contact since the road surfaces are cold. Don't crowd the plows and don't travel if you have to during the peak of the storm. Road conditions should improve fast by Monday although slick spots will remain.

Snow moves by 3-5pm Saturday. Road conditions are likely to be impacted with school delays possible Monday. Temperatures hover around 28-32 degrees during the duration of the event. Areas around South Mountain and along US-15 toward the Catochtins could see amounts around 8". US-340 toward Boonsboro/Brunswick and I-70 West Hancock/Sideling Hill likely to see 6-8" amounts as well due to extra lift from the mountains.

Snow moves in by 4-6pm with a gradual transition to moderate snow late Saturday night. Slippery roads are likely especially on elevated surfaces such as I-83 from the City north to Parkton. Problems are also likely to occur north of MD 136, MD 152, and the PA/MD line even with amounts there around 4-6". Most areas like Towson, Eldersburg. Taneytown, Monkton, Cockeysville, White Marsh, & Middle River are looking at 5-7" of snow. This will be a fluffy snow and easy to cleanup with a shovel or broom.

Snow moves in between 5-8pm with a transition to heavy snow after 10pm Saturday. Tricky travel concerns with plow-able snow likely. Biggest issues should be along US-301 and US-50 as well as 295 South toward Washington. 5-8" of snow for Annapolis and Columbia as well as Chestertown, Stevensville, and Kent Island. Closer to 7-9" Easton and points south of there with locally heavier pockets.

Storm system departs pretty quickly Sunday night leaving in it's wake bitterly cold air. Overnight lows in the teens with wind chill factors back in the single digits. Black ice is also a concern as we head into the day Monday.

Right now the confidence remains moderate-high in this forecast. How far north does the snow shield make it and how much dry air gets in here will be the big difference makers into what we actually see across the area. As of now prepare for a minor mess with some travel delays across the area. Confidence is high for a significant winter event where Winter Storm Warnings are now in place. This includes much of Southern MD and northern sections of Virginia along the I-66 Corridor.