Dusting to 1" of snow expected with some school.. 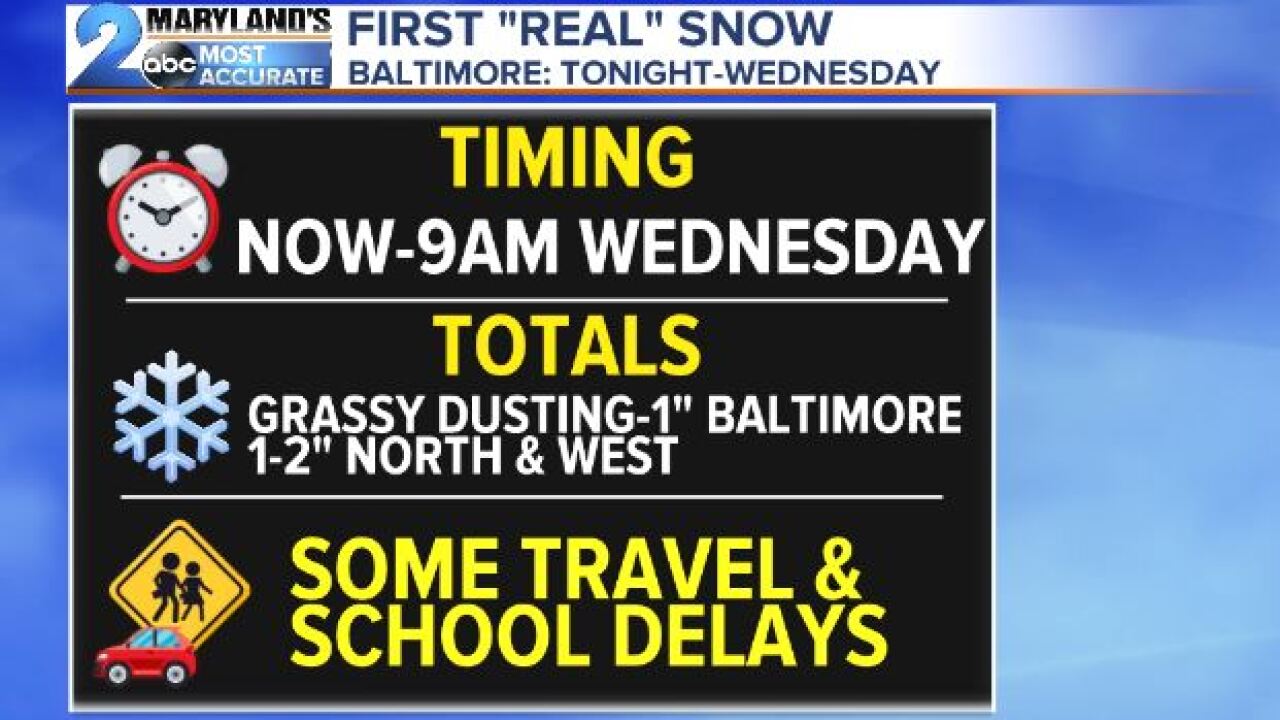 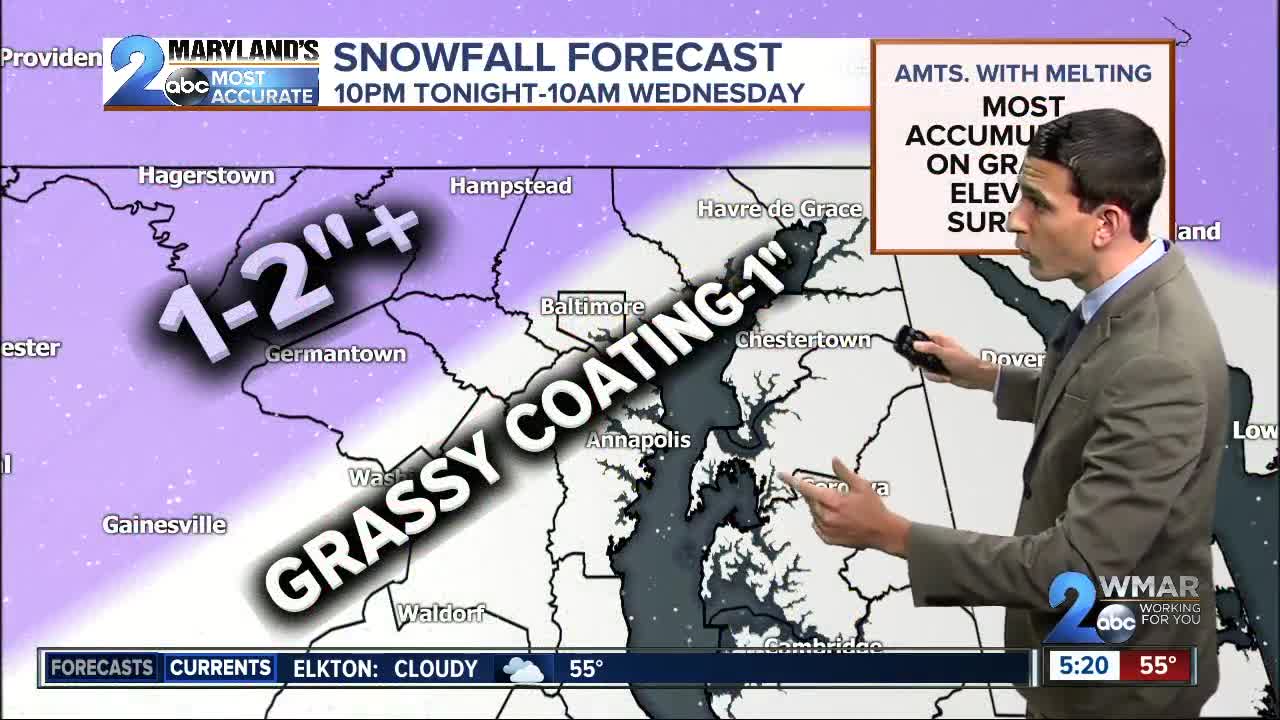 Winter Weather Advisories have been issued for areas north and west of Baltimore from 2am-8am Wednesday morning. A quick moving front and an area of low pressure out ahead of the boundary will provide us with good lift for wintry precipitation moving into the area.

TIMING
Model consensus suggest the wintry weather moving in 10pm Tuesday-8am Wednesday morning from the south and west. Temperatures at this time will sit at or slightly below freezing making for an rain to snow situation. As it stands now the morning rush will be a little slick especially the further north and west of the city where temperatures are a bit colder.

Snow intensity is at it's heaviest Wednesday between 2-6am before things start to wrap up after 8am. Once again a minor mess for those living north of I-70 and the I-695 Corridor while everyone else south of Baltimore deals with some slushy slop on the grassy surfaces Wednesday morning. Skies will clear as the morning rolls on with high temperatures struggling to make 40 degrees.

Snow totals with this storm are a bit of a challenge with this system based upon the quickness of front, temperatures, and moisture availability . Areas such as Carroll, northern Baltimore, northern Harford, and Frederick counties will see the heaviest amounts of snow with localized spots of 2". Further south in Baltimore and along the I-95 Corridor, a grassy dusting of snow is likely after the changeover from sleet and rain. Some minor travel concerns can be expected along MD 30, MD 136, I-83 NB from the Hereford Zone, and along MD 23. Most locations though will get a way with wet roads thanks to road temperatures sitting above freezing during the duration of the event.

Plan accordingly for slick travel concerns as anything that is snow will stick immediately especially on those elevated surfaces. Road conditions should improve pretty quickly by mid to late morning once the precipitation starts to taper.

Snow moves in Sunday afternoon between (Now-12am). Light sleet/snow takes over from there before a change to moderate snow early Wednesday morning. Road conditions are likely to be impacted somewhat as temperatures hover around 29-34 degrees during the duration of the event. Areas around South Mountain and along US-15 toward the Catochtins could see snow amounts around 2". US-340 toward Boonsboro/Brunswick and I-70 West Hancock/Sideling Hill likely to see 1" amounts as well due to extra lift from the mountains.

Slick travel is likely especially on elevated surfaces such as I-83 from the Hereford Zone north to Parkton. Problems are also likely to occur north of MD 136, MD 152, and the PA/MD line even with amounts there around 1".

Slippery roads are possible especially on elevated surfaces such as I-83, I-97, I-695, US- 301, and I-95 from Canton to Glen Burnie/Columbia. Problems are also likely to occur north of MD 29 and MD 32 back toward Mount Airy with amounts there around 1". Most areas like Towson, Hampden, Middle River, Essex, Columbia, Catonsville, Ellicott City, West Friendship, White Marsh, & Middle River are looking at a grassy dusting of snow with some localized spots pushing 1". Temperatures just won't work in our favor to get stickage.

Light snow to start Sunday with a Coating-2" expected before a changeover to mix and all rain. Rain will be heavy at times through the overnight into early Monday morning. A brief period of slick travel is likely along I-95 SB, I-295, I-97 SB, US-50, and US-301. Everyone south of US-50 just looking at plain rain.

Snow amounts upwards of Coating-1"+ likely. Those areas above 2,000 ft such as Cumberland, Frostburg, Keysers Ridge, Big Savage Mountain and Oakland could see the snow amounts closer to 1". Most of these areas have already seen the snow as the front and main energy have passed on by limiting snow amounts.

COLD BEFORE ANOTHER WARM UP

Our storm system departs pretty quickly Wednesday leaving in it's wake highs in the 30s. The cold will last for the Ravens game as well with temps around 30 degrees for kickoff Thursday night. Fall like numbers return for the weekend with highs in the 50s and more rain.