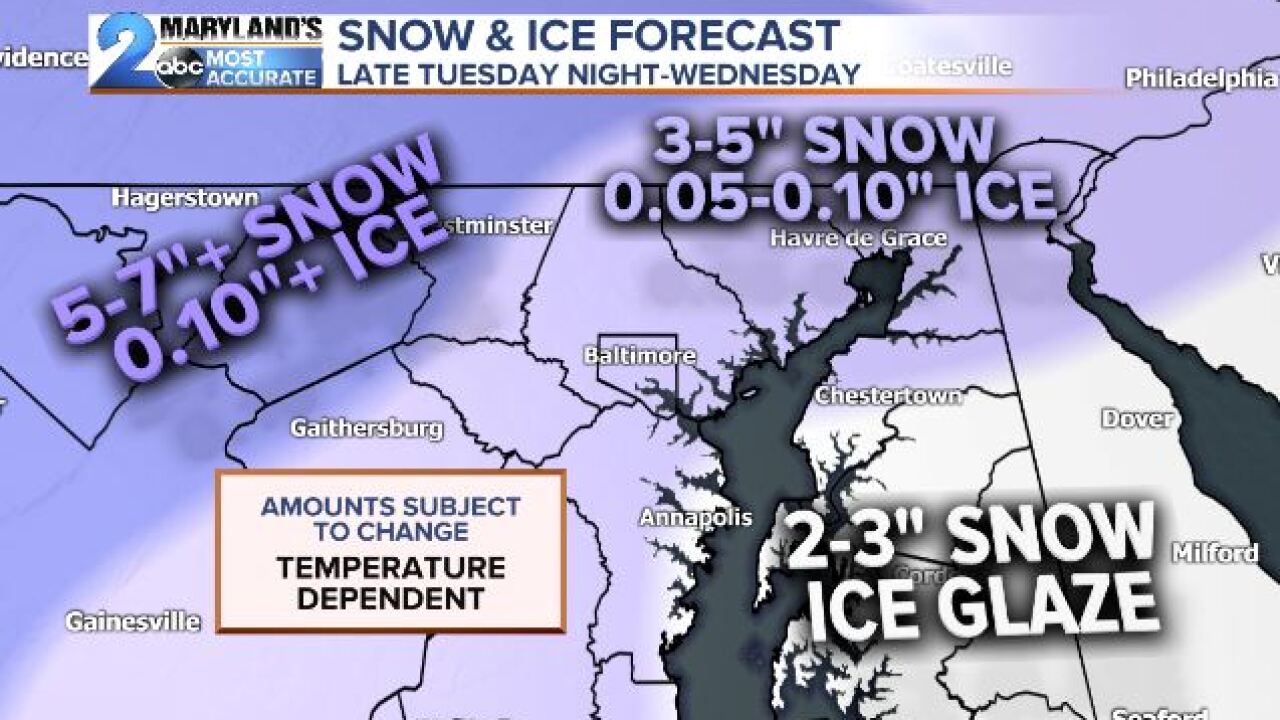 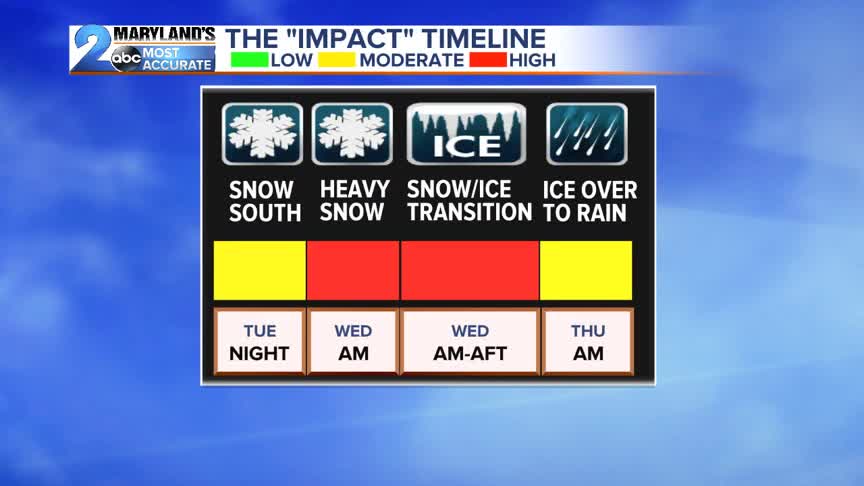 Once again it's another wintry mess for Central Maryland this week. Winter Storm Watches have been issued for most of Maryland from 10pm Tuesday night through 10pm Wednesday night. A potent area of low pressure riding along the "Southern Branch" of the jetstream will head our way from the south overrunning cold air produced by a blocking high pressure system to the north. The combination of the two equal the perfect ingredients for a classic winter storm.

Model consensus suggest the wintry weather moving in around 5-6am Wednesday morning from the south and continuing all day long. Temperatures at this time will sit at or slightly below freezing making for an all snow situation. As it stands now the morning rush will be slick especially the further north and west of the city where temperatures are a bit colder.

Snow intensity picks up as the Wednesday morning rush rolls on and even into Wednesday mid afternoon. The heavy snow window ranges from (9am-2pm) Wednesday according to the latest models before a slow transition over to sleet and freezing rain. As warm air wins out aloft the mixed precipitation picks up in intensity between 3pm-10pm Wednesday before temperatures slowly warm by early Thursday morning as the system departs. This will be a HIGH impact event for travel since ICING looks to be a big time concern. Even out along the Eastern Shore from US-50 to US-301 slippery travel conditions are likely at the onset before the changeover to ice and eventually rain.

Snow totals with this storm are a bit of a challenge with this system based upon temperatures and mixing which creates compaction . Areas such as Carroll, northern Baltimore, northern Harford, and Frederick counties will see the heaviest amounts of snow with localized spots of 5"+. Further south in Baltimore and along the I-95 Corridor, 3-5" of snow is likely before the changeover to sleet and freezing rain. Tricky travel will be widespread due to the intensity of the precipitation keeping crews on their heels to keep.

Plan accordingly for dangerous travel concerns as anything that is snow/liquid will freeze immediately especially on those elevated surfaces. Road conditions won't improve much until we get to late Wednesday night with temperatures climbing back above 32 degrees.

Snow moves in Wednesday morning between (6am-9am). Heavy snow takes over from there mixing with sleet from 9am through 2pm Wednesday. Road conditions are likely to be impacted fairly quickly as temperatures hover around 27-32 degrees during the duration of the event. Areas around South Mountain and along US-15 toward the Catochtins could see snow amounts around 5"+. US-340 toward Boonsboro/Brunswick and I-70 West Hancock/Sideling Hill likely to see 5-7"+ amounts as well due to extra lift from the mountains. A heavy glaze of ice is also possible with ice amounts of 0.20"+ Wednesday afternoon-evening. Significant travel troubles and power outages are a concern.

Slick travel is likely especially on elevated surfaces such as I-83 from the City north to Parkton. Problems are also likely to occur north of MD 136, MD 152, and the PA/MD line even with amounts there around 3-5".

Slippery roads are likely especially on elevated surfaces such as I-83, I-97, I-695, US- 301, and I-95 from Canton to Glen Burnie/Columbia. Problems are also likely to occur north of MD 29 and MD 32 back toward Mount Airy with amounts there around 4-6". Most areas like Towson, Hampden, Middle River, Essex, Columbia, Catonsville, Ellicott City, West Friendship, White Marsh, & Middle River are looking at 3-5" of snow. A light glaze of ice is also expected in these areas creating additional travel and power troubles.

Precipitation will start as snow before changing to freezing rain/sleet Wednesday mid afternoon. Heavy snow will last through Wednesday morning rush with 1-3" expected. The changeover to all rain occurs during the afternoon Wednesday and carries into Thursday morning as temperatures sit 33-37 degrees. Slick travel is likely on US-50 and I-295 south with a light glaze of ice expected here too.

WARM UP COMING
Our storm system departs pretty quickly Thursday leaving in it's wake 50+ degree temperatures. A taste of Spring is even on the way with highs by Sunday back in the low 60s with rain.