A stormy pattern with flooding and wind.... 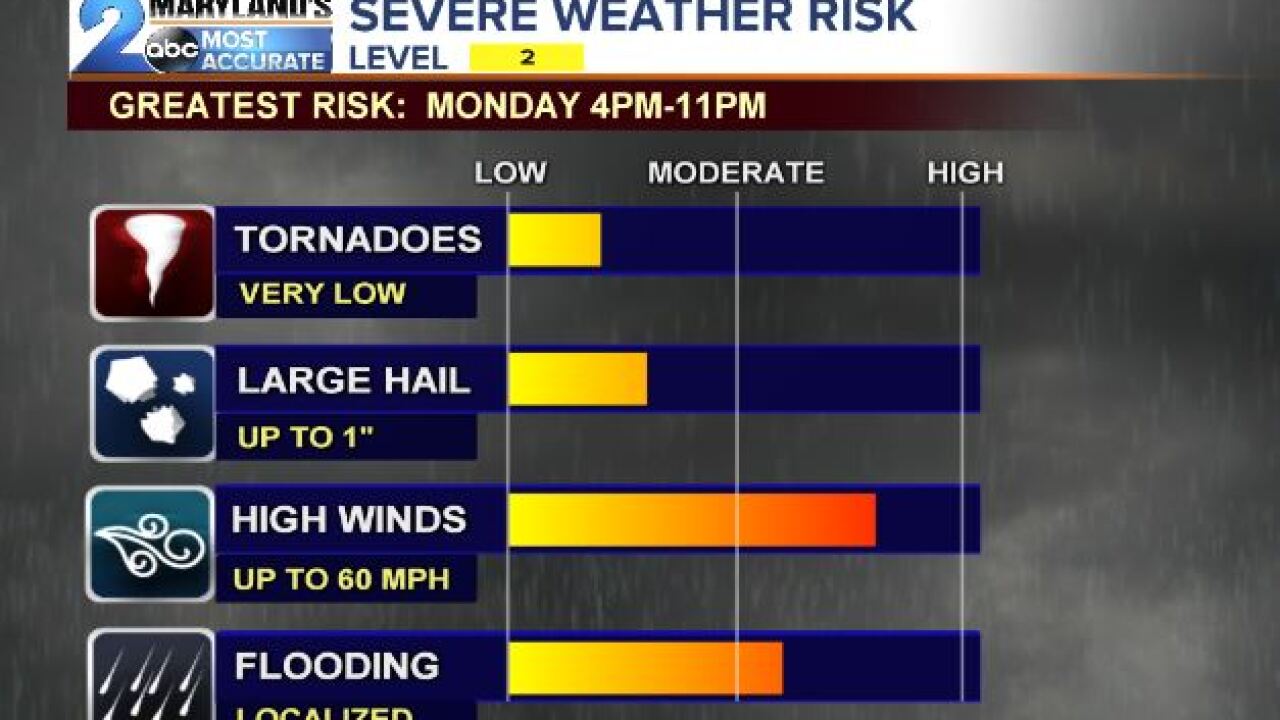 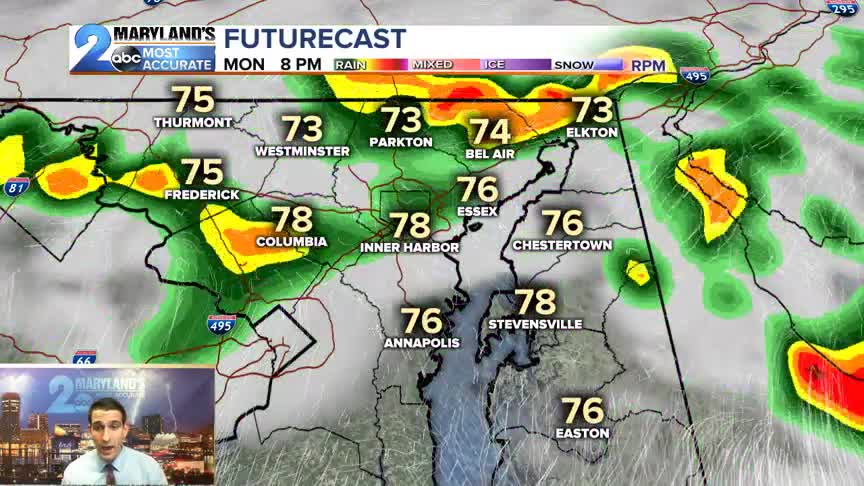 The threat for severe weather returns once again to Central Maryland for your Monday and Tuesday. Multiple rounds of storms are expected as a stationary frontal boundary sits over the area. For that reason the Storm Prediction Center in Norman, Oklahoma has placed all of the area underneath a "LEVEL 2 Slight Risk" for severe weather with a "LEVEL 1 Marginal Risk" Tuesday. These risks simply mean that conditions look to be favorable for severe weather development especially during the afternoon and evening hours. Primary threats with any of these storms look to be damaging winds, large hail, localized flooding, and vivid lightning concerns. An isolated tornado also cannot be ruled out based upon recent trends with severe weather activity over the last few days.

Two limiting factors though could be the placement of the boundary and residual cloud cover that remains in place. If the clouds break like the models are expecting storm energy will build since temps could punch close to 90 degrees. With added heat, humidity, and a lifting mechanism of course you have the perfect breeding ground for storms. The hope is the morning cloud cover and any leftover shower activity could mitigate the threat especially with the main energy source just to our west.

After 3-4pm is when things look to get cooking just to our north and west with storms. Thunderstorms will bubble up from residual convection and boundaries leftover from Sunday. This convection will be scattered in nature while at the same time advancing south into the late afternoon and evening hours. The worst of the weather looks to get into northern Maryland after 5-6pm and continue through at least 9pm Monday night.

The activity looks to lull during the overnight into Tuesday with a shower by early morning. Tuesday though will feature much of the same with showers and storms once again bubbling up during the afternoon and evening hours. Timing looks to be similar as the front remains stalled across the area.

THREATS
Our primary concerns look to be damaging winds in excess of 60 mph and large hail. Heavy rain is also likely leading to flash flooding concerns since storms look to train over some of the same locations. Models trend the line to come through during the peak heating of the day which could increase the threats since the storm energy and wind energy aloft will likely be maximized. Storm coverage though looks to be scattered to widespread in nature leaving everyone to remain on guard with a way to get warnings.

Besides wind and hail threat the concern for a tornado or two remains on the table. The threat is nonzero based upon the winds aloft and at the surface moving in slightly different directions to create rotation. This is especially true with storms that are closer to the stationary frontal boundary.

Wind and flash flooding though continue to be the biggest concern since above us at airplane level winds are well over 40-50mph and moisture at the surface looks to continue to increase south of the boundary. Any storm that is likely to form could pull down those gusty winds to the surface along with increased rainfall rates up to 1"/hour.

IMPORTANT
Please make sure to have a way to get watches and warnings Monday-Tuesday. Make sure to have a severe weather safety plan and know where you live on a map so you can get the right information even faster.