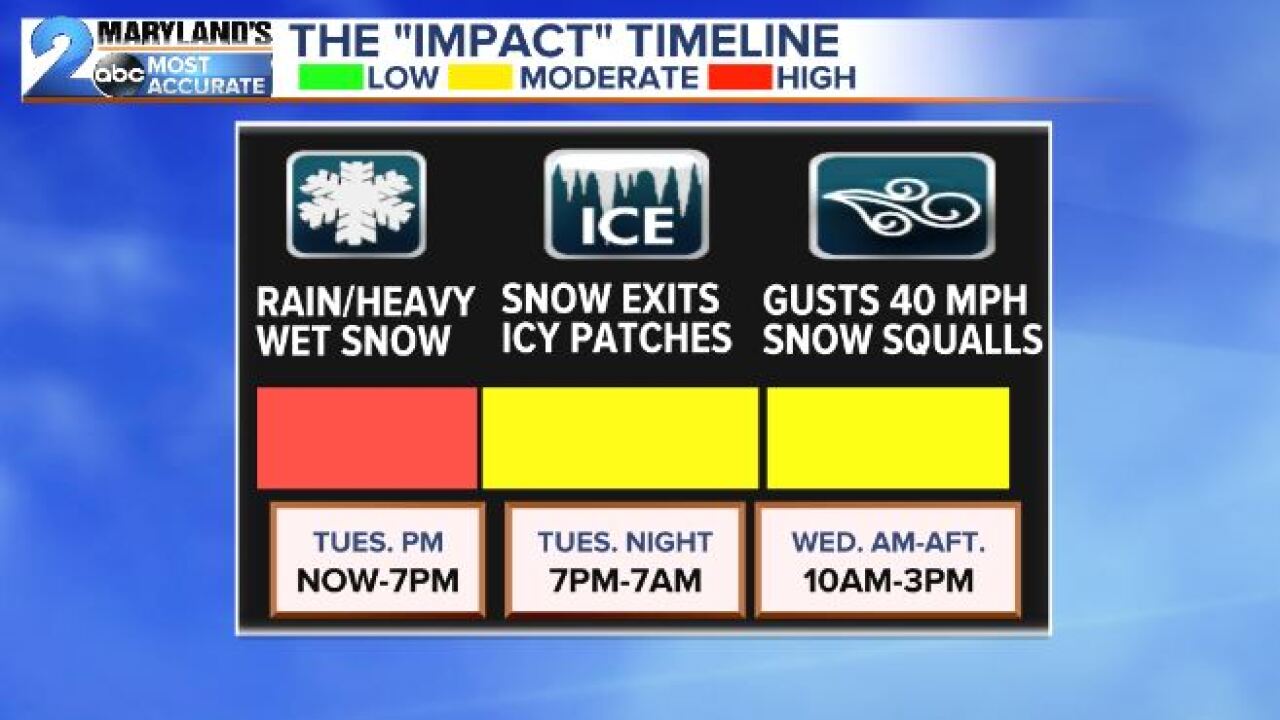 Our first real wintry mess of the season has arrived in Central Maryland and looks to continue into the early evening commute home. This storm system will bring a variety of precipitation troubles from snow to rain and even some minor icing concerns across portions of the area at the onset of the event.

Winter Weather Advisories are in place for every county across our area with the exception of Queen Anne's and Kent counties through early Tuesday evening for the potential of slick travel due to snow. Snowfall rates look to be at 1-1.5" per hour creating havoc on the evening commute home.

TIMING:
From now through 8pm looks to be the worst of the weather. Rain and sleet will transition over to heavy wet snow as the evaportaive cooling process takes over. Temperatures will hover at or slightly above freezing in most locations with the exception of the far northern and western suburbs of Baltimore Tuesday evening.

These are the areas that are likely to see the highest of impacts especially on those untreated surfaces. Snow comes to an end after 8pm tonight with skies slowly clearing. Lows will fall back to around 30 degrees with winds out of the west northwest gusting to 20 mph early Wednesday morning. Winds will get stronger throughout the day with additional snow flurries and squalls between 10am-2pm Wednesday. A quick dusting cannot be ruled out by these localized bands as they drop through the area.

POTENTIAL SNOWFALL TOTALS
Here is where the word "complex" plays into the forecast. A variety of precipitation and temperatures above 32 degrees make totals hard to pin down. Our best guess suggest that much of the area will see a quick coating-1" of snow before the system departs around 8pm. Our northern counties such as Frederick, Carroll, northern Baltimore, Washington, and northern Harford could receive 1-2" with localized pockets of 3". Roads could be slick despite the road temps being above freeing thanks to the heavy snowfall rates under the most intense bands. Even with that said salt should be effective here because the actual snowfall ratio is very wet instead of fluffy.

Western Maryland is already finishing up with the snow. Most locations from Cumberland to Oakland picked up a good 2-5" of snow. I-68, US-219, and I-70 still remain slick in spots but road conditions look to improve vastly as the evening rolls on. These areas could pick up additional snow accumulation come Wednesday afternoon as snow squalls and upslope snow showers move through.

In the Baltimore metro area and Eastern Shore this is mostly a rain and sloppy slushy type of evening. Most locations in and along I-95 will see a coating-1" of snow with spots like Catonsville, Pimlico, and Druid Hill, and Columbia picking up at least an inch. The higher you are in elevation the better chance you have getting close to 1-2" of snow. Snow exits these areas after 8pm with some leftover icy patches overnight. Snow squall activity will also be an issue here on Wednesday too so prepare accordingly.

HATE WINTER HOW ABOUT SPRING!!!
If you hate all this snow and cold just wait a few days. High temperatures will climb back into the 50s Friday and eventually head toward 70 degrees by the weekend. Right now the Ravens game looks west but at least it's nice and mild. It wouldn't be a Maryland winter without all the twist and turns.