Our relief from the humidity comes at a cost.. 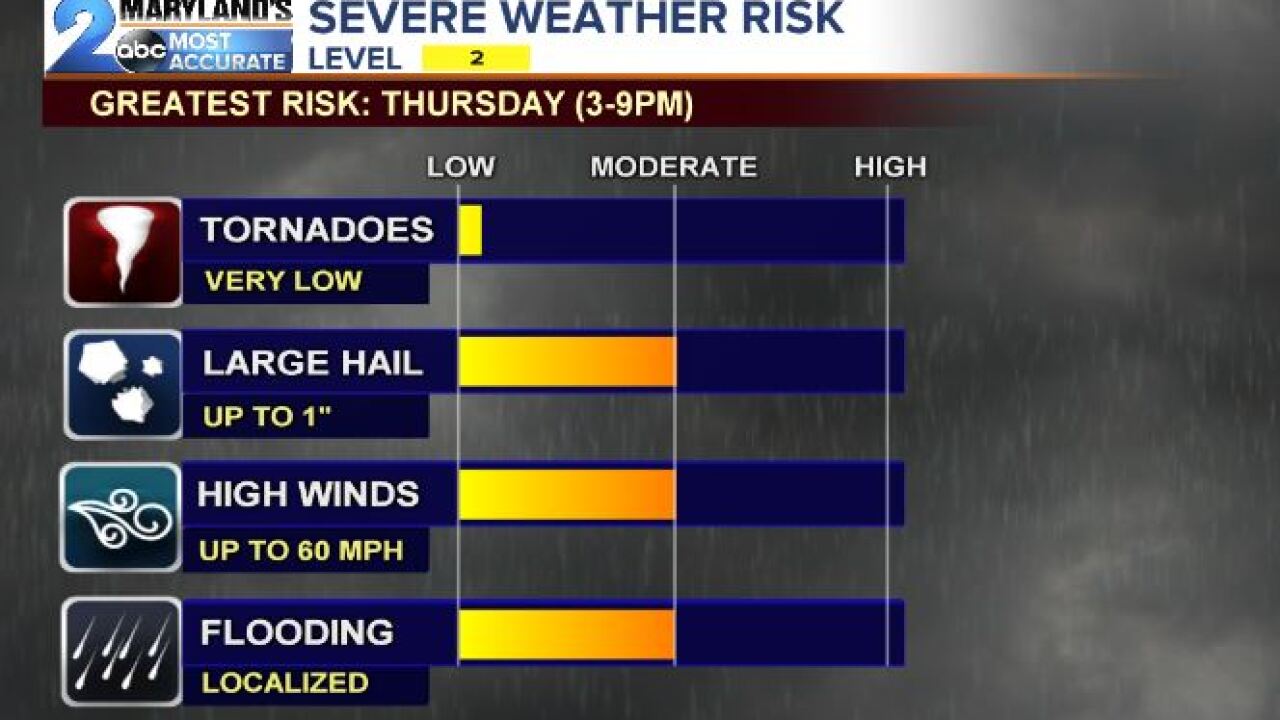 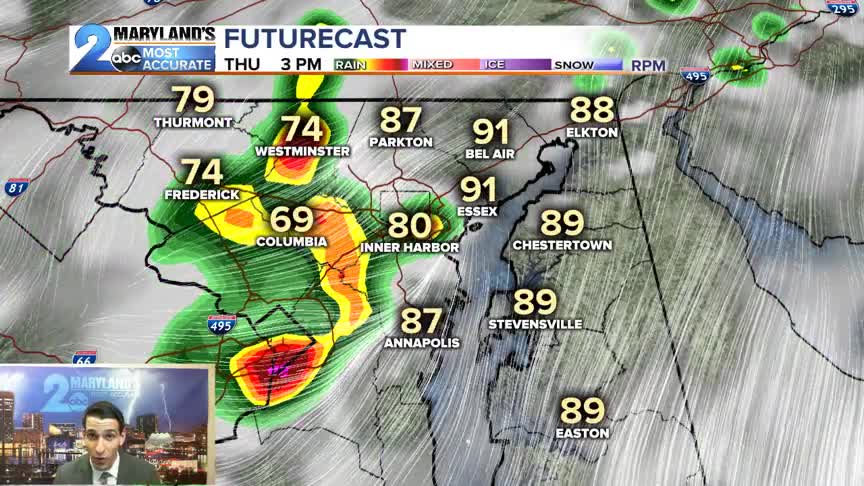 BALTIMORE — Another round of severe weather unfortunately is on it's way to Central Maryland. This will be the last of our stormy troubles and end to the humidity across the area for the end of the workweek. Activity should be relatively scattered with areas from Baltimore points south seeing most of the action. Storms look to strike the area Thursday afternoon and early evening with damaging winds, large hail, heavy rain, and vivid lightning concerns. An isolated tornado also can't be ruled out as the front pushes in from the west.

The storm system continues to strike the Southern Plains and northern Ohio River Valley, giving them another round of dangerous weather. Right now a "LEVEL 2 SLIGHT RISK" for severe weather is in place for damaging winds, hail, and flash flooding in those areas with the threat continuing until Thursday.

Meanwhile here in Baltimore we will see scattered storms this evening before things get worse Thursday afternoon as the heat and humidity build. A few breaks of sunshine with temperatures pushing into the low 90s making things even more interesting when it comes to our severe weather threat. Two limiting factors though could be the clouds in the morning and the exact timing of the energy as it comes along the boundary late Thursday afternoon.

After lunchtime Thursday is when things look to get cooking. Showers and thunderstorms will bubble up from convection earlier in the day off to our west. At the same time a broken line of storms will be rolling out of the mountains of Maryland during the late afternoon hours . This line should arrive to Baltimore after 3pm before crossing into the Eastern Shore after the late evening rush. This is where we could see the worst of the weather when it comes to damaging winds and even some large hail.

THREATS & IMPACTS
Our primary concerns look to be damaging winds in excess of 50 mph and large hail. Heavy rain is also possible but flooding does not look to be an issue since storms will be moving by pretty quickly. Models trend the line to come through a little quicker which could increase the threat since the storm energy and wind energy aloft will likely be maximized at this point. Storm coverage though looks spotty in nature with some locations not seeing anything at all.

Besides wind and hail threat the concern for a tornado or two remains on the table. The threat is nonzero based upon the winds aloft and at the surface moving in slightly different directions to create rotation. This is especially true with storms that are closer to the warm frontal boundary.

Wind though continues to be the biggest concern since above us at airplane level winds are well over 40-50mph and at the surface gusts look to approach 30mph out ahead and behind the main line of storms. The same main line of storms at any point could pull down those 40-50 mph winds to the surface creating spotty instances of tree damage and even some power outages.