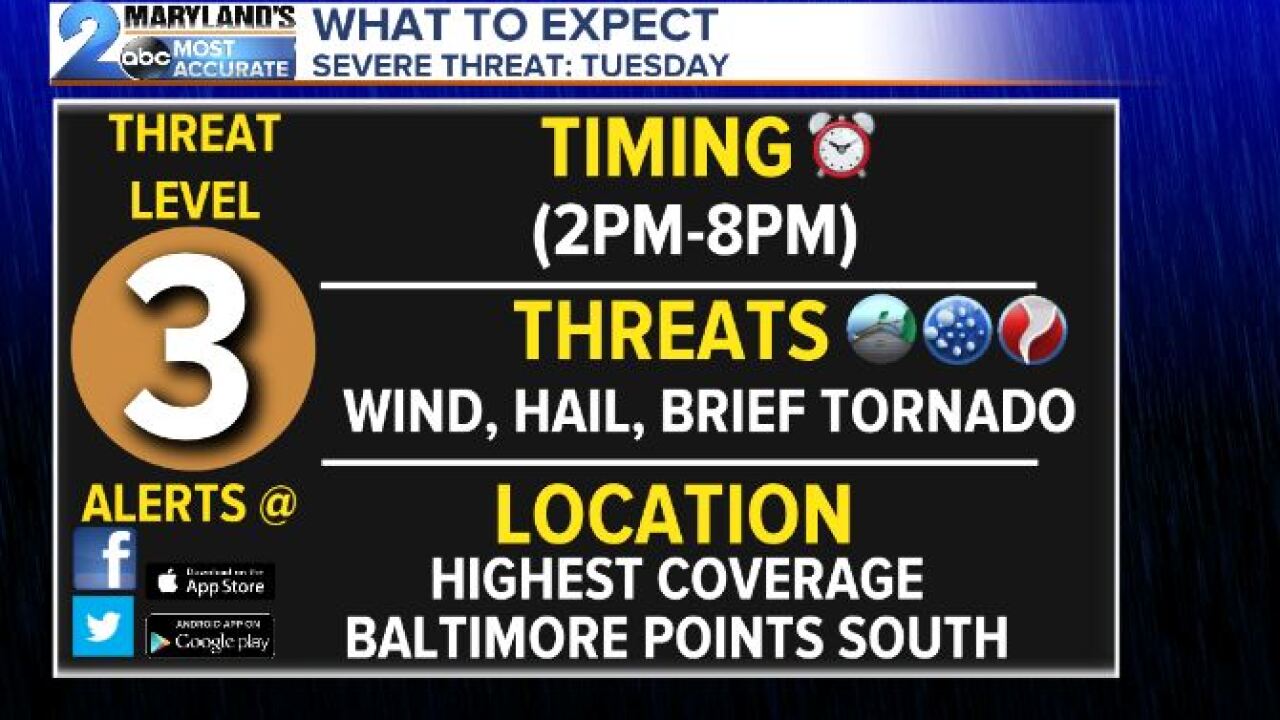 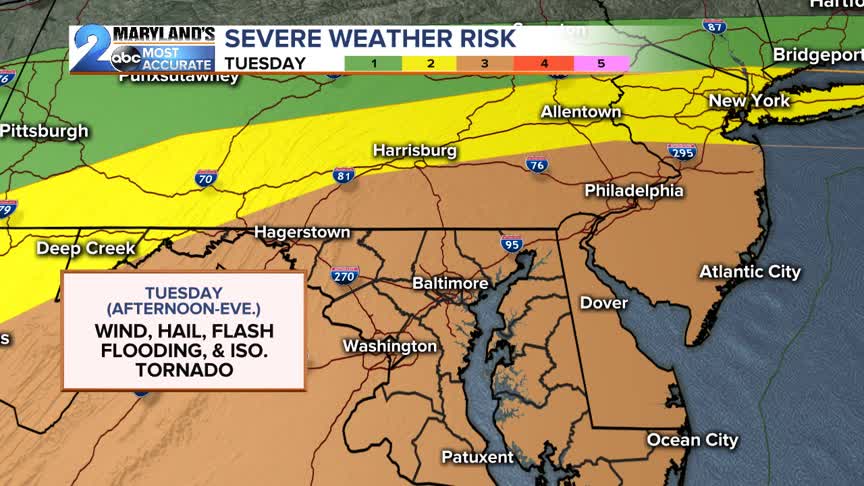 After a nearly perfect weekend in Baltimore the threat for severe weather returns to the forecast Tuesday. A potent line of strong storms is expected to push toward the area late Tuesday morning into Tuesday after as a shortwave piece of energy ejects out of the Ohio River Valley. This energy will be apart of a cold frontal boundary which looks to drop south Wednesday and then stall for continued storm chances into the end of the workweek. For that reason the Storm Prediction Center in Norman, Oklahoma has placed most of the area underneath a "LEVEL 3 Enhanced Risk" for severe weather with a "LEVEL 2 Slight Risk" over parts of the Western Maryland mountains. These risks simply mean that conditions look to be favorable for severe weather development especially during the mid afternoon and early evening hours. Primary threats with any of these storms look to be damaging winds, large hail, localized flash flooding, and even the concern for a brief tornado.

Two limiting factors though could be the timing of the energy and any increased cloud cover from showers that look to initiate across portions of the area during the morning hours. If the clouds are limited like the models are expecting the storm energy will build since temps could punch close to 90 degrees. With added heat, humidity, and a lifting mechanism of course you have the perfect breeding ground for storms. The hope is the morning cloud cover and any early shower activity could mitigate the threat especially with the main energy source modeled to stay south of the area.

TIMING & IMPACTS
Storm activity looks to start late morning in the mountains of Maryland before advancing east toward Baltimore. Out ahead of this activity we look to see excess cloud cover and scattered showers which could mitigate the threat. Most of the cloud cover will be from the actual complex of storms as it dives into West Virginia with the northern edge coming up and over the Maryland mountains. As the complex dives south residual boundaries will push off it initiating more storms out ahead and to the north and south. With the front coming in from the west any residual boundary is aided to fire off storms especially with heat, humidity, and wind energy built up aloft. Right now the prime-time period looks to be between 1-8pm for the heaviest showers and storms.

This convection will be scattered in nature while at the same time advancing east into the late afternoon and evening hours. The worst of the weather Baltimore by the evening rush hour commute home (3-6pm) followed up by the Eastern Shore. As of now the highest concern for severe weather or target point would be from Baltimore City south toward Annapolis and across southern Maryland (3-6pm).

All of the activity looks to clear the area after 8-10pm with mostly cloudy skies leftover as we head into Wednesday. Additional showers and storms are expected midweek as another area of low pressure rolls through the area although severity looks to be reduced.

THREATS
Our primary concerns look to be damaging winds in excess of 60 mph and large hail. Heavy rain is also likely leading to flash flooding concerns since the humidity values are juiced back up and rainfall rates could easily eclipse 1"/hr with the strong updrafts on any of the storms. Models trend the line to come through during the peak heating of the day which could increase the threats since the storm energy and wind energy aloft will likely be maximized. Storm coverage though looks to be scattered to widespread in nature leaving everyone to remain on guard with a way to get warning.

A tornado also cannot be ruled out based upon the wind energy aloft and the turning of the wind at the surface as low pressure moves through. This threat is low and not non zero so please have a way to get warnings Tuesday afternoon and evening. Wind will be the predominant threat but whether it's a Severe Thunderstorm Warning or Tornado Warning these storms will be dangerous so seek shelter immediately when these alerts are issued for your area.