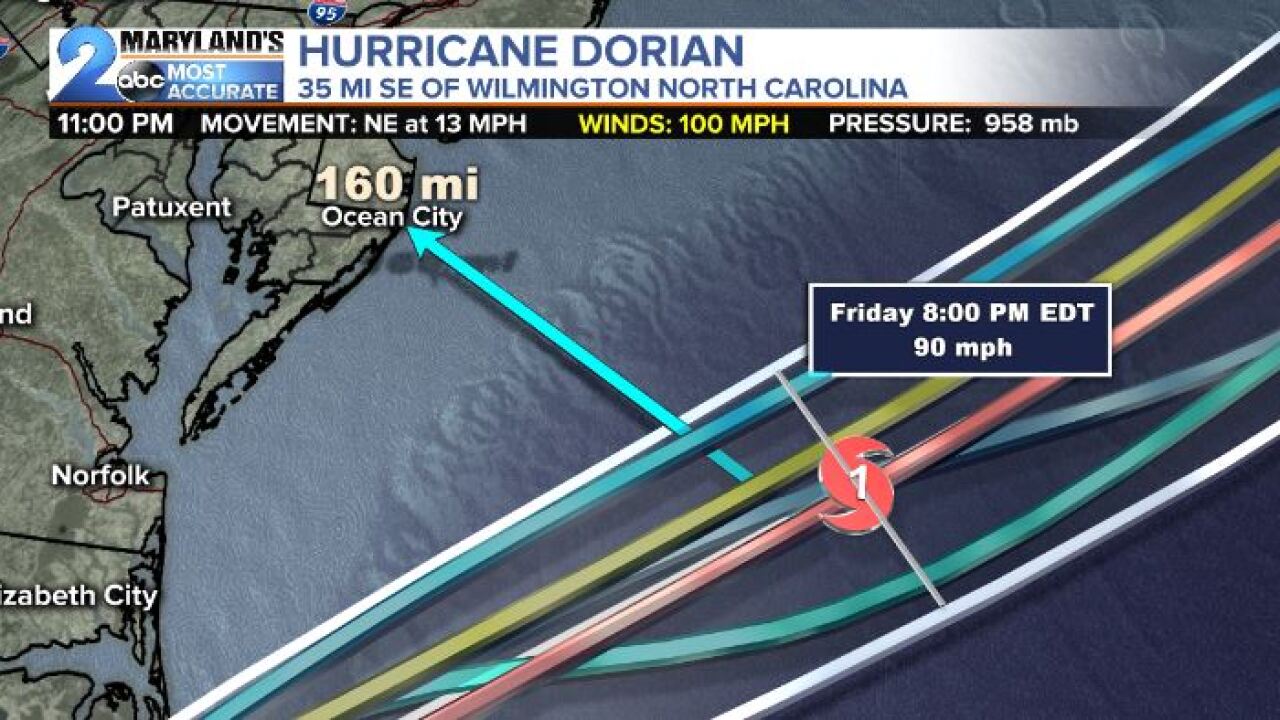 Hurricane Dorian as of the 11pm advisory continues to lose it's intensity as it slowly churns up the Carolina coast. This interaction with land has dropped the wind speeds somewhat but still the storm looks formidable Storm surge flooding, heavy rainfall, and isolated tornadoes remain the main concern as the storm crosses over the Outer Banks.

Landfall still looks to be a Cape Lookout or Cape Hatteras overnight putting the storm about a 150 miles offshore of Ocean City, Maryland Friday late morning into the afternoon.

Tropical Storm Warnings are now up for Southern Maryland Friday as the storm passes by. As it stands now with Dorian weakening a bit the core of strongest winds should remain offshore. Gusts of 30-50 mph are likely with 50-60 mph gusts right along the coast in Ocean City or even 10-20 miles offshore.

With the wind comes the concern for flooding in form of storm surge. Storm surge values look to between 1-3 feet with the onshore flow on the front half of the storm during the morning and early afternoon hours. The best shot of this would be during the high tide cycle at 3;12 pm in Ocean City where water heights of 2.71 ft are expected.

Extra water could also be driven up the Chesapeake into the lower Eastern Shore enhancing some minor bay flooding before draining back out Friday night into Saturday as the storm dissipates. Rainfall amounts will not be all that impressive here with many locations receiving less than an inch.

A sharp cutoff in tropical conditions are likely between Baltimore/Annapolis over to the Eastern Shore. Most activity once again will be confined to Southern Maryland and the beaches where the stationary boundary and an area of low pressure guide Dorian out to sea just in time for the weekend.

Speaking of the weekend a little bay flooding cannot be ruled out of Saturday as the wind direction changes to the northeast then northwest as the storm departs. Sunshine will be back on both with highs around 80 degrees. We will also lose the wind as well.

Next shot of rain arrives early next week but at least that will be scattered and not tropical related. Long range continues to show normal precipitation values and above average temperatures as we countdown the final weeks of Summer.