BOMB CYCLONE: What is Bombogenesis?

Breaking down the mean of the "Bomb Cyclone" 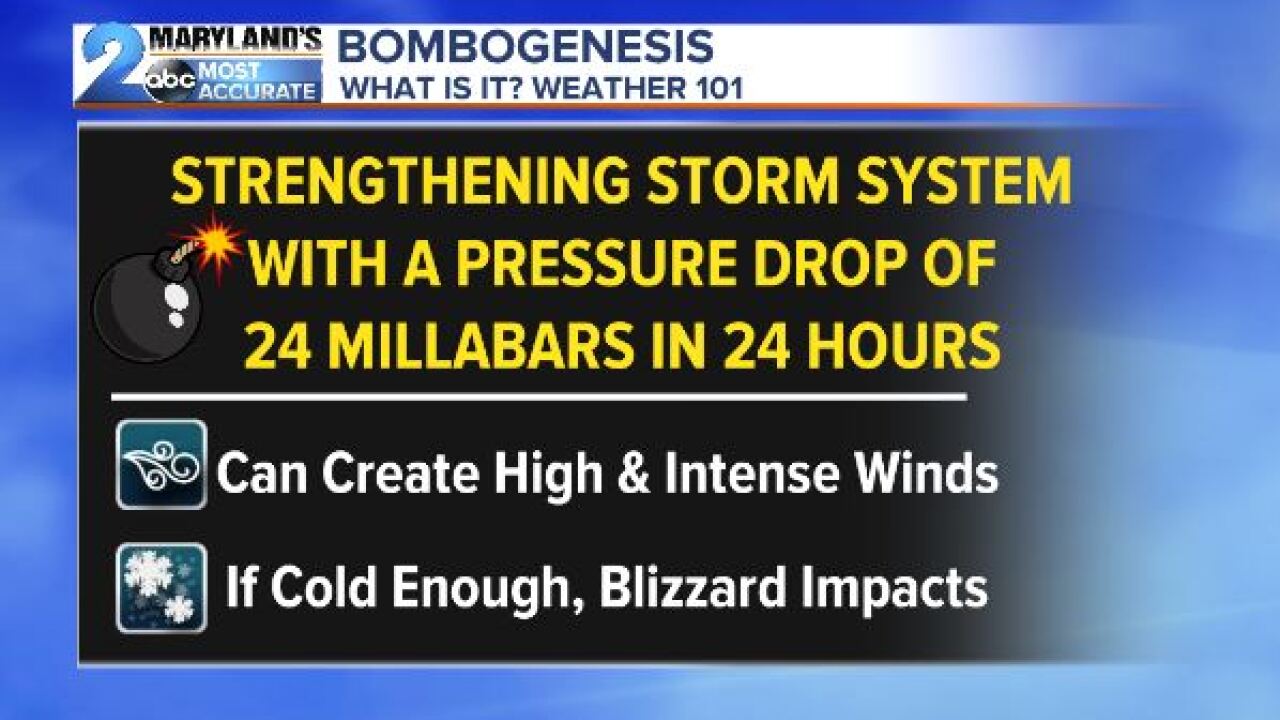 BALTIMORE — Well if social media is working for you today you have probably seen the terms "Bomb Cyclone" and "Bombogenesis". These words may be cool to say but they are actual weather terms of what is actually occurring in the Southern Plains.

So what is a "Bomb Cyclone"? A "Bomb Cyclone" is simply a term for when a storm system intensifies very quickly within a 24 hour period to bomb out. The technical term of course is "Bombogenesis". Bombogenesis is what a storm system's center of low pressure drops roughly 24 millabars within a 24 hour period. Here is Maryland we typically see this in the winter months with "Nor'easters" or coastal storms.

When an intense drop in air pressure like this occurs more air is drawn into the storm center creating the rapid intensification and impacts at the surface. These impacts in the case of our current storm are high winds over 800 miles worth of real estate and blizzard alerts for much of the front range Rocky Mountains.

This monster storm has already broken many records based upon the low pressures recorded at the surface. In Dodge City, Kansas the "Lowest Atmospheric Pressure" in 100 years was recorded at 3:55pm CDT. 974.7mb was recorded on the barometer beating the old record of 974.9 in February 1960. Meanwhile in Colorado a 33 mb pressure fall was recorded in Pueblo, Colorado over a 24 hour period with winds gusting over 97 mph in Colorado Springs, Colorado. Truly a storm to remember and eerily similar to events that happened 26 years ago to this day.

What a coincidence a "Bomb Cyclone" in 2019 and the "Superstorm of 1993" falling on the same date. The "Storm Of The Century" dumped feet of snow from Alabama north to Maine while killing over 300 people. Here in Maryland one of the lowest pressure's in Baltimore history was recorded at 28.51 Inches of Mercury.

As far as this go around this storm will be less of a monster as it approaches Maryland. For now we will enjoy the benefits of warmer temperatures with highs in the 60s to near 70 degrees Thursday and Friday before the system advances our way. Friday will be the day of impacts with a few showers to start followed by gusty winds and thundershowers in the afternoon. Right now it does not look as if we will see severe weather but instead gusty showers as winds come in from the west and northwest upwards of 30-40 mph.

Breezy conditions will continue into the weekend as colder air rushes back in.