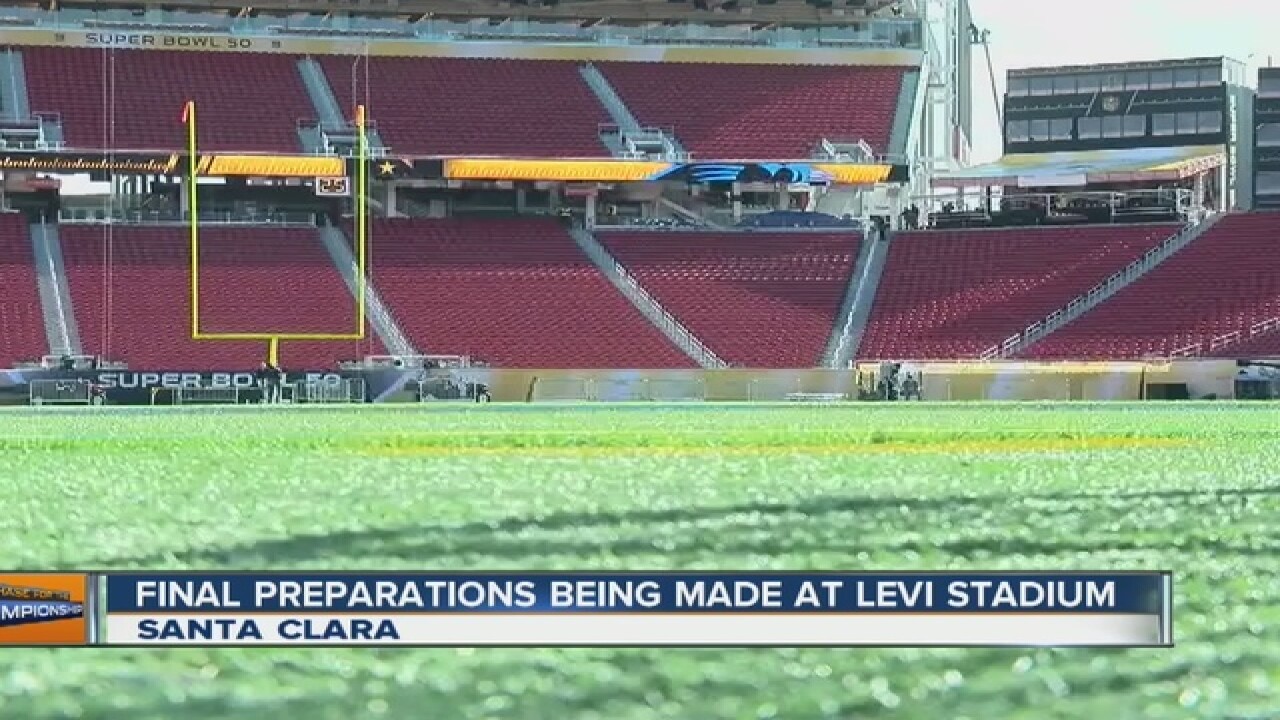 Their task is made more difficult by the location of Super Bowl 50, some 45 miles from downtown San Francisco, and a number of events throughout the sprawling Bay Area in the run up to the game in Santa Clara on Sunday.

"The challenge of this event is that it is really two separate, but related events many miles apart," said FBI counterterrorism agent John Lightfoot, who is in charge of the agency's Super Bowl detail. "That means we need more resources than previous games."

Federal authorities are deploying bomb-detection experts, SWAT teams and undercover agents immediately outside Levi's Stadium where Super Bowl 50 will be played. As many as 60 federal, state and local agencies are involved in Super Bowl security, officials estimated.

The FBI opened a multi-agency command post last week about six miles from Levi's Stadium that will be continuously staffed through Sunday. Lightfoot said about 20 different federal, state and local law enforcement agencies will man the command post.

"Our No. 1 goal is to identify and prevent an act of terrorism," Lightfoot said.

Federal officials say there is no indication of trouble brewing, but recent terrorist attacks have heightened awareness.

Three suicide bombers tried to enter Paris' Stade de France during an international soccer match and ended up detonating their devices outside the stadium as part of a coordinated attack there in November. In San Bernardino, a married couple killed 14 people and injured another 22 attending an office Christmas party on Dec. 2.

In particular, officials say they are concerned with "lone wolf" attackers who are not directed by terror networks but are inspired by their rhetoric.

"We worry about them all the time," Lightfoot said. "It's much easier for us to identify organizations than one or two people acting on their own. It's really hard for us to get ahead of that."

The Santa Clara Police Department is operating another command center at the stadium, which will be equipped with cameras with facial recognition and other high-tech surveillance gear.

Signs of beefed up security are visible throughout the San Francisco Bay Area.

Pilots with the U.S Department of Energy's National Nuclear Security Administration are flying low-altitude helicopter patterns up and down the coastal region, testing for spikes in radiation levels that could indicate a dirty bomb. DOE officials are monitoring the flights from the FBI's command center.

The Department of Homeland Security is also monitoring the air, looking for signs of chemical and biological attacks. DHS officials placed strange-looking metal boxes with wheels and "snorkels" attached atop 6-foot poles in the heart of San Francisco's financial district. The boxes are "air sniffers" meant to detect increases of dangerous chemicals or biological agents.

The San Francisco Police Department has opened a third command center in the city where it monitors the Super Bowl City and other game-related events in the city, where street sales of game tickets are prohibited.

Visitors to the Super Bowl Village in downtown San Francisco must pass through metal detectors and are greeted by city police officers dressed in green fatigues and guarding the area with assault rifles. Security officials can be seen watching the area from atop nearby buildings.

"We plan for everything we can think of and hope none of it happens," San Francisco Police Chief Greg Suhr said.