Copyright 2018 Scripps Media, Inc. All rights reserved. This material may not be published, broadcast, rewritten, or redistributed.
Todd Olszewski
<p>The Orioles will wear special jerseys with Braille lettering for their Sept. 18 game as a way to recognize the National Federation of the Blind. <em>(Photo courtesy of the Baltimore Orioles)</em></p>
By: Zachary Babo
Posted at 12:21 PM, Sep 05, 2018

Baseball has experimented with some creative uniforms recently, from letting players use nicknames to translating jerseys into different languages.

But for their upcoming Sept. 18 game against the Toronto Blue Jays, the Orioles will showcase a whole new alphabet.

Commemorating the 40th of anniversary of the National Federation of the Blind moving its headquarters to Baltimore, the O’s will don their home whites adorned with Braille lettering. Player names and the team moniker will both be represented in Braille. The Orioles will be the first team in American professional sports to use Braille lettering in gameday apparel.

Following the game, the jerseys will be autographed and auctioned off online, with the proceeds benefiting the National Federation of the Blind.

The first 15,000 fans in attendance at the game will receive a NFB/Orioles Braille alphabet car, distributed by NFB volunteers.

Invented in the early 1800s by Louis Braille in France, Braille is a system of raised dots that represent letters, numbers, or words. A full Braille cell contains six raised dots in two parallel rows, three dots per row, allowing for 64 possible combinations of dots for each cell.

In addition to the Braille cards and jerseys, the festivities for the night will begin with Carlos Alberto Ibay, an accomplished concert pianist and singer who has been blind since birth, performing the national anthem. President of the National Federation of the Blind, Mark Riccobono, will through out the first pitch.

For those wanting to learn more about Braille or the efforts of the National Federation of the Blind, members of the NFB will be at the OriolesREACH Community Booth near Gate D during the game to talk with interested fans.

“The National Federation of the Blind is proud of our 78 years of working together to help all blind Americans live the lives they want,” said Riccobono. “For forty of those years, we have coordinated that work from our headquarters here in Baltimore, where we have invested tens of millions of dollars to create a top-notch facility that benefits our organization and the surrounding community. We appreciate this opportunity to partner with our hometown baseball team to share our mission, particularly our commitment to literacy through Braille education, with our fellow Orioles fans.”

Click the picture below to see images of the commemorative Braille jerseys: 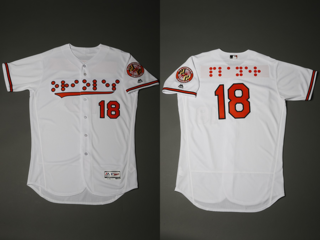