The Loyola Greyhounds held serve at home, dispensing of the University of Virginia 14-12 in Saturday's First Round action of the NCAA Division I Men's Lacrosse Tournament.

Junior attackman Pat Spencer led the way for Loyola with two goals and three assists in the win. Goalie Jacob Stover came up with seven saves.

The Greyhounds now advance to take on Yale at noon on May 19 in the NCAA Quarterfinals played at Hofstra University in Hempstead, N.Y.

Loyola is not the only Maryland-area team that remains alive in the hunt for a lacrosse championship.

The University of Maryland topped Robert Morris 14-11, Saturday. They move on to play Cornell on May 20 in a quarterfinal double header at Navy Marine Corp Memorial Stadium in Annapolis, Md. Duke takes on Johns Hopkins the other half of that double header, as the Blue Jays survived Georgetown 10-9 in overtime Sunday.

In the woman's bracket, Navy bested Johns Hopkins 16-9 Friday, then topped Loyola 19-15 Sunday, for a date against Maryland at noon on May 19. The Terps topped Denver 15-4 Sunday. Towson took down Wagner 16-6 on Friday, but fell to Northwestern 21-17 Sunday.

In the Men's Division III tournament, Salisbury hosts Dickinson and York travels to the Rochester Institute of Technology, both at 7 p.m. on May 16.

Click the picture below to see more photos from Saturday’s game: 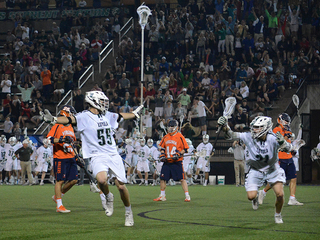