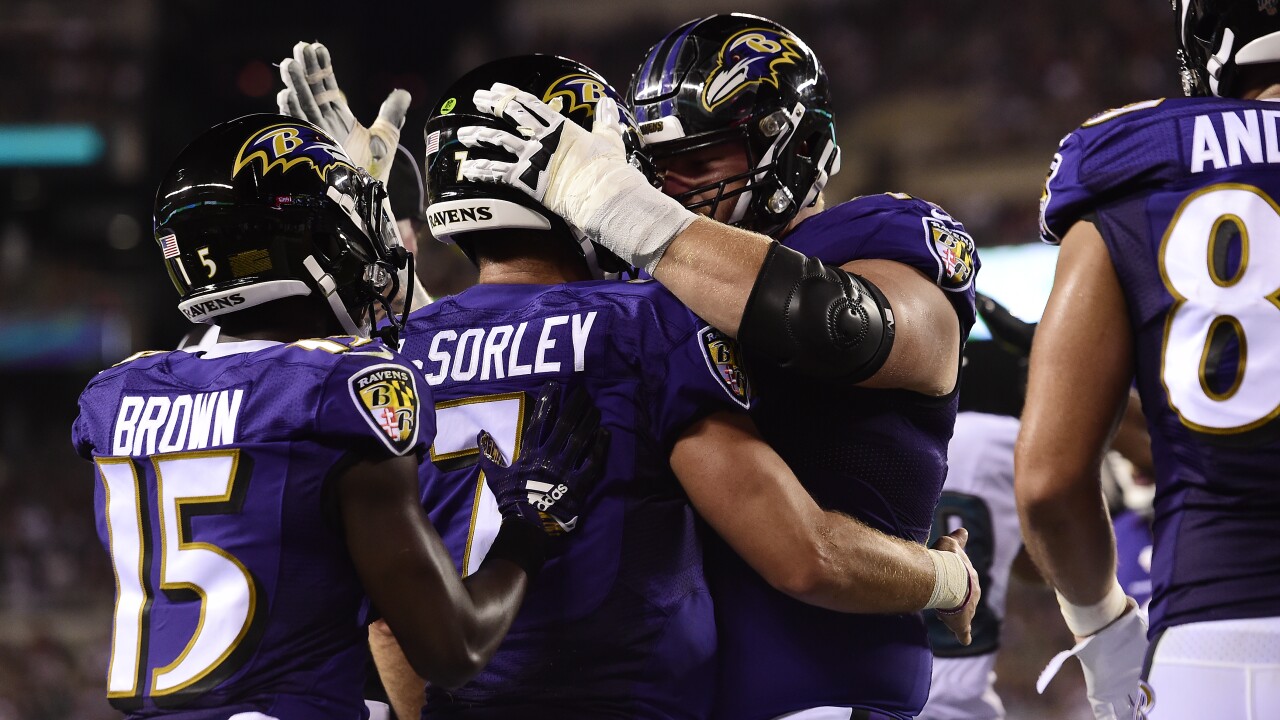 Patrick McDermott/Getty Images
PHILADELPHIA, PA - AUGUST 22: Trace McSorley #7 of the Baltimore Ravens celebrates with his teammates after scoring a touchdown in the first half during a preseason game against the Philadelphia Eagles at Lincoln Financial Field on August 22, 2019 in Philadelphia, Pennsylvania. (Photo by Patrick McDermott/Getty Images)

PHILADELPHIA, Md. (AP) — Trace McSorley will be too valuable for special teams with performances like this.

The rookie quarterback threw for 203 yards and two touchdowns and also ran for a score, helping the Baltimore Ravens beat the Philadelphia Eagles 26-15 Thursday night for their 16th straight preseason win.

The game was stopped by the NFL with 11:43 remaining in the fourth quarter because of lightning after a short delay.

Carson Wentz again sat out for the Eagles, but several starters saw their first action this summer and Josh McCown made his debut after ending his brief retirement to play his 18th season.

With Ravens starter Lamar Jackson watching from the sideline and Robert Griffin III still out with a thumb injury, McSorley solidified his roster spot. The sixth-round pick from Penn State has also been practicing on special teams throughout training camp.

McSorley threw TD passes of 28 yards to Michael Floyd and 7 yards to Jaleel Scott. He scored on a run from 4 yards out.

The teams held joint practices on Monday and Tuesday, giving both starting quarterbacks plenty of reps against the opposing defense in a controlled setting.

McCown tossed a 20-yard TD pass to J.J. Arcega-Whiteside and a 9-yarder to Alex Ellis in the third quarter.

McCown was signed after the Eagles lost backup Nate Sudfeld and No. 3 quarterback Cody Kessler in the first two games. Kessler returned from a concussion suffered last week and was 3 of 5 for 34 yards.