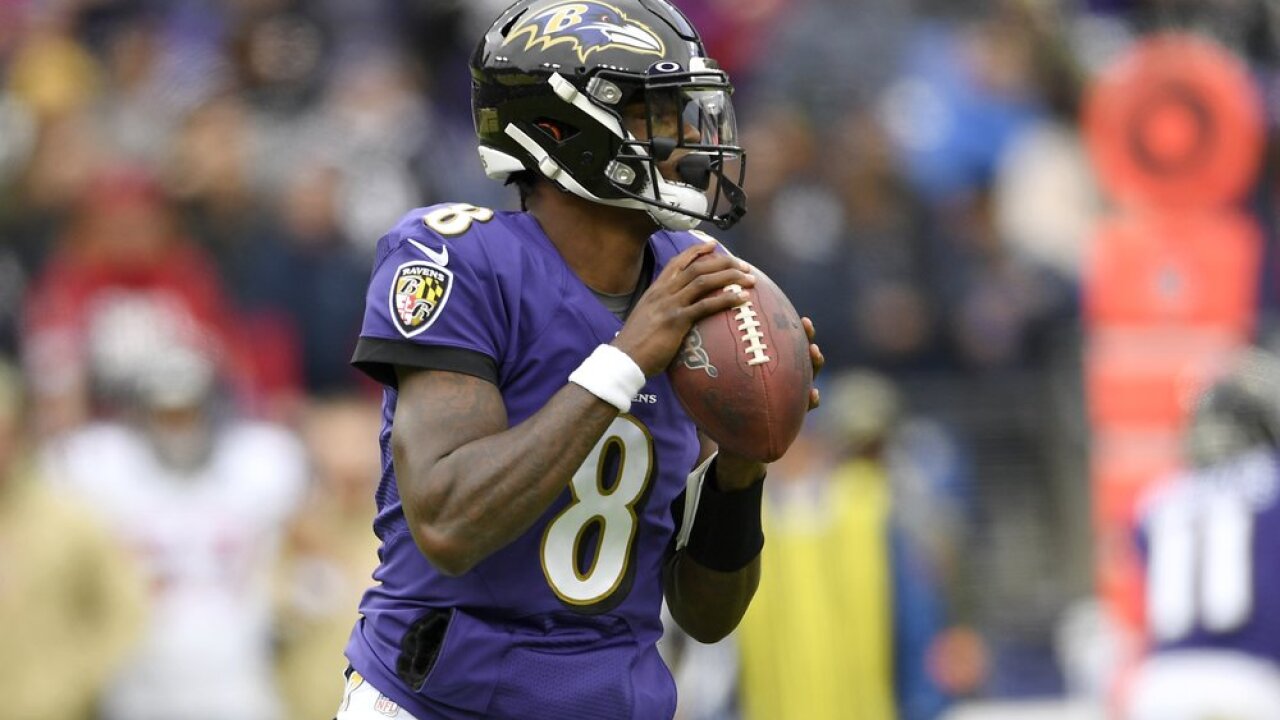 AP Photo/Nick Wass
Baltimore Ravens quarterback Lamar Jackson looks to pass against the Houston Texans during the first half of an NFL football game, Sunday, Nov. 17, 2019, in Baltimore.

Baltimore (12-2) took control with touchdowns on its first three possessions and Jackson made it 28-7 in the third quarter with a 24-yard scoring pass to rookie Marquise Brown following a turnover by New York (5-9).

That was enough to assure the Ravens another division title after they clinched a playoff berth four days earlier in Buffalo. With a victory next week in Cleveland, the Ravens will be assured the top seed in the AFC, a distinction that comes with home-field advantage leading up to the Super Bowl.

Jackson ran for 86 yards (on eight carries) to break Michael Vick's single-season record for a quarterback. Jackson has 1,108 yards rushing. Vick had 1,039 for Atlanta in 2006.

On this night, however, Jackson did most of the damage with his right arm. He completed 15 of 23 passes for 212 yards and increased his NFL-leading total of touchdown passes to 33, tying the franchise season record set by Vinny Testaverde in 1996.

After Jackson's pass to Brown, many in the crowd of 70,545 chanted "MVP! MVP!" There was a reprise of the mantra late in the third quarter when Jackson hit Seth Roberts for a 33-yard touchdown. The score came after Jackson connected with tight end Mark Andrews for a 36-yard completion on a fourth-and-1 from the Baltimore 29.

Jackson celebrated the first down by dancing downfield with his arm pointing toward the New York goal line. Not once throughout his exceptional performance did Jackson show any sign of being slowed by a quadriceps injury that made headlines in the days leading up to the game.

The Jets, meanwhile, hardly looked like a team that had won four of their previous five games. Sam Darnold threw two touchdown passes to Jamison Crowder but the second-year quarterback also tossed an interception and lost a fumble.

The first turnover ruined a potential scoring drive near the end of the first half and the latter miscue immediately preceded Jackson's TD pass to Brown.

The Jets' other touchdown came on a blocked punt in the fourth quarter.

New York's defense came in ranked second in the NFL against the rush, but the unit was no match for the league's top running game. The Ravens amassed 218 yards on the ground, including 76 by Mark Ingram.

Jackson broke Vick's rushing mark on Baltimore's opening possession while guiding the Ravens on an 84-yard march. The dual-threat quarterback ran three times for 27 yards and completed all three of his passes for 41 yards before Ingram ran in from the New York 6.

Jackson supplanted Vick in the record book with a 5-yard run from the Jets 11.

It was more of the same on Baltimore's second drive. A 29-yard run by Ingram and a 25-yard impromptu jaunt out of the pocket by Jackson preceded a 5-yard touchdown pass to rookie Miles Boykin.