Ravens defeat Browns and stay in the hunt for Wildcard 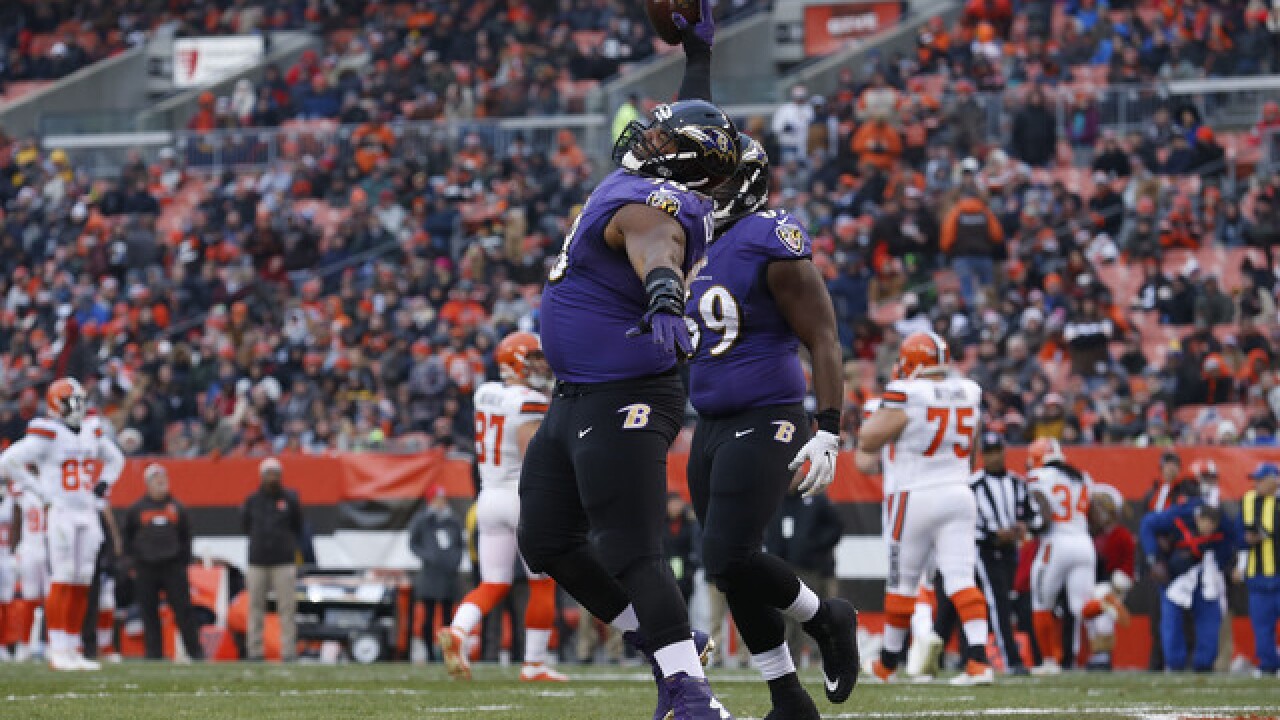 Copyright 2017 Scripps Media, Inc. All rights reserved. This material may not be published, broadcast, rewritten, or redistributed.
Kirk Irwin
<p>CLEVELAND, OH - DECEMBER 17: Brandon Williams #98 of the Baltimore Ravens celebrates a fumble recovery for a touchdown in the third quarter against the Cleveland Browns at FirstEnergy Stadium on December 17, 2017 in Cleveland, Ohio. (Photo by Kirk Irwin/Getty Images)</p>

Joe Flacco threw a touchdown pass, ran for a score and beat Cleveland again as the Baltimore Ravens stayed on track for the AFC playoffs with a 27-10 win Sunday over the Browns, now two losses from becoming the NFL's second 0-16 team.

Flacco scored on a 2-yard run and threw a 33-yard TD pass to Benjamin Watson as the Ravens (8-6) took control with two touchdowns in the final 3:01 of the first half.

Defensive tackle Brandon Williams recovered a fumble and rolled in for a TD in third quarter to put the Ravens up 24-10.

The Browns (0-14) went 0-8 at home -- 0-7 in Cleveland, 0-1 in London -- for the second time and must win at either Chicago or Pittsburgh to avoid joining the 2008 Detroit Lions in the notorious 0-16 club. Last season, the Browns avoided infamy by winning their final home game and finishing 1-15.

Cleveland is 1-29 in two seasons under coach Hue Jackson, who is expected to be back despite his .033 winning percentage.

Browns rookie quarterback DeShone Kizer threw two more interceptions, the last into a group of defenders in the fourth quarter.

Ravens coach John Harbaugh wasn't concerned about his team overlooking the Browns with so much on the line. Baltimore was coming off a last-second, 39-38 loss at Pittsburgh last week, and while the Ravens weren't at their best, they didn't do anything to help Cleveland.

With victories at home over Indianapolis and Cincinnati in its last two games, the Ravens will return to the postseason after a two-year absence.

Flacco completed 26 of 42 passes for 288 yards and improved to 17-2 in his career against Cleveland.

With the Ravens leading 17-10, Baltimore's defense put away the Browns.

Kizer was stripped in the end zone by Za'Darius Smith and the loose ball was pounced on by Williams, who shimmied his 340-pound frame across the goal line.

Later, Kizer forced a throw to the back of the end zone that could have been picked off by three Ravens.

Cleveland was held to zero total yards in the first quarter, but the Browns went on a 96-yard drive -- Isaiah Crowell ran for 59 on the first play  -- to take a 7-3 lead on Duke Johnson's 12-yard run.

After reaching the end zone, Johnson knelt with teammates before flashing "5-0" with his hands to salute Steelers linebacker Ryan Shazier, who is recovering from back surgery.