In the 116th meeting between the two teams, Maryland and Johns Hopkins added another epic chapter to a series that has become known simply as "The Rivalry," Saturday in Baltimore.

The overflow crowd of more than 10,000 got what they paid for and more, as a nip-and-tuck game saw Maryland rally late to tie the contest at seven and push for extra sessions. The tension continued for three additional overtimes, before Will Snider stuck the game winning shot of a Logan Wisnauskas feed.

The goal was only the fourth of Snider's career, whose older brother Drew was a star for the Terps before graduating in 2012. With the win Maryland captured the Big Ten Men's Lacrosse regular season championship and is the No. 1 seed in the conference tournament that unfolds at the University of Michigan next Friday and Sunday.

Check out a gallery of action shots from Saturday's game between Maryland and Johns Hopkins.

Click the picture below to see items we've highlighted in our newscasts: 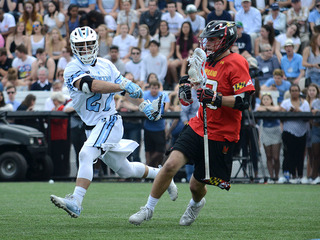