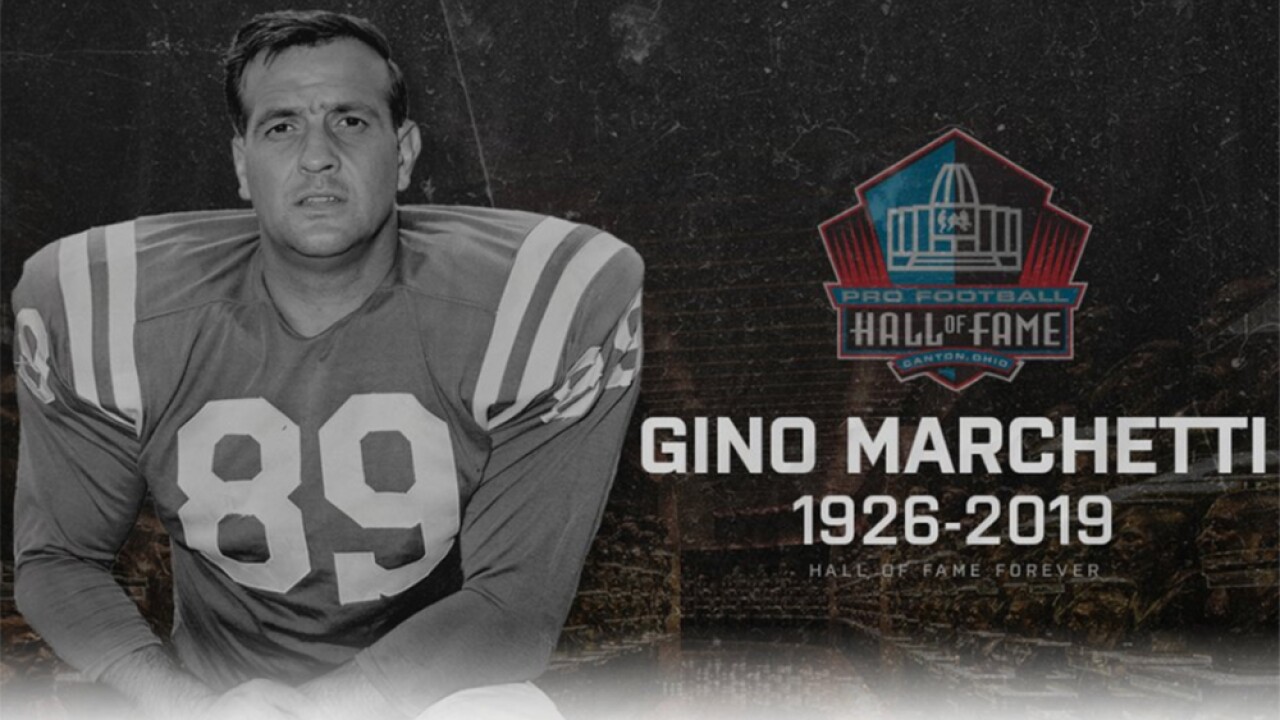 BALTIMORE — Gino Marchetti, a Hall of Fame Defensive End who played 14 seasons in the NFL, passed away at 93.

The NFL great and local hero played 13 of those seasons for the Baltimore Colts after starting his career with the Dallas Texans, participating in 161 games in that stretch, according to the Pro Football Hall of Fame. He was named to 11-consecutive Pro Bowls, a league record at the time, and was selected nine times for the All-NFL team.

“A giant of a man with a giant heart who helped many in need, Gino Marchetti is at or near the top of the greats in Baltimore athletic and football history,” the Baltimore Ravens said in a statement. “Beloved in Baltimore, this Pro Football Hall of Famer loved our community and the fans who were so special to him. Our thoughts and prayers are with his wife, Joan, and the Marchetti family. We appreciate the kindness and respect Gino showed the Ravens over the last 23 years.”

He became one of the most feared defensive ends in professional football during his career, as the 6 feet, 4 inch tall, 244-pounder terrorized back fields for the Colts. He was a member of the team’s 1958 and 1959 NFL Championship campaigns. In the epic battle that would become known as “The Greatest Game Ever Played,” Marchetti would suffer his worst career injury while making a stop for the Colt defense. The game was one of the first to be televised, as the New York Giants hosted the Colts for the 1958 championship. The contest would go into overtime, with the Colts ultimately prevailing 23-17.

“Gino Marchetti dominated the football field during his career in the 1950s and ‘60s as a leader of the great Baltimore Colts teams of that era,” Pro Football Hall of Fame President & CEO David Baker said in a statement. “His ferocious style of play defined the character of a man who possessed a strong desire to succeed, passion, and determination that made him a great teammate. Those same traits made him a highly successful business leader after his playing days. The legacy of Gino Marchetti’s well-lived life will forever be preserved in Canton, Ohio to serve as inspiration to future generations of fans.”

In 1957, Marchetti would build a well-known piece of his off the field legacy, joining a group of friends and teammates to create the Gino’s Hamburgers chain of fast-food restaurants. The business expanded to multiple locations in and around the Baltimore/Washington, D.C. area. A new restaurant group purchased the name and rebranded the establishment Gino’s Burgers & Chicken.

Marchetti was also a veteran, serving in the U.S. Ary's 273rd Regiment of the 69th Infantry Division and participating in the famous World War II engagement the Battle of the Bulge as a machine gunner, according to the Hall of Fame.

Marchetti is being interred at Alleva Funeral Home in Paoli, Pa.