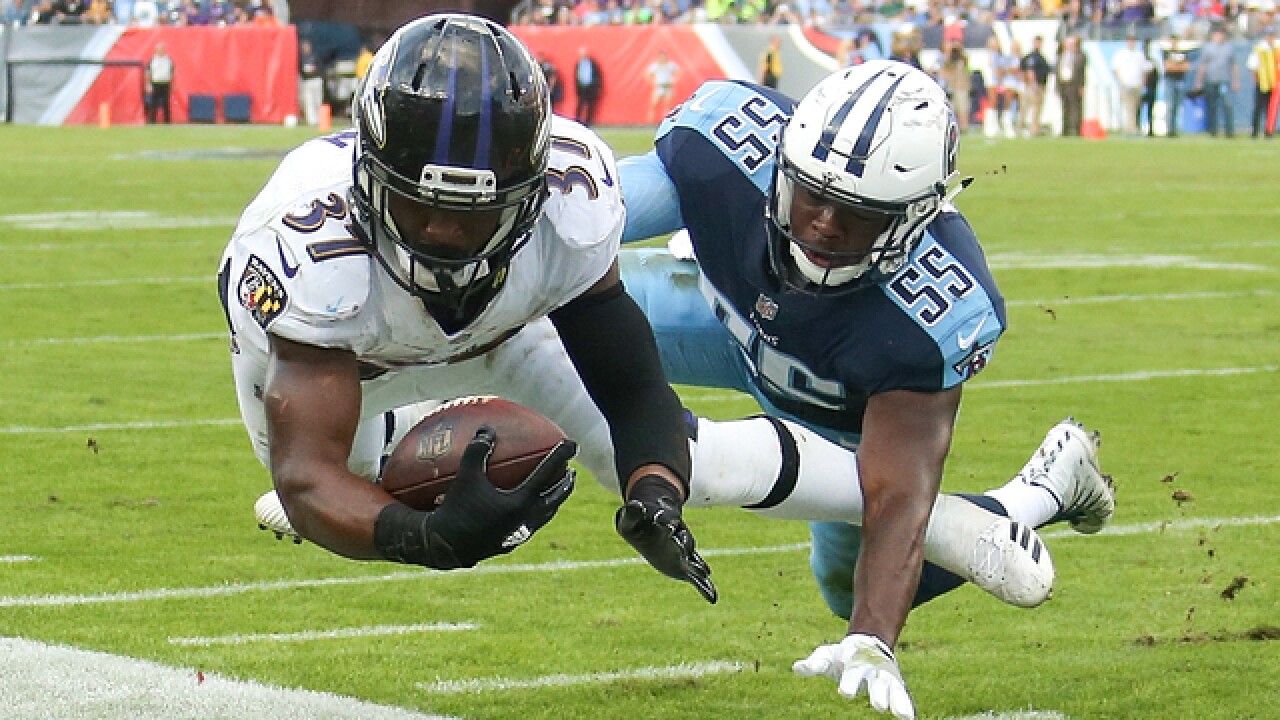 Image copyright 2017 Getty Images. All rights reserved. This material may not be published, broadcast, rewritten, or redistributed.
Frederick Breedon
<p>NASHVILLE, TN - NOVEMBER 05: Javorius Allen #37 of the Baltimore Ravens dives towards the endzone pylon but comes up short as he is tackled by Jayon Brown #55 of the Tennessee Titans during the second half at Nissan Stadium on November 5, 2017 in Nashville, Tennessee. (Photo by Frederick Breedon/Getty Images)</p>

Marcus Mariota threw for 218 yards and two touchdowns, and the Tennessee Titans beat the Baltimore Ravens 23-20 Sunday for their third straight victory.

The Titans (5-3) also sacked Joe Flacco twice and scored 13 points off Byard's first interception and a shanked punt to stay atop the AFC South.

The Ravens (4-5) have lost three of four going into their bye despite outgaining Tennessee 341-257.

Flacco tried to rally the Ravens with two TD passes in the final 8:56, the last a 1-yard pass to Mike Wallace with 46 seconds left pulling Baltimore within 23-20.

Eric Weddle started the rally by picking off Mariota's overthrown pass for a Baltimore defense that came in with an NFL-best 12 interceptions. Flacco hit Javorius Allen with a 3-yard TD pass with 8:56 left to pull the Ravens within 16-13.

The Titans answered with a 75-yard drive Mariota capped with an 11-yard TD pass to Eric Decker with 3:58 left for the winning TD.

The Titans had their best opening quarter of the season and led 10-3. Mariota threw his first TD pass inside an opponent's 20 of the season, and it also was the Titans' first TD in the first quarter since the season opener. The Titans finished with touchdowns on all three drives inside the Ravens 20.

Titans running back DeMarco Murray finally got off the injury report this week, but he hurt a knee in the second quarter. He returned and finished with 19 yards on nine carries.

Ravens left tackle Ronnie Stanley hurt a shoulder at 8:17 of the third quarter, and he was replaced by left guard James Hurst. Luke Bowanko took over at left guard. Stanley returned in the fourth quarter, but he threw up with 51 seconds left was he walked to the line of scrimmage. He went to the sideline.

The Titans finally used cornerback Adoree Jackson on offense for the first time this season, sneaking the speedy rookie onto the field on their opening drive. He appeared to bobble the handoff, then went up the middle for a 20-yard gain. But Matthew Judon sacked Mariota on third down, forcing the Titans to settle for a field goal.

The Ravens answered on the next drive with a fake punt, and punter Sam Koch hit Chris Moore for 16 yards on fourth-and-7. Titans cornerback Brice McCain was flagged for a facemask with Moore's helmet coming off to reach the Tennessee 13. But the Ravens settled for a 30-yard field goal by Justin Tucker.