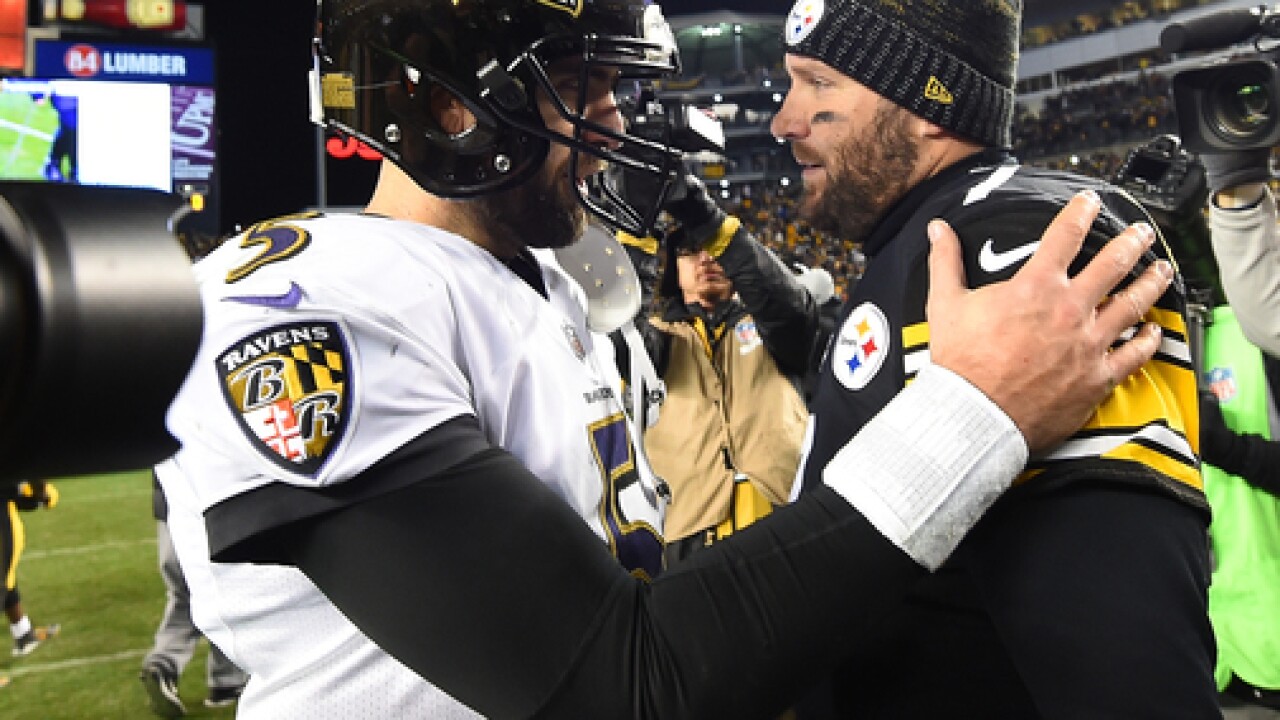 Copyright 2017 Scripps Media, Inc. All rights reserved. This material may not be published, broadcast, rewritten, or redistributed.
Joe Sargent
<p>PITTSBURGH, PA - DECEMBER 10: Ben Roethlisberger #7 of the Pittsburgh Steelers meets Joe Flacco #5 of the Baltimore Ravens at mid field after the conclusion of the Pittsburgh Steelers 39-38 win over the Baltimore Ravens at Heinz Field on December 10, 2017 in Pittsburgh, Pennsylvania. (Photo by Joe Sargent/Getty Images)</p>

Ben Roethlisberger's record-setting day finished with a carry just as valuable as any of the franchise-record 66 passes he threw.

As the Pittsburgh Steelers poured onto the Heinz Field turf to celebrate a frantic 39-38 victory over Baltimore that wrapped up their third AFC North title in four years, Roethlisberger grabbed the familiar No. 50 jersey of injured linebacker Ryan Shazier and joined in the party.

An emotionally draining week for the Steelers ended with Shazier recovering from spinal surgery in a nearby hospital but still very much in the middle of things. Just like always.

"We love our brother," Roethlisberger said. "We wanted to get this one for him, and I'm glad we did."

The Steelers (11-2) blew an early 14-point lead and found themselves trailing by 11 going into the fourth before exploding for 19 points over the final 15 minutes, the last three coming on Chris Boswell's 46-yard field goal with 42 seconds left.

Having an offense that is starting to peak after a sleepy start certainly helps. Roethlisberger threw for 506 yards and two scores to become the first player in NFL history to go over 500 yards passing three times in his career. Antonio Brown caught 11 passes for 213 yards to fuel an MVP candidacy that no longer feels so far-fetched, including gains of 57 and 34 yards in the fourth to spark Pittsburgh's comeback and running back Le'Veon Bell finished with 125 total yards and three scores.

"It's an amazing feeling, especially for Ryan Shazier," Brown said. "One of our brothers couldn't be out here today. Obviously, he is watching."

Shazier suffered his injury in the first quarter of a victory over Cincinnati last Monday. He underwent surgery on Wednesday and Roethlisberger visited him on Thursday.

"When you walk in and see him and see the smile and give him a huge, it really has taken that weight off and let us breathe a little easier," Roethlisberger said.

The Steelers have done their best to let Shazier know is very much a part of their run. Linebacker James Harrison borrowed a page from Shazier's pregame routine and warmed up shirtless even with the temperature hovering around freezing. Shazier's helmet and jersey spent the game on the bench and several Steelers wore cleats with a special design featuring Shazier's face and the popular (hash)Shalieve hashtag.

"It was very emotional," linebacker Arthur Moats said. "Any time you can bring something to him that brings him some type of joy, some type of happiness, that's good. At the end of the day we're just trying to make sure he's good."

Baltimore (7-6) meanwhile, saw its surge back to contention blunted after its defense spent the fourth quarter fruitlessly chasing Brown from one side of the field to the other.

"This is going to sting for a while," Ravens safety Eric Weddle said. "Especially the guys on defense because we care so much and we hold ourselves to a high standard."

The Ravens certainly didn't meet it after giving up 545 yards to the Steelers. Pittsburgh scored on its last four possessions. It's not like the Steelers were taking advantage of a short field. All eight of their scoring drives went at least 50 yards, including two of 80 or more.

"I think in the fourth quarter the defense dropped the ball tonight," linebacker Terrell Suggs said. "That's kind of been our thing all year, consistency."

The win sets up the AFC game of the year next Sunday when Tom Brady and the defending Super Bowl champion New England Patriots visit. New England beat the Steelers twice last season, including a lopsided 36-17 blowout in the AFC title game.

"We're going to give respect where respect is due now," Pittsburgh center Maurkice Pouncey said. "But they're not Superman. They lost this season, right?"

Brown, Bell and Roethlisberger hardly did it alone. Boswell has hit four game-winning field goals in the final minute in four of Pittsburgh's past five games. Tight ends Jessie James and Vance McDonald combined for 14 receptions for 149 yards. Even fullback Roosevelt Nix got in on the act, scoring his first career touchdown on a 1-yard reception in which he basically pulled the ball off Baltimore safety Tony Jefferson's chest as they tussled in the end zone.

Baltimore: Their final three opponents are a combined 8-34, including the 0-13 Cleveland Browns, who the Ravens visit next Sunday.

Pittsburgh: The Steelers have beaten Brady at Heinz Field just once in his career, a victory in the 2011 regular season.